There are times in our lives when each one of us experiences some life-changing moments. The day I met Prof. Chittaranjan Das (1923-2011), whom many young adults of my age affectionately called Chitta Bhai, I knew that I was on the road to change.

I came across Chitta Bhai in 1988 when I attended a twenty days teacher’s training camp at Koraput, organized by New Life Education Trust, Odisha. I had decided to take up Integral education as my mission as I was inspired by the Integral vision of Sri Aurobindo and the Mother. At the camp all of us were eagerly expecting Chitta Bhai’s arrival. He arrived in the camp towards the end and was with us only for five days. He taught us many subjects from philosophy, psychology, sociology, art, music (Rabindra sangeet in particular) to integral yoga and integral education.

Chitta Bhai was a freedom fighter who was jailed twice for his participation in the Quit India movement. Later he studied philosophy at Shantinekatan. Afterwards he went to Denmark and Finland for higher studies. He had degrees in philosophy, psychology, sociology and cultural anthropology apart from mastery over more than 13 Indian and foreign languages. On his return to India, he opened a basic education school – Jivana Vidyalaya – at Champatimunda, on the outskirts of a forest in rural Odisha. 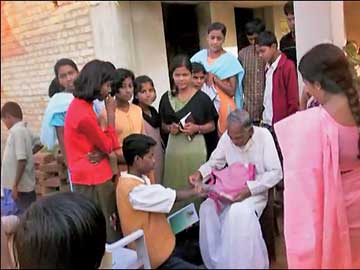 The most inspiring thing about him was that he was able to perceive the strength and potential of an individual and guide him/her accordingly. He would spontaneously forge a bond with the individual and stimulate him/her to grow in a natural way. He would openly criticize social systems, preconceived notions, pretences and contradictions vehemently, yet he was very tolerant and encouraged people to strive beyond their limitations.

Whilst at the camp, Chitta Bhai learnt that a teacher had been sacked and humiliated by the school authorities for questioning their stand on a petty incident. Chitta Bhai criticized the narrow-mindedness of the authorities and saw to it that the teacher was absorbed in another school. This incident revealed his compassionate nature.

In another incident, some students from the Integral school used to come to him to learn Maths and English. One day I got a chance to observe his interaction with students. While correcting some of the class work, he pointed out a mistake to a child. The child immediately struck off his answer with a cross mark. Seeing this, Chitta Bhai asked him “Why did you do that? Isn’t it a part of you? Do you need to hate the mistake and like only the correct answers? Though he was talking to the child, I knew that his comment was also directed towards me. Through this small incident, he brought about a change in my attitude and helped me accept things as a whole.

Once in the camp we were encouraged to read from Gandhiji’s collected works. When I read it, I found that I could draw parallels to it in the teachings of Sri Aurobindo. When I shared my observation with Chitta Bhai, he simply said, “Truth has no ownership”. This simple statement altered my perception and I realized the impersonal quality of Truth.

The full exposure of his inspiring presence and strength worked in the camp of Suhrud Goshthi which was formed as an alternative to forge a link between the theory and practice of Sri Aurobindo’s teachings. Suhrud Goshthi was open to people of all ages. The group met twice a year at different Integral schools in Odisha. The camps were held in a rural school. The campers worked manually for four to five hours to support the schools. The daily schedule was very uplifting. From singing songs, to doing physical labour, to having open ended discussions, every day at the camp was enriching.

Each moment demanded from us a heightened state of awareness and response. It was as if every moment, every incident was turned into a learning opportunity by Chitta Bhai’s touch. He opened up our perception to all the doors of knowledge.

Suhrud Goshthi is still active even after Chitta Bhai’s passing away in February 2011. Many teachers from integral schools – Integral schools are more than 500 now – meet twice in a year in one of the Integral Schools.

The author has been working with Sri Aurobindo Integral Schools and Rajghat Basant School, Varanasi. He now teaches history at ‘Anubhuti’ school, Jalgaon, Maharashtra. He can be reached at alokbadal@gmail.com.