When I look back at the path that I have traversed so far in life, the most cherished moments are those that I have spent with people who have inspired and encouraged me to be a better human being. Amongst such people, I can count my teachers as having played a very vital role in making me the person I am. I consider myself to have been lucky enough to be guided into the world of knowledge and learning by teachers who did not think that teaching was merely a profession, but instead considered it a divine duty that could change lives. At several junctures in my life, when I felt that things were not going my way, my teachers gave me the strength and courage to keep striving. Though it is difficult to pick one experience out of so many that I fondly remember, I choose the following incident to illustrate the deep sense of affection that only perhaps a true teacher is capable of sharing with his or her student. 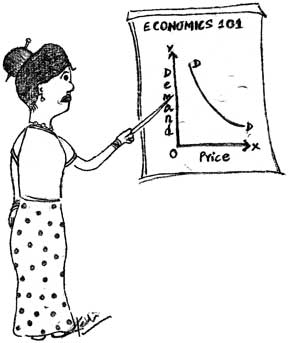 Santhakumary Madam taught me economics in the 11th and 12th standards. She was a perfectionist in every sense of the term. Never would she miss a class or give less than her best in throwing light on the intricacies of the subject. This was coupled with the insistence that her students rose up to her high expectations. One sometimes felt that she was being a little too demanding and some of her students felt uncomfortable under the pressure. For me, it was her encouragement that helped me score well in the final exams. When I was about to leave for Delhi to pursue my graduation, I met Santhakumary Madam at her residence and as per her request, handed over my economics class notebooks to her. She gave me her blessings and I left with a heavy heart, because she had treated me like the daughter she never had in the two years that I was her student.

Years later, after I had completed my post-graduation and was doing my MPhil in Delhi along with preparing for the civil services, I met Madam in Trivandrum. She gave me valuable words of encouragement and wished me all success in my preparations. Just before I was about to leave, her husband came up to me and said, “Nila, you must have forgotten about these, but for Santhakumary, these are like a treasure that she guards fondly,” and handed over those same notebooks that I had given her years before. Tears welled up in my eyes to see that she had taken so much care to preserve those notebooks, which contained the knowledge that she had imparted to me. I looked up at her but neither of us could express in words the emotions that we were experiencing. I touched her feet and she hugged me, wishing me all the best. When I left that house, I resolved to myself that I would not let my teachers down. And it is that resolution that still guides me in everything that I do.

The author is currently Deputy Commissioner, Lower Subansiri District at Ziro, Arunachal Pradesh. She is deeply interested in the issues of educational development of adolescent girls and underprivileged youths. She can be reached at nilamohanan18@yahoo.com.