Our discussion on How can a poem be made into a learning experience? continues with many more tested out ideas from teachers – as well as from those who are not teachers, but who have strong feelings on the subject.

Nalini Ravel began by saying: I really love the way this question has been worded, because I believe that poems cannot be ‘taught’. It is an expression of feelings and ideas of our heart and has to be felt with all one’s heart. I have always loved reading poems because they express emotions in a very beautiful way. And that is why I enjoy them equally with children.

She adopts the technique of singing the poem first: I always sang the complete poem while children listened to it with closed or open eyes, whatever suited them. Then they would sing it after me and finally with me. Pre-empting our query, she adds: How to compose music for a poem? No problem. Either set it to an already existing popular tune or ask the students to come up with a tune of their own. You will be amazed to see the amount of talent and creativity the children have! Another idea was to invite students to recite it. This meant that they would have sung and heard the poem several times and by these repetitions, the students would have understood the central idea of that poem without having to dissect it. They would have learned many interesting facts about it without much effort.

Indeed, this appeared to be a commonly adopted strategy in our staffroom. Attreyee Chatterjee is of a similar view, as she shares: A very interesting way of getting small children to learn a poem is by setting it to some catchy tune. The whole class may participate and contribute in making up the tune. A keyboard or harmonium as an accompaniment becomes an added attraction. I have done this with remarkable results. Sunita Sharma concurs: The key is to sing the lyrical poems. The musical element infuses life into words and the children almost always ask for more poems. Sunita candidly adds: The problem arises when I try to explain the ‘hidden meaning’ and/or the obscure use of some of the figures of speech. That’s when many students develop cold feet towards poetry. I try to give additional information about the poet, the period of composition, interesting anecdotes about a particular poem, yet I don’t see much change. Even the suggestion of reading aloud to self in solitude hasn’t been all that effective. I comfort myself with sowing the seed and hope that it’d flourish when the time is ripe.

That said, I wish to share my apprehension regarding the content used to teach language in schools. The selection invariably contains the best works of the greatest writers of all times. Most children connect with some of the best works, but a large part of the syllabus remains incomprehensible. This forced me to realize that probably none of the writers wrote for school children as their target audience. Subramanian Kavasseri is in agreement with Sunita’s concern, as he points out the importance of the choice of poem: From my own experience (as a student), choosing a poem is very important. It needs to have a profound but simple message with a dash of humor, a rhyme here and a rhythm there … it has to sound almost musical.

Chandan Jha describes an activity that he had conducted with mixed age-group children during a summer workshop on creative writing in Hindi. The children were first introduced to rhyming words and then, were asked to provide a rhyming word for another word given to them. As they practiced, they were told to read aloud some well-known poems (like “bandar mama pahan pajama….”) and they were then asked to sort out the rhyming words. When encouraged to discuss these words in small groups, they noticed that some rhyming words have no meaning at all – being used in the poem to fill the gap, to make it more rhythmic. After this exercise, some children were asked to say one sentence (it could be anything….literally anything that they felt like sharing with all) and when it was said, another child had to say another line/sentence that would rhyme. This process went on with seven to eight children, by which time, they realized that they can make their own poems, just by beginning with a single sentence. At the end of two days, children shared that they can think of poems and can even write their own poems.

However, every teacher may not want to lead the poetry class into a creative writing class. Sumitha Nath Raghavan shares how she goes about teaching a poem through three stages (interspersed are other responses): 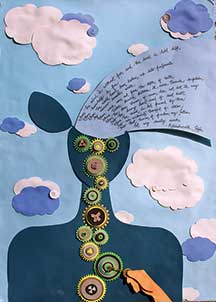 They can be asked to write a short poem based on the rhyme scheme followed in the poem that they have read. The activity can be modified to suit the age group. Here, Nalini Ravel shares some other after-poem activities, while teaching Hindi poetry. Apart from choosing their most-liked poem, and writing their own, she also adopts the following strategies –
Illustrate a poem. In this activity, the students illustrate the poem. After they are done, they display them on the wall. As they would go around looking at the display, I would then get them talking about the poems and sharing their impressions.

Look for poem/poems having the same emotion/mood After completing a particular poem, the students would be asked to find other poems with similar themes, and discuss them in class.

Do you know? Give a hand-out that poses questions about the mood of the poem, what it is describing, etc.

Attreyee adds her ideas to Sunita’s and Nalini’s above: After the kids have learnt a poem or song they can put up a little performance, as the appreciation they thus receive will encourage them to learn more new things.

In short, as Nalini says: There could be many more ways of making a poem a learning experience for the student. But I feel that the basic requirement for this is that the teachers should themselves love and enjoy poems, read them several times and let themselves immerse in it.

Our final instalment of this three-part discussion will touch upon the teaching of poetry to higher classes: do respond to the next question in the meanwhile, by sending your response to thinkingteacher22@gmail.com.