Inside a moving train, if we drop a stone we will see it fall down in a straight, vertical line. If we are inside the moving train but drop the stone outside the train, we will still see the stone falling in a straight, vertical line. To the falling stone, once released from Einstein’s (or anyone’s) hand, it makes no difference whether it is inside or outside the train. 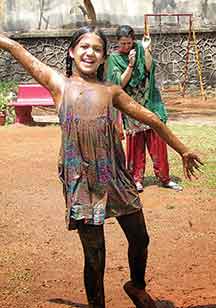 An observer outside the train, on the platform, (or on the embankment, as in Einstein’s tale), will see the stone come down in a parabolic path. As if it were not merely dropped but thrown. To those inside the train, moving forward at the same pace as the stone itself, the forward motion of the stone is invisible. We might say it is non-existent or cancelled out, like the motion of the earth – which we do not count when we are sitting still. Or when we drop a stone while sitting still.

Now the question Einstein asks us is: What did the stone do? Did it fall in a straight line or along a curve?

As Einstein goes on to explain in the rest of the book, Relativity: The Special and General Theory, questions of speed, distance and time become relative to the frame of reference.


* * * * *
Learning also takes many paths, perhaps all paths, as the quantum physicists say of particles. Is one path longer than another? Is it faster? Which parent or teacher is not familiar with this experience – in a conversation with a child, a series of ifs and buts arise, so that a simple point that you thought you could explain in five minutes gets deferred for hours or days. Meanwhile, as you follow the tangents, further questions arise. Is your original question forgotten? No, it is still out there, drawing you towards it via this loopy, squiggly, elliptical path. Any teaching that is based on a fixed notion of a direct path may not allow for such digression. It may even subtly discourage it. Yet the curiosity of children will keep these questions alive, patiently or impatiently awaiting their turn on the front burner.

If it takes two days to communicate a point that you thought would take five minutes, do you feel that time has been lost? What happens when teaching complex concepts and skills – what if your child learns something months or years after the expected date? Sometimes people who want to trust the journey of learning find themselves wondering,

Is this child slow? Is she/he falling behind? Will it be difficult to catch up later?
Will it hurt if I push her/him? At what point should I intervene?

Many people have written about these questions with well-reasoned points and evidence supporting a spectrum of approaches. Some suggest creative ways to encourage progress, indicators for intervention when there is no progress, or reassurance that it will happen in its own time.

But what is it? Do we know?

Maybe we do. Or maybe we only think we know.
Is my understanding, Wittgenstein asked, blindness to my lack of understanding? Often, he continued, it seems so to me2.

Me too! How often in school had I felt that I was expected to understand or at least pretend to understand something, glossing over whatever had made me reluctant to accept it. Years later, when I read Wittgenstein, this sentiment helped me understand my frustration, and reclaim my doubts throughout discussions of concepts such as normal force in physics or Sets in mathematics, considered too straightforward to interrogate.

“A set is a collection of objects,” I recall a teacher explaining. “So here, see this picture of various objects. I will draw a circle around it, now it is a set.”

Simple! But I did not understand. What exactly made this a set? Thinking back, it would probably have helped if someone had said, “The idea of a set is a complex. There is a lot more to learn about it and some of it doesn’t even make sense, but that is what makes it fascinating. Today we are going to look at some simple examples, where we just circle things, call them sets, and consider how some sets are similar to or different from others.”

“What makes something different?” That would have been my next question. Even if we didn’t pause right away to go down the roads exploring the definitions of sets, same, different, etc., it would have helped if we acknowledged that these were uncertain, and depended on more factors than we could ever pin down, rather than pretending that we knew just what they were and that the sensible response to a worksheet on the topic of sets was to circle the objects as instructed.

Such an acknowledgment is not unheard of. In fact, I can never forget the preface to my sixth grade maths book. Meant for the teacher, it stated that “In this book we do not prove the commutative property or the identity property.” Amazing! So even statements like a=a or a+0=a or a+b=b+a could be proved, meaning they could also be questioned. How happy I was that the authors of the maths textbook had chosen to confide this information to me.

Had they not done so, and regarded these equations as obvious, requiring no proof, then any question about them would have been regarded as pure nonsense, unthinkable. Now that they had acknowledged that it was indeed thinkable, not only could I patiently wait for higher level classes where we would be encouraged to think about such questions, but I could also have faith that the maths I was learning was part of something deeper, that touched the heart of what it meant to say a=a, indeed, what meaning was. 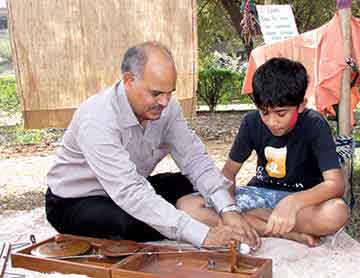 Learning
Let me tell a story.
From as far as we can remember, our daughter delighted in number, shape, order, series and various mathematical concepts. She would observe shapes and patterns and then one fine day tell us something about them that would wow us. She was equally thrilled to hear about math. Indeed she heard math in places we would not have expected, casually comparing a musical piece to a multiplication process.

Everything reminded her of math. While arranging her clothes in her shelves she referred to priority and order of operations. While overhearing us refer to combinations and permutations in the context of tracing old classmates she immediately corrected us – “you can’t have permutations!” Seeing our blank looks, she explained, “what would they do, enter the room in a different order?”

When it came to basic sums, though, she added on her fingers most of the time. Would this be considered late? Slow?

One day she arranged her dominoes in a pattern and called me to see that it served as an addition table3. She arranged the dominoes such that you find the two numbers that need adding in their respective row and column, find where they intersect, and then count up all the dots on that domino. Most of us who do one-digit addition without thinking about it would find this method time consuming. If she had learned addition by heart then would she have ever devised this addition table? Arranged in various patterns, the dominoes illustrate concepts that might take a greater understanding of math or number theory to describe in words. And they get to the heart of what it means to add.

I bring this example up because when we talk about how unschooling facilitates learning at one’s own pace, most people think it means that we need to be patient with “slow” learning but rarely do we get an example of learning that is made possible precisely because something else was not yet learned or was learned “slowly.”

If we rush to “understand” addition, as indicated by correctly and promptly adding given numbers, we may miss out on investigating what addition is, and what numbers are.

Had she memorized her basic addition facts, would she have devised an addition table? Perhaps. When? Would that have been considered late? Or slow?

What did she learn by making the addition table? How was this learning facilitated by the fact that addition had not yet been ticked off her list of skills to master?

For example – when coming across the phrase “first prime minister,” our daughter was not interested in the name corresponding to this epithet. She wanted to know what this phrase meant. A question about what the “first” of a kind could be, how a given specimen could be “first” of a kind at all. 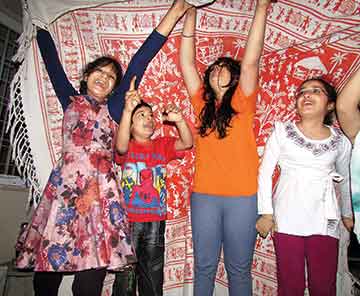 Her question: So did they already decide to call the person a Prime Minister?

As I collected my thoughts to answer, there came another question – But who, they?

A question about the nature of authority itself, who vests it in whom? (Is this history? Or math? Or politics? Or philosophy?)

And then: When did they call it India?

Those who “know” the answer to the question “Who was India’s first prime minister?” would probably answer the question, quiz-show style.

Slow learning empowers the learner over the learned and values the slow in the spirit of the movements for slow food, slow money, and slow love.

Of slow love, it is said, “Slow love is about knowing what you’ve got before it’s gone4.”

You can look up the name of the prime minister. But when you stop asking questions about first-ness and prime-ness, where do you go to tap into your earlier wonder about these concepts?