Constructing magic squares has been a pastime of many eminent mathematicians. Srinivasa Ramanujan, in addition to a number of astonishing mathematical formulae, was interested in entertainment mathematics as well. The first chapter of his two volume book is all about magic squares. In this article we will see a few examples of magic squares.

Odd magic squares
The simplest magic square is a 3X3 square. The transformation is indicated below.

The algorithm can be summarized as – corner numbers move three boxes forward. Middle numbers move one box backwards. This method is applicable for any set of natural numbers, odd or even or any block of nine numbers from a calendar.

Date magic square
Topping the innovations in magic squares is the use of random numbers as against the use of series numbers. In this magic square the top row contains a date in the dd/mm/yy/yy format. This automatically fixes the magic sum which is dd + mm + yy + yy.

It uses the two interesting identities already mentioned. The algorithm for making date magic squares can be learnt by any middle school student.

Here is a magic square where the first row represents Ramanujan’s date of birth – 22nd December 1887.

The magic sum is 22 + 12 + 18 + 87 = 139. The four numbers in the top row are given. By repeatedly applying the two identities already mentioned, we can fill three numbers in all the rows and columns.

Other empty cells are filled by adding the three numbers and subtracting from the magic sum.

Easiest magic square
One of the easiest algorithms for constructing an even magic square is given below.

The method is simple – reverse both the diagonals and retain the others. 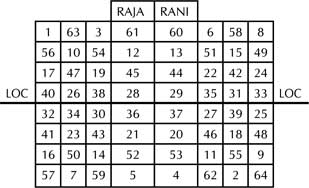 Starting with 1, alternate ascending numbers in alternate box. If RAJA comes, RANI with the next number. If NOT skip.

The method is applicable to magic squares in multiples of four and also suitable for a 100 X 100 mega magic square. 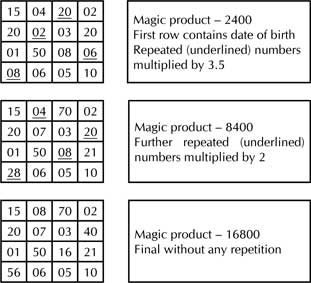 Magic squares offer a high degree of creativity apart from teaching arithmetic, instilling interest in numbers and a liking for mathematics, making it an easy subject to assimilate.

Constructing an even magic square

Even magic squares can be constructed using two important identities, which I will illustrate using the Sri Rama Chakra as an example.

Since there are many ways of choosing numbers to satisfy an identity, many variations of a magic square with the same magic sum are possible. However, it takes a lot of effort and many trials to get a magic square without repetition of numbers.

The author (born in 1934) is a mechanical engineer who retired in 1992 after a career with MICO Bengaluru. After retirement he developed an interest in mathematics and created many magic squares with new concepts. He has conducted math exhibitions and workshops for training students and teachers. For his work in mathematics, the Ramanujam Museum and Math Education Centre honored him in 2001 & 2019. He has a Facebook page Mathemagic Squares. He is available on WhatsApp, 9444901330. He can also be reached at sheelnand25@gmail.com.