It was the first day for the new Class XII in a boys’ school. As schools go, this one was, is, ‘respectable’, and the youngsters are by and large a happy lot. Their X and XII results are usually very creditable, though I think that obesity is reminding the whole staff that more attention needs to be given to physical activity. So, I am sketching a middle-class school, this one happens to be, in West Bengal.

I invited the students – there were about 50 present – to discuss and then tell everyone present about their dreams for the future, now only one big exam away. I had told them, when they asked for guidance, of a pair of young female teachers in one of my courses who thought first it was laughable to suggest that their dream was to walk one day on the moon. I had asked them, what would be the first step towards fulfilling that dream. In some surprise they had agreed that maybe writing to NASA would be a start. And that had set all the people at that course thinking that maybe dreams were not so ridiculous after all. 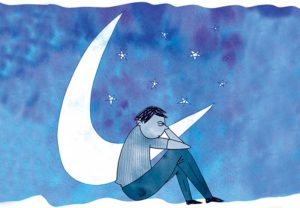 The boys talked. Then, after a while I invited them to share their dreams. One dreamed, he said, of becoming very rich so that he could sit back and do nothing in his mansion. Another wanted to tour the South Pole. Something there. Another wanted to win more computer games. One said he wanted to leave school there and then, and do something adventurous. I promptly put out my hand and shook his and said, “Great. Off you go lad. Others have done just that before you. God bless.” As he returned to his seat, I said, “You wanted to leave here and now. What happened?” There was no reply. Most had no dream at all. And although the lesson had started with an exploration of what it meant in real life to have courage, put to the test, there was very little on view.

But what disturbed me more was that none of these 50 odd 18-year-old boys had any dream, any suggestion of being socially involved towards improving anything for anyone else in the world, the country, or the city.

In general, I have discovered that no matter what the slogans proclaim, most of our youngsters – and oldsters too – are not proud to be who they are, doing what they are doing. One of the boys said his dream was to live in England. Nobody indicated surprise or any other emotion. This has really upset me as an educator. I rail against the system, of course, but so does everybody – in just about every country, in fact. We keep hearing about Finland as a model in education – without hearing about the vast facilities they have available to them. Our problem in India is deeper, and the depth is in the system itself. It does nothing to make the kids proud, except of their percentages which, they soon learn, are pretty bloodless trophies. And so they go on the over-beaten track to college, job, marriage, kids, and the circle begins yet again.

We have little or no inspiration in our syllabi, nor training in how to deploy such ideas. We are training a nation of nobodies to do nothing significant, and persuading them that this is what life is all about. Exceptions are few, and encouragement hardly noticeable. In my organization we have made lots of efforts, but as soon as a light appears at the end of this tunnel, someone reminds the class that it’s all about marks, and that that’s why their parents send them to school. Guess where the parents learned that!

The author is an educationist in India for more than half a century. He can be reached at macbren82@gmail.com.