There are many reasons for reading Ethnographies of Schooling in Contemporary India edited by Meenakshi Thapan.

This book is not the usual quantitative study of issues of access, drop-outs, gender disparities, literacy figures or pass percentages of schools and/or children from different backgrounds and gender that are common fare of most books about schools. This book provides a much needed qualitative account of the variety of schools in India. The research team attempts to capture the daily lived experience of the children studying in different kinds of schools across India. Ethnographies of Schooling in Contemporary India tries to give a flavour of the spectrum of schools – private as well as state-run, schools for children from under-privileged, middle class, and privileged backgrounds. Care has been taken to include a Muslim minority institution, a Christian minority institution, and a Hindu school among others. Anyone interested in understanding what happens within different schools and the unevenness of the experiences across schools in India will find this book useful.

Most of us realize that there is much more going on in schools other than the curricular transactions, yet most of the formal studies have tended to focus almost exclusively upon classroom transactions between the teacher and the student. In another departure from the norm, these researchers don’t just acknowledge the fact of the agency of the students but attempt to examine what the students accept, rebel against, and the culture that they create for themselves. It studies peer culture, which we know is as important a part of the school experience as the teacher-student interaction. In this study, the authors focus upon the different participants engaged as active creators of the school experience. 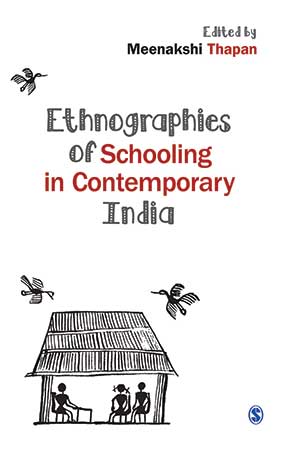 Realizing that it is difficult to get past ‘politically’ correct answers that children often give adults, the researchers of Ethnographies of Schooling in Contemporary India take pains to get past that hurdle by asking about issues in a way that children state their opinions frankly. The researchers then proceed to study the peer culture and gender roles reconstruction before moving on to other issues like citizenship training, caring for the environment, religious identity and culture where the connections and gaps between what is taught and imbibed are more evident.

Ethnographies sincerely attempts to provide a thick description of what happens in schools by capturing the details and the distinctive ambiance of the schools studied. Care is taken to go beyond a simplistic representation by looking at the school from the context of the school’s history and goals, the different participants of the school and the effect of social, political, and cultural forces to capture the complexity of the school experience. As the editor, Meenakshi Thapan, puts it, “As compared to earlier perspectives that approached meaning-making from a more person-centred symbolic interactionist approach that underplayed agency, such a view asserts meaning-making is a far more fraught and complex process. We, therefore, need to pay attention to the social, political, and cultural forces as they shape school experience in different social contexts while simultaneously enabling agency of students and teachers to remain at the forefront of our analysis.”

Though recently there has been a spurt of good books about education, there have not been enough sociological studies on schooling. This book too laments that sociologists have not paid enough attention to the process of schooling and experiences of schooling. Long before the end of the book, the authors succeed in persuading us that education is indeed a rich terrain for sociologists to mine. They do so not only by the very interesting material that they have captured but also by the methodological rigour and competence that as sociologists they bring to the subject matter. Ethnographies is a competent study that makes a compelling point about the need for more sociological studies of education.

The choice of the ethnographic method adds to the value of the book as it is an appropriate tool for picking up on the finer nuances and details of the subject being explored since it goes beyond the mere recording of data. How the ethnographic method can be used effectively is demonstrated in the course of the book and young researchers will find much to learn and emulate from this book.

In the last chapter, personal autobiographical narratives of the researchers are recorded to bring in a different dimension to the evidence regarding a lived school experience. This attempt to articulate what the schooling experience means in retrospect is very interesting and valuable as perspectives change.

This book is not just for sociologists or students of sociology of education as the preceding account might suggest. It has several features not found in most books examining schools especially in the Indian context.

As schooling becomes an inevitable experience for most children, one hopes that Ethnographies of Schooling in Contemporary India will be read by policy makers, principals, school teachers, and parents – apart from students of sociology of education to understand the variety and complexity of the school experience.

One fear is that the academic language and rigour that contribute to making this book worthwhile might make it less accessible for the more general reader. Another danger is that it fails to capture any of the truly appalling schools that also exist and may thus tend to give a sanitized picture of schooling.

The author has been working in the field of education for over 30 years. She has been involved with school teaching, teacher-education, and curriculum development (at institutional and national levels). She is based at an alternative education centre, Centre for Learning, Secunderabad, which she co-founded. She can be reached at kaur.gurveen@gmail.com.

Interested in the book?
Buy Ethnographies of Schooling in Contemporary India from popular online stores amazon.in and flipkart. It is also available on Infibeam (another online store). You could also visit the SAGE website, given below, to place your orders: