A handful of learning moments from one teacher’s grab bag

Students make the best teachers. They’re the masters of modeling as they navigate in real time the challenges of growing and becoming. After 14 years in the classroom, I’ve “taught” about 1,000 students, or better said I’ve learned from about 1,000 young teachers. It’s hard to conjure up all of those valuable life lessons over the years, but many remain in the spotlight, written on the walls of my mental classroom in permanent marker. 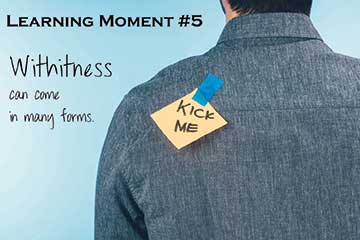 Learning moment #5
I began my career as a high school English teacher. I was only six years older than some of my students, so I considered myself a hip new teacher who still knew all the tricks. I knew what was going on. I had what we called withitness.

One day I caught a boy sticking a post-it note onto the back of another student during class. Yep, I had withitness. Caught him. But when I went to remove the post-it, I discovered a collection of little paper squares clinging to the backs of half the students in class, each with a different I-statement that probably didn’t actually represent the true values or beliefs of those who wore them. I caught the kid, yes, but not before he had already tagged a good dozen students.

I removed the post-its and promptly placed the confiscated pack safely inside my desk drawer. The boy’s rising anger was physically noticeable as he huffed and puffed louder and faster until he suddenly burst from his chair and ran to my desk. Before I knew what was going on he tore open all of my desk drawers and threw all contents across the room. Students covered their faces as my rulers, pens, pencils and staples sailed past their heads.

When my drawers were empty, the boy picked his pack of post-its up off the ground and marched over to me.

“These are mine!” he screamed into my face and swiftly ran out of the classroom.

A moment of silence passed as the rest of us processed what had just happened. I scanned over all my things strewn across the floor, and then up at the students. Thirty pairs of eyes blinked back at me, waiting for me to say something.

“Has anyone seen my car keys?” I finally said.

For some reason I received laughter and a small applause, and then some students got up to help pick up the mess. I supposed many were grateful to have dodged the potential embarrassment from the post-its I’d removed. I didn’t begin that class with the withitness I thought I had, but it seemed I ended it with a bit. 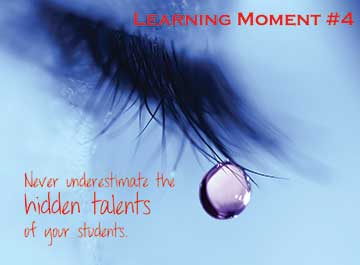 Learning moment #4
I’ve enjoyed a career as a jokey teacher. I can’t get through a lesson without a few one-liners or pranks, like stringing dozens of meters of yarn across the room until it was a web of thread that students had to climb through to get to their seats. It keeps the kids on their feet.

“We’re gonna get you one day Mr. B!” they’d always say. But this was impossible. I was always on my feet (and I had withitness, remember).

Dana was an exceptionally happy girl, always laughing, chatting, prancing around the room. One morning she wasn’t herself, though. She sat quietly with her head down as I continued a lesson on the fifth act of Romeo and Juliet. When another student volunteered to continue reading the play out loud, Dana waved me over and quietly asked if she could talk to me in the hallway.

Outside the room, Dana sat down on the floor and asked me to close the door. She then proceeded to pour her heart out, delivering this epic saga involving every aspect of her life. Her boyfriend dumped her, her best friend took his side, her dog was sick, she missed her dad who lived in New York, she was failing math, and her forehead was breaking out in acne.

As I listened, I offered advice where I could, sharing some of my own intimate battle stories with break-ups and break-outs. We must have been out in the hallway for 15 minutes before I thought of interrupting Dana’s sobbing to check on the rest of the kids in class.

What I found was a flipped classroom: all the desks and chairs were upside down; all posters on the walls had been rotated 180 degrees; even my coffee thermos stood on its head, one brown tear dripping down the side. What 30 students cooperating can accomplish in 15 minutes….

When I turned back to Dana, I found her standing upright, arms crossed, laughing. “Got ya”, she said and pranced back into the classroom.

Make that what 31 students cooperating can accomplish. We continued the rest of the lesson sitting on the floor, everyone proud and giddy. Somehow the tragedy of the fifth act of Romeo and Juliet didn’t quite hit home for the kids that day. 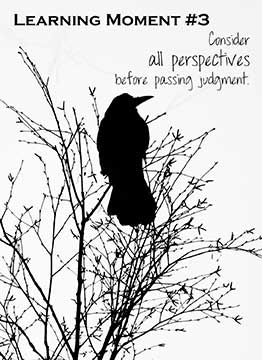 Learning moment #3
My first classroom was in a high school built on the edge of the Everglades in south Florida, so nature pleasantly surrounded us. The campus echoed with the songs of tree frogs. Green parrots chattered away on the buildings. We even had to remove an alligator from the football field one morning.

I was in the middle of a grammar lesson when a student suddenly screamed. I turned around and found her climbing up on her chair, frantically trying to escape from a small gecko that had come in through the window.

For the size of the little critter, it stirred up a considerable disruption as it scurried beneath desks, trying to avoid the hazardous sandals and sneakers that frequented these parts. I confidently approached the gecko, expecting to put an end to the show immediately so we could return to the much more exciting world of participial phrases.

But what ensued was a good half-hour engagement with the reptile: teacher vs. gecko. I was on my hands and knees, beneath desks, over desks, running, stalking. Kids were cheering, some for me, some for the gecko. By the time I finally got my hand on the little guy, I was wet with sweat, the classroom in disarray.

Sensing the return to grammar now that the show was over, all students suddenly found the gecko cute and wanted to see him up close. The reptile made its rounds, and then I set him outside on the window sill. Not two seconds later, a big black bird flew right up, landed on the sill while I was still standing there, grabbed the gecko in its beak, and flew away.

A mixture of laughter and expressions of despair immediately followed this shocking moment, which led into a discussion about roles in the animal kingdom, the food chain, and mankind’s influence on all of this. If I hadn’t intervened, the gecko would still be alive, some accused. But everything has to eat, others argued; I actually saved the bird’s life. 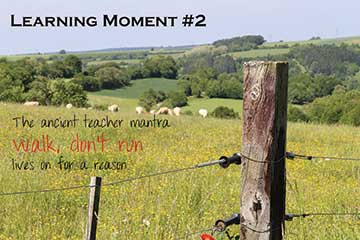 Learning moment #2
There’s a lovely summer camp in Switzerland where I accompanied a few fifth grade classes over the years as a goodbye hurrah before summer vacation.

Although the camp counsellors do an excellent job keeping children safe, activities such as dog sledding or mountain biking are so exciting that they aren’t without their risks. Kids need to be aware of their surroundings at all times.

On a hike up the French Swiss Alps, the counsellors guided us across streams, through densely populated cow pastures, and over large rock piles. At one point the trail edged along what felt like a 70 degree grassy slope on the mountain, where long green grasses cascaded down the side like leafy waterfalls, and just as slippery.

I walked at the back of the group, with Josh the last student in front of me. When he noticed how far behind he and I were, he suddenly started to run down the path.

“Walk, don’t run!” I called after him, and then Josh tripped and took a step off the dirt trail, where he slipped on the grass and slid down the hill on his butt, feet facing forward. Luckily he only slid down a few meters.

Unfortunately what stopped him was a wooden fence post which met Josh abruptly and firmly between his legs. Josh sat straddling the post, moaning and sort of laughing.

As I made my way down to him, Josh tried to get back to his feet by pulling up on the fence. Unfortunately it was one of the many electric fences that meandered across the hillsides to keep the cows from wandering. Moaning laughter swiftly changed to a sharp scream as Josh let go of the fence and fell back onto his bottom.

But Josh didn’t seem to register what had happened and grabbed the fence again to pull himself up, which of course shocked him again and he dropped back down. This actually happened two more times before Josh gave up and just sat there. When I reached him he had tears in his eyes, but he was laughing. A little scared, but not really hurt. A good sport.

We kept the story between the two of us and laughed for a good while. We took our time catching up with the group again… walking, not running. 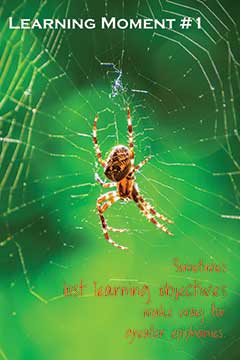 Learning moment #1
On a field trip to a museum with a third grade class, we had our lunch on the concrete steps outside the building. I was sitting next to Matthew, who chatted to me about his favourite part of the museum.

Instinctively I said, “Don’t eat food off the ground Matthew.”

“Why not?” he challenged.

“Because it’s dirty. I mean, what if a spider peed right there where your pretzel landed, and now you put it in your mouth?”

Matthew’s facial expression warped from mild opposition to absolute bewilderment, as if his whole world had been turned upside down.

With his mouth still full and still chewing, he shrieked, “Spiders PEE!!!?”

It was evident that his view of the natural world had been changed forever. Over the rest of the school year I caught Matthew eating off the floor again, but the boy did remember that arachnids are capable of micturition. That was a revelation he often brought up when reflecting on our trip to the museum.

I want to thank all of my brilliant students whom I’ve had the pleasure to teach over the years, and who have taught me so much more than they might realize. May your withitness always be sharp, your talents never underestimated, your judgments unbiased, your feet on solid ground, and your daily experiences riddled with epiphanies.

The author holds a master’s degree in multicultural education and has worked in the classroom for 14 years. He currently teaches and works for the marketing department at Strothoff International School in Germany, in addition to running the publishing company, Liv & Blue Publishing, LLC. He can be reached at [email protected].