Asking questions, I had always believed, was the best way to learn and I was positive this would work for my son too. I encouraged his questions since they proved that my son was learning. What more could a parent ask for? Well, sometimes you get far more than you ask for! In my case, I was gifted the pleasure of answering questions by the bushel. As my son grew older, the questions grew too. From answering innocuous queries like “Why do I have to go to school?” I moved to answering questions of a denser, moral nature. Any mention of a new name sparked off the question, “Is he good? Or is he bad?” How could I slot people – whether from real life, mythology, or television – into the good and the bad? So I hemmed and hawed and tried to explain that people did not always fall into easily identifiable slots. My son reacted with amazement mixed with disbelief. He couldn’t understand why it was so difficult to simply state if someone was good or bad. As the questions escalated, placing me under a severe moral strain, there were times when I nearly cracked. These were the times when the temptation to answer, “Because I say so!” was strong. But that would have meant taking the easy way out. How often had I watched parents seal the fate of a discussion with those simple words? And how often had I decided that that wasn’t going to be my way of dealing with things? Those memories taunted me now and so I was careful to explain things as patiently as I could. This stage soon passed, leaving me shaken in my own beliefs. I often found myself wondering about the ‘goodness’ and ‘badness’ of people. 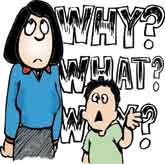 What followed was worse. I now faced questions about the moral integrity of my son’s toys. Was the small Transformer toy the right choice for a hero? Was he, in short, capable of performing the amazing deeds that a hero was expected to? I took the coward’s way out of this; actively encouraging him to buy large Transformers, all eminently capable of shouldering the responsibilities of a hero. When this didn’t work, I chose a path that was fast becoming familiar to me – the coward’s – and helped my son elevate the moral status of the evil Transformers, christening them afresh and introducing them into the ranks of the good guys. Since the coward’s way, in addition to saving a lot of heartache, also came equipped with arguments that sounded good, I was able to reassure myself that I was not straying from my decision to encourage questions. I thought I had faced all the possible pitfalls connected to questions. And I was wrong!

The new set of questions was very simple. “Now?” was a favourite one. So was “Why?” Oh, and let’s not forget “Why me?” All of these emerged whenever I made a suggestion about how my son could help me by doing some chore. And this time, having decided that enough was enough, I pulled out my, “Because I say so!” line. It wasn’t as effective as I had thought. There were always a few more questions, some attempts to reach a compromise, before the work was done. But yes, the work did get done.

Does that mean that adopting this line at the beginning would have been easier? It probably would have. But neither parenting nor teaching is about taking the easy way out. They are, or should be, about nurturing the child. And, if along the path of nurturing the child, the parent manages to pick up a few lessons, what better way for both parent and child to grow? In this case the learning came in the form of the realization that there are no final frontiers for whys and whats! That the parental limits to questions are always expanding. And the questions keep parents on their toes. Yes, answering my son’s questions with the line that denotes parental authority would certainly have been easy. But then, it would have deprived us of the opportunities to learn. And it certainly would have made for a dull growing-up – for both of us.

The author is a Hyderabad-based award-winning author of, most recently, The Haunted School and Other Stories and The House of Fourteen Cat (2011) besides retellings and non-fiction. She can be reached at nayarnandini@gmail.com.