Knowledge shared is knowledge gained. To borrow a quote from Shakespeare such knowledge is ‘twice blessed’. “It blesses him that gives and him that takes.” The following paragraphs describe such an experience.

Sayali Dubhash, a young mother, pursuing her Bachelor’s Degree in e-Education, was touched by the girls who attend a Zilla Parishad School close to her home. Most of them come from economically disadvantaged families. Established in the year 1982, the Zilla Parishad School currently has 437 girl students and 14 teachers. The school has 17 rooms, some in a new building constructed in 2008, under the “Sarva Shiksha Abhiyan”. Incentives like a daily allowance for attending school regularly, free textbooks and workbooks and the Savitribai Phule Scholarship for needy girls have succeeded in reducing the dropout rates in this school. The girls have plenty of potential. Sayali wanted to do something for them so that they could savour the fruits of educational technology and actualize it to the best of their potential.

She took upon herself the mission of setting up a computer laboratory in the school. After garnering information on what facilities existed within the norms set by the administrative bodies, she set up a laboratory with six computers. Thus, on one cool winter day in Pune, on the 17th of November 2009, the girls of the school shed their inhibitions and had their first interaction with computers. Within a few days, they were familiar with the parts of a computer. Sayali gave a few hours each day to teach the girls. Within a few days, the girls were empowered to make their first group presentation. Rukmini Wagh, a class VII student says, “I enjoyed working on the computer. I want to learn to speak English like Sayali Didi and also become a good person in life.” Lakshmi and her team proudly posed with their charts as they made their first group presentation on the parts of a computer. Heena gave a demonstration to the teachers and after expressing her happiness shyly added, “I want to study further”. The reaction of the girls brings to mind Sir Winston Churchill’s words…. “By receiving something we make a living, by giving something, we make a life.” 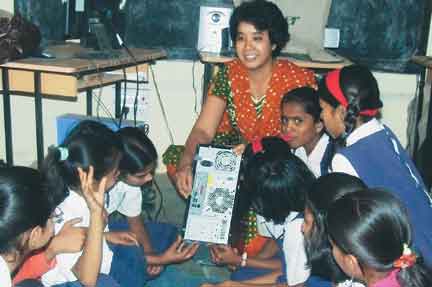 Sayali’s passion knows no bounds. She got in touch with organizations and people who worked with digital resources. The CEO of Greyolltwit – a firm producing educational softwares – after learning about the project, offered a free one-license membership to use their products. Jim Rule, a learning resource designer, was kind enough to donate two CDs he created for an ongoing project. Dr Goje of VIITINDIA, Baramati willingly sent the textbooks they created for their “Hasat Khelat Sanganak Project”.

“Ask and you shall receive” was something that Sayali believed in!

Interaction between this writer and Sayali added a new dimension to this project. The writer, a teacher-educator for the last 15 years, is involved with resource material production for computer-aided learning. She made some presentations and lessons at this school, bearing in mind the background of the girls. Most of these were presentations on English grammar, with self evaluation exercises built in. The girls have a limited vocabulary of English and hence vocabulary building was an important objective. This was facilitated through simple stories, graphics, and animations. The impact of these resources was that the girls learnt amidst an atmosphere of involvement and activity. Values were integrated into all presentations.

Says Sayali, “The education of underprivileged girls is so often among society’s lowest priorities. Parents consider this as loss of income with zero utility. Technology based skills will help these girls be productive members of home and society, thus giving them their long overdue, rightful place in the family.”

Sayali’s efforts were not without their share of challenges. For example, the six computers were not enough to give all students sufficient practice. Once a student got the machine, she was reluctant to move so that another student could work on the machine. Sayali used co-operative learning to overcome this obstacle. She divided the class into groups and it was the responsibility of the group to ensure that all members of the group picked the expected skills. Group morale helped overcome vested interests and time-sharing was facilitated. The girls spent their time learning new things rather than just using the computer for games and colouring activities. They say they want to teach their mothers as well and so would rather spend time learning than simply using the computer for entertainment and leisure.

Motivated by the interest sparked among the students, Vice Principal, Kisan Kutal, feels the need to “spread the idea to other ZP schools”. “What is this idea?” one may ask. This idea is one aspect of public private partnership in education.

In developing countries like India, the onus of development lies mainly with the government, which in turn faces the predicament of multiple demands and limited resources. This leads to a situation where even fundamental objectives such as basic literacy for all are not met. On the other hand, there exists a vibrant private sector, which has resources and the desire to undertake socially responsible activities. This sector is also coming up with innovative approaches to overcome barriers to education and is reaching out to the have-nots. Such a private sector can help by moulding human resources to meet the demands of the future. One aspect of public-private partnership would be to find sponsors for our schools. Private companies can assist with finances, training of staff or by providing non human resources such as furniture, computers and the like. This sort of partnership will help individuals progress. After all we are all angels with one wing; it is only when we cling to one another that we can truly fly.

The author is a lecturer in Pushpanjali College of Education, Vasai, Maharashtra. She can be reached at [email protected].