The idea of a ‘new normal’ has been rife during the lockdown. Looking at the children and teachers during this situation however one is puzzled about the newness of the normal. And a question that haunts us is, what is normal about the so called new? This is so emphatic when it comes to the teaching-learning conducted by various schools. Unfortunately, the crisis has only unmasked the deep-rooted problems of pedagogy, the objectives of teaching and learning and the purpose of schooling. Everyone seems foxed about the coveted benchmark – the idea of contextual learning and nurturing independent learners. More tragic is the fact that educational institutions refuse to reflect on the anomalies even in these tenuous times. Irony unfolds with hilarity to show that we refuse to learn from such crises. The practice of teachers zooming in on the possibility of virtual classrooms under the compulsions and conditions created by the administration is indeed a telling tale. If before lockdown teachers were reduced to clerical staff, now they are supposed to be efficient technocrats. There is not much difference between a teaching-clerk and teaching-techno manager. They had to do so as their employers want them to be at work, no matter the situation. Teachers, in this regard, are no different from other professionals, say software engineers or content developers. Lockdown or unlocked existence, they are asked to do the same things they do in normal situations. The institutions of learning did not want to forego their role as a service provider and the ever impatient parents longed for a continuation of the service too. After all, the only consideration parents have is that they should get the service they are paying for; just like, they expect pizza delivery in record time. A great opportunity for rethinking teaching and learning was lost in this technical relation of service providers and clients, or between teachers and employers, or between teachers and taught. 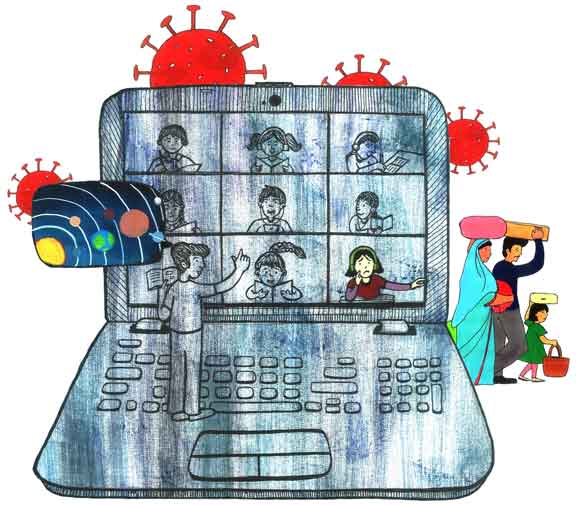 In the beginning, parents and children enjoyed the intrigue! Teachers were gung ho about conducting classes on some of those handy online meeting services, or so it seemed. Saddled with domestic chores in the absence of house helps and a perpetual work-from-home situation, parents found such engagements for their children useful. If parents were working from home, why should the teachers not do the same? It has been parental practice to keep-the-child engaged! And hence, they expect teachers to do the needful. During vacations too, we see children enrolled in formal classes to learn various skills. Never leave a child with any time to do some independent thinking, mulling, imagining and doing things spontaneously – a common concern of schools as well as parents. And to ensure that the child is not wasting time, examine-evaluate-adjudge endlessly. Some such anti-independent learning notions guided the engagement between children and teachers during the lockdown too. The virtual engagement between the teacher and taught began to fall apart as the children reached the limit of curiosity and teachers faced the problems of managing virtual classes. Many teachers experienced hurdles in conducting these classes, as they kept requesting parents to supervise children, keep the younger ones from popping up in front of the camera and regulate the fiddling that youngsters do when they have free hands on the computer. Consequently, the number of homework assignments increased and the sublime metamorphosed into the grotesque, so to say. There was hardly any difference in the assignments students got from the teachers during the usual routine days. The idea was the same old practice, keep the children occupied. The same old apprehension prevailed – managing time well so that it is not wasted, controlling children properly so that they don’t turn unruly and bombarding them with assignments so that the children remained disciplined through the lockdown. Homes became virtual schools and the ever ill-oriented, unreflective parents stepped in on behalf of the schools and teachers.

Teachers started making frantic phone calls to friends they thought could give useful advice on how to develop ‘creative’ assignments to occupy older children. The school administration demanded from each teacher a work plan to show how innovatively he/she plans to engage with the students during this time. Innovation, otherwise an innocent and interesting word, became a serious challenge. Some teachers thought of asking students to watch a set of films and write about nature and culture, virus and humans, or evolution of humans and the risk of living. But this was not sufficient. The administration cannot nod affirmatively to such strangely romantic pedagogy that gives so much freedom to students. They solicited more fortified and leak-proof lesson plans, very clearly making promises about possible delivery. In many cases, the more innovatively an idea was planned, the less innovative it became. After all schools have to be answerable to their clients, the buyers of their services. Hence, every plan must show that the teachers are not taking their task lightly. Even though a teacher was teaching social sciences, it seemed to be beyond imagination to ask students to read about the plight of migrant workers during lockdown. A teacher thought of asking students to talk to parents and accessible neighbours about the relationship between clapping and banging on utensils and the spread of the virus. It was immediately shot down by the vice-principal of the school. Some of the students of political science at a school decided to do a collection of news reports about poor governance and nationalist vigilantism of residents’ welfare associations. The teacher had to request students to abort such a plan. None of the students of civics, sociology, history, political science, and even biology and chemistry were encouraged to explore whether distancing should be physical or social in order to avoid the spread of the virus. No administration is comfortable with such issues even though they stare in our faces. And zooming in and out of virtual classes, many students wondered as to why the new kind of social untouchability based on Covid-19 was not an issue of discussion at all. Even though everyone in the metro cities faced inconvenience from the absence of domestic helps, it did not trigger a debate on the importance of migrant workers or casual labourers in our everyday life. And the instances that it did were few and far between, it hardly made a difference in the way pedagogy unfolds in the process of teaching and learning.

This was not normal and there is nothing new about this idea of normal, as far as pedagogic practices and vision of schooling are concerned. For, to turn a new leaf, one ought to be able to comprehend the old, limitations of the old, and then seek for new!

The author who has written various books, teaches sociology at South Asian University in Delhi and engages with issues in education. He can be reached at dev@soc.sau.ac.in.