The one question a growing school student will often wrestle with is, “Who am I?”

And the answer to that will come from his teen years primarily. It is an awkward, confusing and intense stage of life, a simmering limbo of sorts, the teen hangs between crucial developmental milestones. There are pulls and pushes, fundamental conflicts of interests and perceived pressures. Even though the parents are most invested, their voices begin to dim at this time as those of the friends and thought leaders and mere acquaintances take over. It stands to reason that autonomy and personal agency, considered the hallmark of adulting, will be pursued at this age with a fierce gusto.

It has always been so, in most ways. The hormones are the same, so is the acne. The voices still break, the menstruation shows up and there is the body odour. Oh, for that oily hair and the new art of shaving. But there is one crucial difference today, something no teen of yesteryear has experienced. 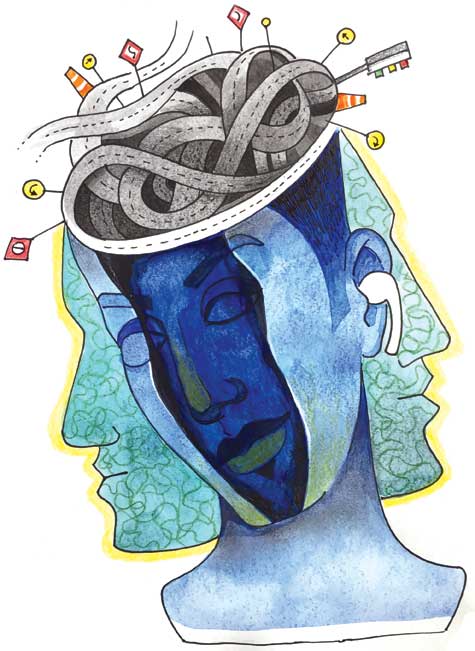 There is an unimaginable clamour in the teen mind of 2020. An incessant noise. The young brain is like an expressway. There is a breakneck traffic inside, zipping in different directions, the drivers are parents, friends, coaches, Instagram, school teachers, the significant other, the YouTube, even the therapist. In contrast, recall what it was like growing up in the 80s. There was either the Ambassador or the Fiat! There were the voices of the parents or the teachers, the rest either did not exist or had very little access to the thoughts and emotions of the growing young.

The teen of yesterday had less confusion about his or her identity, there weren’t that many choices. The teens today juggle several faces. They present different personas to the multitude influences in their lives. They are the photogenic, fun, breezy, awesome young beings on Instagram. At home, they present conformity, preoccupation with school work and a generic normality. To their sports coaches, they are tough as nails and driven. With friends, there is thoughtfulness and a ready ear for any of their problems. There are also cliques the teens flirt with. The popular group, the pensive empath group, the Goth group. Every subculture demands a certain presentation from the vulnerable young member.

The nature of identity has clearly changed for this generation. Where in all this highway traffic is the real teenager? That is their struggle. Who is the actual person below the several levels of constructed personalities? What does the teenager feel like deep down inside? Dark and moody? Kind and loving to herself/himself or just fatigued at all the phony and plastic identities they wear for the world?

This is the time for creating their true identities, free of the cacophony around them. It is expected that they will use the tools of their times to prepare to play a productive role in the economy and society of the future. But there are silos. Teenagers today are never truly free from anxiety. They are never truly free to hear themselves think. They are never ever off the grid of expectations and comparisons and judgments. Whether they are on the phone, at school, in a gathering, doing their school work or even with family, there is the hum in the head, always on. Managing their personal identity expressway takes a lot out of them.

To avoid uncomfortable emotions, many teens listen to music on their favourite streaming platform or watch reruns of their favourite serials or numb themselves with substances. Not being able to decide who they are and the roles they want to play in the world may feel like a failure to some teens. It then becomes easier to hide under other multiple identities. And so, the young flit from time on phone to time with family, both instances being anxiety provoking.

The first thing for a parent or teacher is to understand what is going on here. A teen’s brain is not cognitively developed yet, therefore the impulsiveness in their behaviour. There is a struggle to feel unique as well as to fit in at the same time. Perhaps they feel left out or ignored because of their ethnic, gender or sexual identity. It could be that there is a lack of attachment to the parents or an absence of adult influence. Perhaps the teen does not feel accepted in a positive group of peers.

The resultant behaviour could include an unrealistic perception of oneself or promiscuous behaviour or dramatic conduct or self-recrimination. There may be intense feelings of anger or sadness. Disregarding rules and limits and boundaries, glancing around to monitor others could all be signs of a struggle to form an identity.

Now how does a parent help with all this traffic their teen is trying to negotiate? By not adding their own voice. By letting the teen hear more of his or her own voice. By staying curious. By asking open questions. By being the quiet and calm parking space into which the teens can pull up and consider themselves. By not starting to remind them of their strengths! By not trying to make them feel better! By just gentle asking and a whole lot of listening. The teens already have all the answers. Perhaps they feel lonely. Perhaps they don’t value themselves all that much. Perhaps they will look at your pet dog and say, “I want that life!”

The calm, confident and safe holding space adults can provide the young today is the best thing to do. It can ease and cure and soothe frayed nerves, it is invaluable and essential for their well-being. Be quiet adults. Respect the angst the young wrestle with. There is very little point telling them what it used to be or can be. They have known nothing else other than what they live with. So, stick around and be useful while they work it out themselves with your coolness for company.

The trick is to let them go when you have the strongest urge to protect them the most.

The author is a former teacher/journalist, published author and professional speaker on generational empathy with a background and training in media, having worked in advertising, public relations, documentary film making and feature journalism. She can be reached at [email protected] and https://neerjasingh.com.