Project Gift Compassion, initiated by Adhya Educational Society, is an empathy project that brings schools across the city of Hyderabad, India on a single platform. The project aims “to overcome the social barriers existing in the society and to facilitate the idea of sharing and the act of giving” among young and impressionable minds.

“Gift Compassion” is designed to engage schools (both in the public and private domains), teachers, children, and parents in the creation of a gift economy that traverses barriers of caste, creed, gender, socio-economic status, etc. An exchange of a small gift prepared by a child from one strata of the society with another from a different community and background builds a bridge of compassion, hope, and trust for each other. In principle, voluntary and recurring gift exchange both create and circulate compassion, empathy, social consciousness, and build a community. 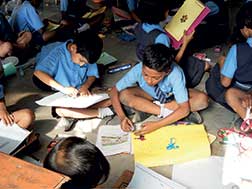 All the participating schools were teamed up with a buddy school where the children from the respective schools made a gift (of their own choice). Gifts made by children ranged from Origami (art of paper folding), recycled gifts from plastic bottles, hand stitched folders, handmade books, greeting cards, drawings and crafts. The children of a government zilla parishad school in Mahboobnagar grew fruits for their counterparts! Each pair of schools was asked to visit the other and exchange the gifts made by the children on any day during the Joy of Giving Week, 2012 (October 2nd – October 8th). Empathy project, Gift Compassion was implemented across 40 schools reaching 10,000 children, involving schools and children from every corner of Hyderabad including the most sensitive areas in the Old City with a focus on building bridges among schools and communities. It has been a fantastic journey!

For successful execution, the project was implemented in three phases with each phase having its own significance; during phase one, the ideas behind the Joy of Giving Week and Gift Compassion Project were introduced to the management, children, and parents of the participating schools and this was followed up with gift making by children. About 20-25 children from each school took all the gifts made by children of their school and visited their buddy school and exchanged gifts. The group of visiting children went from class to class and spoke about themselves, asked questions, made friends and found out about the hosts. The exchange did not just include an object but instead was an exchange of ideas, stories, and awareness about multiple dimensions of life.

The children from a zilla parishad goverment high school in Hyderabad made paper cranes in boxes and went to an affluent school and told the story about a girl named Sadako from Hiroshima, Japan and how she set out to make 1000 paper cranes to cure herself of cancer. They wove human history into the tapestry of joy, giving and hope for everyone involved. A child from zilla parishad school who gifted a crane describes his experience with Gift Compassion as an ‘exciting’ and a ‘confidence’ building measure because he was surprised to find out that he could speak English with the affluent children and was able to make new friends. Several other children at a private school in an underserved environment described their gifts as made from waste material. The children in affluent schools who received such recycled gifts were “amazed at the creativity and the use of natural resources” and felt they too were “motivated to do something like that as the value of the gift was immeasurable”. The children from the city were inspired to see the skill and talent with which children in rural areas could make clay pots or weave baskets at such great speed with dexterity. They described their experience in the rural settings as “really a great experience!” 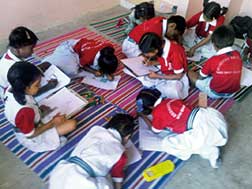 The gift exchange led to the development of an understanding of each others’ lives, socio-cultural backgrounds, aspirations, dreams and hopes. Phase two focused on the reflections by the children, management, and teachers on the gift exchange. The reflection session was held at every participating school on a chosen day and the session lasted for a maximum of four hours. Since the learning philosophy at Adhya is based on Arts Based Learning and Teaching, the reflection sessions also used art as a means of interpretation of the varied experiences that the children underwent during the first phase. After a wonderful experience of awareness, thinking, and learning followed by reflection, children from some of the schools talked about their exciting journey and shared their valuable memories over Bol Hyderabad, a community radio station housed in the University of Hyderabad.

The project had a variety of educational outcomes, with various perspectives of learning emerging from the participants. A student from an affluent private school said, “The interaction was very interesting” and that it was a “memorable and inspiring experience”. Another student from the same school informed us that he discussed about the trip with parents and friends and said that the “trip was informative as he “learned other languages, craft, games and how to communicate with others.”

A student from an affluent private school said that the children from the buddy school (Government and underserved school) were “more disciplined, helpful, creative, and down to earth.” This student also added that “it was an inspiring experience” during which he learned that “sharing is caring”. Another student from the same school said she “interacted with many students, played with them, danced and enjoyed the trip.” One more student said he “got to know about village life, crops, plants and even some grains.” Some students from the affluent school realized how lucky they were to have a lot of luxuries while some students from the government school lacked even the basic necessities. These students have truly learned the joy of giving. A student said, “We should exchange joys and divide the troubles.”

Students from one government school who went to another school said that they “liked the people there, saw a new place, learned how to respect and behave with others, met new people, learned how to be happy and make others smile.” A student from a private and underserved school who visited another private and underserved school said that he would “want to experience more such trips”. 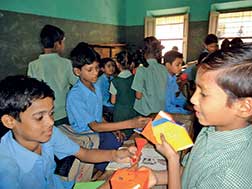 The teachers from the participating schools also reflected on the process of participating in the giving and sharing. One teacher from a government school said, “Our kids were interacting really well with the kids of the other school. They started talking about the gifts and how happy these gifts made them feel. The teachers were also really friendly and told us various things about how their school runs. The kids also loved the other school building and kept talking about how they would like to redesign their own school.”

Another teacher said, “One good thing that happened is my kids realized the importance of giving”. One girl gave up her place for a visit to the science museum and let a classmate go instead; “she has been very happy with the joy of giving.” Most teachers agreed that this exercise had a positive impact on everyone involved as it “was not only an opportunity to interact with other children and build their social etiquette, but also a breather from daily routines at school.”

We have been informed by all the teachers from the participating schools that the children savoured every moment they spent on making the gifts and that children unleashed their creativity in thinking up the gifts. A documentation of the entire project leads us to report that during the exchange of gifts, children mingled with one and another, shared their lunch boxes, made new friends, spoke about their dreams, inspired one another in their own ways and enjoyed “giving” in the true sense.