Heroes are regularly celebrated as special people. They’re different to you and me. We see the fearless and selfless acts of famous heroes throughout history and say, “I could not have done that. What an extraordinary person!”

It’s an interesting self-deception. The truth is that the act of heroism is extraordinary. The person performing it is, more often than not, perfectly ordinary. History is littered with ordinary people doing extraordinary things who are labelled as heroes.

The label itself can also be deceptive. It is often given to the stars of sports and screen, as well as to everyday do-gooders. To properly define the word, hero, is an important part of any conversation. For the purpose of this article, the heroic act must satisfy three conditions.
• It must include an element of risk or sacrifice.
• It needs to be for the good of others without expectation of any personal gain.
• It has to be done willingly and deliberately.

This definition of a heroic act means anyone has the potential to be a hero. These heroes-in-waiting are living in your town, eating at the same restaurants, and sitting in your classroom. However, they’re still rare. There are many psychological and social pressures keeping them from taking action when the time calls for it. The opposite of a hero is not a villain; it’s a bystander.

How do we increase the incidence of heroic acts? The key is to decrease the factors involved in bystander behaviour. By regularly thinking about heroism, discussing heroic acts, and considering situations that call for heroism, ordinary people are more likely to perform heroic acts when called upon.

The classroom is an ideal place for nurturing heroes-in-waiting, as children are more likely to accept the possibilities of everyday heroism (adults think they already know everything). Your students are also confronted with opportunities for heroic action on a regular basis. Heroes in the classroom? Absolutely. Heroes will stand up against teasing, abuse, and discrimination. Heroes will call out apathy and disruptive behaviour. Heroes will prevent vandalism. Your students see injustice on a regular basis.

So, here are four steps to creating heroes in your classroom.

1. Who is a hero?
The first business at hand is to separate the fake heroes from the real deal. The best way I’ve found to do this is simply present a series of famous people for the students to classify as hero or celebrity. You can do this visually with a T-Chart in front of the room. One at a time, read out a name and have the class choose which side of the line they belong on. Don’t set any definitions for either category, simply allow the students to discuss their decisions.

The goal of this step is to get each student thinking about their own “hero” definition and to begin a conversation about what characteristics are important for heroes. The second step will ask them to expand on that conversation.

2. What makes a hero?
What differentiated the heroes from the celebrities? By reviewing the selection process your class should be able to come up with a set of attributes that seem to be required for hero status. You could have the class do it as a whole or split them up into small groups. The groups could then present their set of attributes to the rest of the class. There is ample opportunity to discuss the meanings of the words presented – many will be similar in meaning.

Finish the activity by creating a list of attributes that were agreed upon by the whole group. You can create a poster for the classroom. 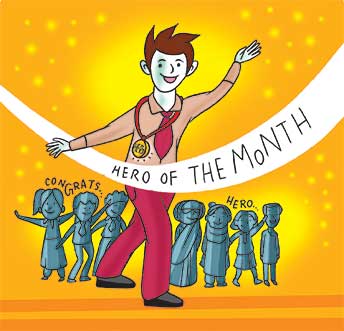 3. How can I be a hero?
Now comes the “ah ha!” moment. By creating a list of attributes, students will have developed a road map to heroism. This is where you can introduce the concept of the heroic act. It is the practice of these attributes that prompt ordinary people to do the extraordinary.

With the full class list handy, have your students choose the attribute (or maybe two) that appeals most to them and think about how to put it into practice. On a piece of paper, students should write the attribute and then three ways they could practice it on a daily basis.

For example, COURAGE: 1– Speak up when I disagree with someone’s opinion, 2– Stand up for someone being called names, 3– Tell a friend to stop behaving badly.

This deliberate behaviour is the kind of thing that develops a heroic habit. However, they’re going to need your help and that’s where step four comes in.

4. How can I keep this up?
The vital piece in the hero training puzzle is consistent revisiting. A heroic habit is developed through regular exposure to heroism and consideration of heroic behaviour and situations. There are myriad ways to accomplish this in your classroom and ultimately you’re going to be the best judge of how to do it.

There are two keys to keeping it current. The first is to use the language the class developed in part two. If you embrace their words and use them to describe their own behaviour as well as acts seen in the public eye, they’re more likely to continue practicing them.

The second is to develop routines. You could allocate a window of time each week for the sharing of heroic acts noticed in the media or in the school. The class could create a hero award that is given out at the end of every week. The award could be restricted to people in the class, or perhaps to people in the community or beyond.

The important thing is to create anticipation and expectation of regular discussions of heroism and its people. It is with this that you will notice heroic actions come to the fore in your classroom.

What next?
With a classroom that is focusing on their actions, using a common vocabulary, and sharing stories of heroes, you will find the following:

When the focus starts to move outside of the classroom, you have a wonderful opportunity. Ask your students if they see problems in the school or outside community that they’d like to fix. What issues speak to them? What can they do? I’ve had groups of students campaign to make the dress code for teachers less restrictive, organize a fundraiser for a foreign country impacted by a natural disaster, create a plan to keep the school more tidy (working in partnership with the school cleaners), and promote the needs of children at a local city council meeting.

What will your class of heroes do?

The author is the founder of the Hero Construction Company and the Hero Round Table. He lives in Australia and travels the world to teach and promote heroism. He can be reached at matt@theheroconstructioncompany.com.