If the Argus-eyed media are to be believed, the Radia tapes have opened up a Pandora’s Box for the coalition government at the Centre. Anybody who is a somebody in Delhi figures in them, and while the general public is supposedly salivating like Pavlov’s dogs for the next instalment of the tapes, reports suggest that many of the voices which feature prominently in the ‘audio show’ are not very keen on the release. Frankly, I don’t know what the fuss is all about. We know that India is steeped in corruption, and the higher you are on the totem pole, the bigger the scam you can pull off – and perhaps more importantly, get away with. Our country stinks, and the smell emanating from it is so foul that not even the mighty Hercules would be willing to take up the challenge of cleansing this Augean stable. I could continue to rant and rave, and growl pessimistic prophecies like some character in a Greek tragedy, but other than increasing my blood pressure, and perhaps that of the reader’s, it will serve no useful purpose. Our time would be better served if I chose to talk about the idioms in the preamble which have their roots in Greek mythology.

The expression ‘Argus-eyed’ is mostly used in English to mean ‘vigilant’ or ‘watchful’. I suppose being vigilant would be the easiest thing to do if the individual came equipped with fifty pairs of eyes on his head. You might say that one must have a pretty enormous head to have fifty pairs of eyes mounted on it. Well, the melon in question was humongous; it was that of a giant named Argus. Apparently Juno, the wife of the King of Gods, thinking that Argus was nothing more than a cowherd asked him to look after her special heifer, Io. Though the giant was more intent on being a cowboy, he did not protest when the Queen commanded him to perform this menial task. When it came to Io, one did not argue with the queen bee, period. The cowherd giant trained all fifty pairs of eyes on Io, and made sure that nothing happened to the animal. (There are rumours that the heifer complained to Juno that she was distinctly uncomfortable having so many eyes on her). The story goes whenever Argus felt sleepy, he slept by closing only one pair of eyes; the other 49 pairs remained focussed on the cow, and this constant feeling of being watched raised blisters on her rather sensitive hide! Everything was hunky dory till the messenger of gods, Mercury, began to take a fancy to Io. Why a god would fancy a bovine is beyond me; but then you know what they say about gods: they are crazy. Mercury realized that the only way to steal the cow was to lull Argus to sleep, and the cunning god achieved this by playing soothing music on his lyre. As soon as the fifty pairs of eyes closed, the bovine-loving god drew his sword, chopped off the giant’s head and sped away with the heifer. When Juno realized what had happened, she picked up the giant’s head, plucked out the eyes one by one, and placed them all on the tail of a peacock. This probably explains why we talk about the eye on a peacock’s feather. 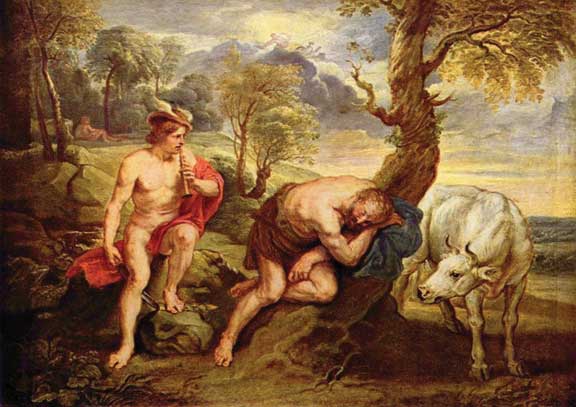 As far as possible, most people avoid using public bathrooms in India. But when the call of nature cannot be wished away, and we are compelled to make a visit, it is the line from Shakespeare’s ‘Macbeth’ that comes to mind as we timidly enter the room where hundreds before us had made their deposit: “All the perfumes of Arabia will not sweeten this hand”. If history is to be believed, the smell emanating from the Augean stables was far worse. The story goes that King Augeas of Elis built several huge stables to house his 3000 strong oxen. The stables were so big that an army of men found it impossible to clean them at regular intervals. After some time, they eventually gave up trying to clean up the mess. They remained unwashed for nearly 30 years, so much so, by the time Hercules paid a visit to the stables, they could be smelt long before they were seen. (They were in worse shape than the stained bathrooms and faeces-stained beds provided by Mr. Kalmadi and his cronies for our foreign ‘athithis’ during the recently concluded Commonwealth games). Hercules was given twelve tasks by Zeus, his father, and was told that if he completed all of them successfully, he would become immortal. One of the ‘labours’ given to the dashing hero was to ‘cleanse the Augean stables’ in a single day. Hercules did not waste his time scooping dung into huge baskets and throwing it outside. Instead, he merely did what a superhero does – used his brain. He went to the nearby river Alpheus, flexed his muscles and diverted the river’s course, so that it ran through the stables. The force of the flowing water cleaned everything in no time – history doesn’t really tell us if the oxen were washed away as well. Hercules’ job was to clean the stables, and he did that!

The one thing that the story behind the two foregoing idioms makes clear is that Greek gods and goddesses were fond of testing individuals. Instead of lending a helping hand, the gods took an impish delight in dropping the occasional banana peel along the already slippery slope the poor protagonist was taking. Despite the constant trials and tribulations that He made Man go through, Zeus, the King of Gods was thoroughly dissatisfied with the product he had created. He decided to teach man a lesson, and for this he created the most formidable weapon he could think of – a woman! He called her…. no, not Niira Radia, but Pandora! The name itself literally means ‘all gifts’ (pan=all; dora=gifts). She was given this name because Zeus ordered all his minions, the lesser gods, to shower this woman with all kinds of gifts which would ultimately bring about the downfall of man. The gifts were put in a beautiful box, and presented to Pandora with a warning never to open it. Now, if someone gave you a gift and asked you never to open it, what would you do? Well, if you were a normal human being, you would tell the giver of the gift to go jump in a lake and proceed to unwrap the present. Pandora did the same; she opened the beautiful box and saw to her horror all the evils of the world escape. Where the spirits went to no one really knew – till now, that is. There are reasons to believe that some have made their way into our Parliament.