When we think of God, the image that we instantly conjure up is that of someone with a halo around his head, a delicious smile spreading across his compassionate face, the nectar of celestial kindness flowing through his veins, words of wisdom and encouragement gushing from his mouth…and so on and so forth. Hold that thought for a moment. An ancient Greek reading this would probably guffaw and respond thus:

“Dream on bro, dream on! You are cuckoo to think that God is all sugar and spice and all things that are nice. Let me tell you, we Greeks know our gods, and there is nothing sweet or nice about those whackos. Those loony tunes are as mean as they come. Don’t believe me? Just ask Prometheus and Tantalus. 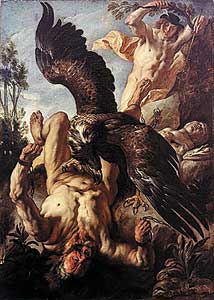 “Never heard of Prometheus, eh? Well, let me fill you in. Now, this dude was a Titan, so he was kind of big made. In my language, ‘Prometheus’ means ‘fourthought’ – or is it spelt ‘forethought’? Who cares! This English language with its crazy spelling is as loony as the gods themselves. Anyway, as I was saying, this big fella Prometheus was floating around in heaven when for no reason at all he develops itchy feet. He picks up sticks and decants himself on earth to see how humans are doing. At that time, they weren’t doing very well coz the head honcho of the gods, Zeus, was making their life a real hell. He had taken fire away from them, so my ancestors were freezing their you- now-what off inside dark caves, eating basically sushi. When it came to eating, Prometheus had the reputation of licking his plate clean, but unlike the cave dwellers on earth, he liked his food well done. He wanted humans to sample cooked food. Now if you and I had been Prometheus, we would have probably ordered take out from one of the restaurants in heaven and given it to the ‘stinkapoos’ in the caves. Instead, the big fella with nothing inside his noodle, went to Mercury and asked: ‘Hey Merc, can you lend me fire?’ ‘What for bro?’ ‘I want to give it to mankind. You see….’ ‘Fire to mankind? Are you nuts? If Zeus comes to know about it, he’d kick me in the …..’ ‘The old blighter will never know. I won’t rat on you.’ ‘That ugly dude has hidden cameras installed everywhere. He sees everything.’

When Prometheus heard this, he hit his head with his mighty hand, and an idea dropped. He decided he was going to stick it to Zeus; he was going to steal fire. Now for someone named ‘forethought’, you might think that this was a pretty dumb thing to do. To cut a long story short, he managed to steal fire and give it to human beings. Soon there was fire raging in every cave, and people were eating cooked food. Camp fire songs became popular; ‘Come on baby, light my fire’ was the first song to climb to the top of the charts. Everything was hunky dory till Zeus got wind of what was happening. He went ballistic when he heard what Prometheus had done. He grabbed hold of the ample specimen and chained him to a rock. He whistled for a humongous eagle from somewhere and ordered it to eat Prometheus’ liver. With the eagle ripping out his insides to get at the liver, Prometheus did what any chained man would – no, he did not pray, he merely screamed. The Titan’s scream deafened the eagle partially in one ear, but it continued with its job, and in a matter of few hours had consumed the giant liver. You would think that would be the end of the story, but the bloodthirsty Zeus wasn’t done yet. He had it in for Prometheus, and was going to make him undergo the mother of all suffering.

‘Listen to me bozo, and listen to me good’, belched Zeus. ‘If you think I’m going to put you out of your misery, think again. You are going to be stinking up this place for eternity. Every day, this giant eagle will visit you, tear up your innards and eat your liver. He will spend the whole day doing it. Come night time, your liver will grow back again, and the next morning the eagle will return again.’

‘Nooooooo!’ The cry came not from the fire stealer, but the eagle. ‘Oh mighty Zeus, you’ve got to be kidding me. There’s no way I can eat this guy’s liver every day for eternity man. I almost puked the first time around. Can I send substitutes?’ 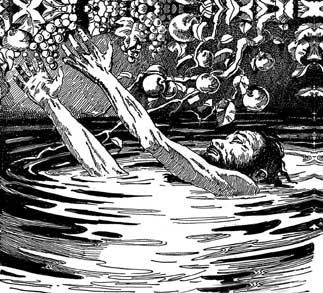 The mighty Zeus said yes, and the eagle flew away happily. Prometheus, on the other hand, was an unhappy camper. He continued to be chained to the rock, and the eagle and his distant relatives visited him every day to feast on his unending supply of liver.

This wasn’t the first time that the Mad Hatter from Mount Olympus punished lesser mortals in this inhuman manner. Tantalus, one of the many sons of Zeus, suffered a similar fate. It so happened that once Tantalus had invited all the gods for lunch. Tantalus, like his father, was as crazy as a peach-orchard boar. For the main course, Loony Tune No: 2 served them his own son. He had chopped him up into tiny pieces and mixed him in the stew meant for the gods. Most of the celestial guests sensed that there was something and did not touch the main course. When Zeus was told what his son had done, he flipped his lid; he killed Tantalus and condemned his soul to the underworld. There, as a form of punishment, he was made to stand in knee deep water, with delicious fruit hanging over his head. But every time Tantalus felt hungry and reached for the fruit, the branch went out of reach. And every time he was overcome by thirst and stooped down to drink, the water level receded. No matter how hungry or thirsty he became, he was condemned never to taste the fruit or drink the water.

The King of the Gods did this to his own son. Now do you believe me when I say that the gods are a mean bunch? Oh by the way, it is from Tantalus that we get the word ‘tantalize’.