“What does the protagonist of The gentle man who taught infinity have to say about the teaching-learning of mathematics?” Before I answer that question, a little bit of the story…

It would be apt to begin with a quote by American historian, Henry Adams: “A teacher affects eternity; he can never tell where his influence stops.” My relationship with Mattur Venkatadri Channakeshava, the bespectacled gentleman who taught me math in school, is a lot like that.

Thirty years after I graduated from the Baldwin Boys’ High school, Bengaluru, I decided to write about him. I felt this deep urge to reconnect with him. I wonder why it took so long. After all, I must have passed by his house many times in all these years. I could have met him as many times as I wanted to, but I didn’t. I guess it is all about waiting for the right day.

As Adams says, we pick up many things from our teachers in school, things which affect us in ways that we can only understand much later. And what we pick up keeps visiting us time and again, in ways we cannot foresee. 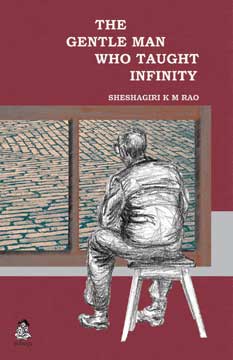 I wrote about Channa because of two impulses – hope and anger. I believe they are a potent combination. I’m angry because our schools are letting our children down. Survey after survey by the government of the day or those outside the government, shows the abysmal depths to which we have managed to plunge. We cannot sink any further. The only way is up. The crisis of learning is hidden, eating away at our vitals as a society. Imagine – a child who reaches the 8th grade carries many years of ‘learning deficits’ in all the subjects – what she manages to learn, in effect, is only the equivalent of the 3rd or 4th grade! What a waste of her time! I’m not getting into a longwinded discussion on why this is happening. The undeniable fact is that it is staring at us, challenging us to respond.

I’m hopeful because I have started telling Channa’s story. There is much that we can imbibe from it to make math learning enjoyable. It is now a drudgery for many, with the robotic and mechanical ways of teaching that we have perfected over a long time. Stories like Channa’s, I hope, will help us come out of those miserable depths. And out of ‘math-phobia,’ which afflicts many. At least then, children might look forward to school.

I have chosen to write about an extraordinary teacher, his subject and his craft. I want to spread the word, so that we all – teachers, parents and those interested in education – can learn a thing or two from him. Stuff that we can do and enjoy. And see the difference. I believe this would be a useful and positive thing to do.

I was fortunate to have learnt high school mathematics from Channa. He didn’t make me a rank holder or gold medalist in the subject. No, he didn’t. On the other hand, I was just an average student of the subject and very nearly failed in it in the ninth grade. But he made me love the subject. That is what he wanted to inspire in all of us, even in a school that was conventional and which prided itself on exam results, a school where corporal punishment was rife. So, let me set out the few things he did which I remember to this day.

Channa made us enquire and think. He was always gently nudging, pushing us to figure things out on our own. His teaching was always based on first principles (read ahead to know more). You never got a sense that he was ad hoc. He taught us to see a pattern in the madness. Channa taught us mathematics because he wanted us to pursue truth and beauty, not mere exam grades. Yes, you heard me right! Never mind if none of us became mathematicians. For me, he made math fascinating. Finally, Channa was a great hit because he was a master storyteller who loved his craft. He is the eternal student of the subject who carries within his being a deep understanding of its structure, mysteries and paradoxes. These, he happily shared with us. Which is why, I remember his teaching even after so many years.

So, we stood on his shoulders and looked beyond, enjoying the mathematical landscapes that were made visible. Beautiful and often startling landscapes.

Channa took us on a roller coaster ride of the world of mathematics. Beyond the syllabus and our sterile textbooks, from cyclic numbers to Euclid to Gauss to Bhaskaracharya to Cantor to Euler and the bridges of Konigsberg, to Barber’s paradox and Fermat’s last theorem and the four-colour problem, interspersed with discussions on infinity, Channa allowed us to glimpse the real mathematics. These intriguing patterns, problems, mysteries and paradoxes which are the heart of mathematics, he said, need to be understood by us as students to truly appreciate and love the subject. The best part was how they were intimately linked to what we were studying in school. The sad part was that they were not included in our syllabus. Our curriculum and syllabus makers deprived us of the best parts, year after year. In our examination centered system, the joy of learning and discovery is lost. Channa reminded us that this need not be so, even in a regimented school.

Suddenly, mathematics had a very human story, lots of meaning, and a character of its own. Channa demonstrated how even the most complex ideas of mathematics could be made simple for kids like me. I wanted to know more and more. So what if I was a so-called average math guy?

So, what does the protagonist of The gentle man who taught infinity have to say about the teaching-learning of mathematics? While reflecting on this question, I would like to first point out that the teacher, his craft and his subject are inseparable. Therefore, the lessons that can be culled out from Channa’s story straddle these three elements. I have outlined a few below:

Finally, I would like to say that there is much that we can learn from Channa to enrich the teaching-learning of mathematics at school, especially during times where acing the examinations seems to be the preoccupation of schools, teachers, parents and students. When you do lay your hands on the book (The gentle man who taught infinity), jump into the fray. What else could be more important?

The author works as an Education Specialist with UNICEF. Though he began his work as a Mechanical Engineer in 1991, his keen interest in education led him to become a schoolteacher a few years later. Since then, his work in education has spanned a variety of contexts with local, national and international organizations as well as with the government. Over the years, he has worked with children, developed educational interventions in diverse contexts, facilitated processes of organizational reflection, has done educational research and written on contemporary educational issues. He is currently working on his second book, which is a work of history located in education. He can be reached at [email protected].