It is interesting to look at the chemistry of an element, particularly one that is important biologically. In the last column, we looked at sulfur. This time, I would like to describe the chemistry of nitrogen. Unlike sulfur, nitrogen is a colourless, odourless gas, quite inert and most of the compounds are also colourless. All this makes experiments hard to do and to observe directly. However, it is well worth studying the chemistry of nitrogen and its compounds, since these provide an excellent illustration of the biogeochemical cycles. In fact, it is at the very centre, if we consider the essential nature of its compounds to life. We can draw two cycles for nitrogen, the global one showing the movement of nitrogen and its compounds in natural systems (fig 1) and a biological one showing movement of nitrogen through the biosphere (fig 2). The two of course overlap, and both are strongly influenced by human activities. The industrial fixation of nitrogen is equal to or exceeds the natural fixation of nitrogen, and cars and power stations rival thunderstorms as sources of NO2. 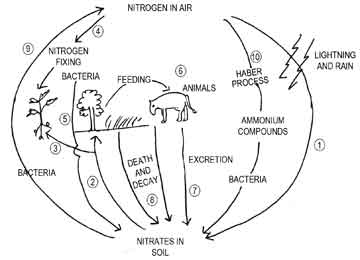 An interesting aspect of nitrogen chemistry is that the compounds of nitrogen do not accumulate in the earth /air unless there is no water for organisms to grow. If there are compounds of nitrogen, there are organisms, usually microorganisms, which use the reactions to generate energy. The other interesting aspect is that nitrogen compounds are not very harmful themselves but undergo reactions that enhance the effects of other pollutants. Nitrogen Dioxide catalyses the formation of sulfur trioxide from sulfur dioxide, reacts with oxygen in the presence of ultraviolet light to form ozone and reacts with unburnt hydrocarbons and ozone in the presence of ultraviolet light to form compounds which create photochemical smog. These are very complicated reactions, best studied in high school or college, but the outlines can and should be discussed because they illustrate human influences on biogeochemical cycles. Students hear a lot about pollution and so it is interesting to illustrate it. In this particular topic, a lot of explanation and a few experiments and demonstrations are the norm.

The author works with Centre for Learning, Bengaluru. She can be reached at yasmin.cfl@gmail.com.