Courtesy, respect, consideration for people, animals, structures, systems and things. The willingness to share. Honesty. Punctuality. Fairness. The list can go on. Some are values, while others are an expression of values. Add to that an appreciation of beauty and goodness in all spheres, and a demonstration of this through the arts and in society. Ask anyone, and they would agree that these should all be part of our way of life, our culture. Yet when we look around us, we see on a daily basis, violations of what we might in theory agree are important principles to live by. We jump queues, we spit on freshly painted walls, we refuse to listen to opposing viewpoints and dismiss unfamiliar expressions of thought. So does “our” culture come from what we believe in or does it reside in how we act?

We all get tied up in knots around what culture is, and whose culture is THE culture. We are caught up in arguments around the superiority or authenticity of different cultures, and often come to a decision that maybe we should leave culture out of the equation altogether, particularly when it comes to schooling. When we do think about it, we reduce the notion of culture to a few symbolic acts – a dance here, a song there, a small play here, an art workshop there. And along the way we lose sight of the “thing” that is everywhere, but can disappear if we don’t pay attention to it.

Culture in the broadest sense is the way in which we express our values, our view of the world and our relationship with both the living and inanimate parts of it. We learn it in direct and indirect ways, from our homes, our neighborhoods, our play groups, and importantly, from school. We imitate the ways of those we hold in esteem, fear, or affection, and over time, that becomes ingrained in our behaviour and even attitudes.

When we decided to focus our year-end thematic issue on Culture, we began with a vague idea of the contours of the topic, knowing only that we wanted to talk about the indefinable structures, systems and practices that make up the ethos of a school, also knowing that this was an important part of the learning that every child takes back home and onward into life. We knew it would be a difficult canvas to cover. But our amazing set of contributors helped us draw out and clarify the theme, dealing with it in multiple ways, each of which offers a way into understanding and thinking about school culture and how it shapes the individual as well as society. In this collection of articles, we explore the ways in which a school can intervene to create the kind of society we would all like to be a part of.

What’s the impact of your school’s culture?

Why is it that Khushnaz wishes everyone she meets while Pimmi averts her gaze when passing anyone? Why does Javed think that spitting on the road is disgusting, while Khush spits without a moment’s hesitation? Why does Neeta jump up and offer her seat on the bus to someone older or disabled while Hitesh, sitting next to her, sits firm with an absolute sense of entitlement to his seat?

What we are confronting here, is that amorphous intangible called culture. Each of the people mentioned above has unconsciously absorbed or consciously adopted a set of norms, assumptions and beliefs about how people should behave alone and in different social groups. Their assumptions and beliefs, examined or unexamined, when shared with significant others, become “their” cultural framework from which they relate to and make sense of the world and other people.

In schools, the rules and norms listed in the handbook are not necessarily the culture of the school. Culture is better identified as the manner in which relationships and behaviour are exhibited among students, between students and teachers, between teachers, and so on, between all stakeholder groups and within those groups, with each other. 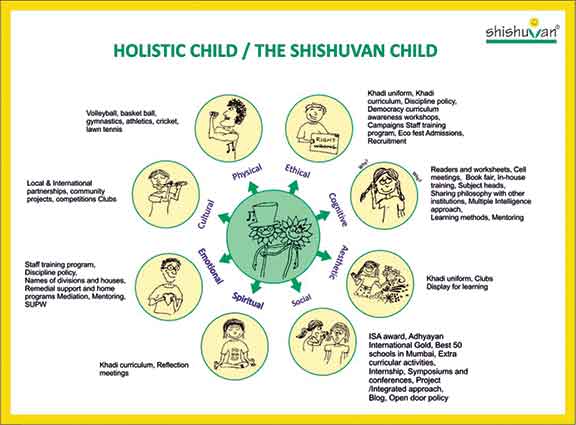 As a school leader, I worked with my colleagues to create a vision of the environment that would be provided to every child. To deliver this vision, we developed a collaborative culture in the classroom, staffroom and boardroom, in PTA meetings, in administration meetings, in events and in the day to day running of the school. At all times, in creating these forums, we asked ourselves how we were making it possible for children to grow holistically. (see the result of one such discussion in the picture above)

My work as a leader was to ensure that every person in the school, child or adult could share their point of view and feel heard. I especially ensured that students learned how they could have as loud a voice as the adults in the school through their involvement in the curriculum, PTA meetings, class norms, circle time, personality development, house meetings, student councils and the student parliament.

Along with my leadership team, we partnered with parents in ways that enabled them to consider multiple points of view, including that of children other than their own, before making a recommendation to the school. And equally, ensured that leaders, teachers and administrators actively listened to parents when commending or objecting to what their children were doing in class or in school.

What fuelled these endless discussions with my colleagues was a strong desire to have children growing in a truly democratic environment. One in which they were heard first and also had to listen with respect to each other and their teachers before arriving at a consensus. I believed that if children could grow for 15 years in such a culture, they would be able to contribute effectively as leaders and citizens in a pluralistic country with multiple voices and competing needs.

Its wasn’t enough to design opportunities and provide the spaces within the time table for speaking and listening to each other – we also wanted to check if this was having the desired impact on the students. And in the review of our impact, we again involved the students, teachers, parents and all the other school stakeholders.

All school leaders articulate (or subconsciously express) their beliefs regarding the culture in which children need to grow and develop. I find – after 370 school reviews, that the best leaders consciously and collaboratively develop a vision of the student and of student voice and life in their schools. This enables them and their leadership teams to think deeply about how they will grow the culture that matches their vision.

The best schools bravely ask themselves fundamental questions such as – “How will we know that we are authentically modelling our values and achieving the desired school culture in which our students can grow and flourish?” and “What should we be looking for in the way children and adults in school relate to each other, that will give us the confidence that we are living true to our values?”

The author is Founder Director, Adhyayan and was Executive Director, Shishuvan, from its inception till March 2013. She can be reached at kavita.anand@adhyayan.asia.