A couple of weeks ago I saw a group of young adults sitting in a circle on the lawns of a park. They were to play a game and one of my students, Joel, doing his Masters at EFL University, was the ‘leader’.

He told them that they were going to play a game and asked them to do something that seemed very simple. He said, “It is very simple. Count from 1 to 50 by turns, if your number is a multiple of 5, you must not say the number but shout “Buzz”. If it is a multiple of 7, again, don’t say the number, shout “Fizz” and if it is a multiple of both 5 and 7, just shout “Fuzz”. If you make a mistake and I hear you even ‘muttering’ the number, then you are out of the game. He also told them that whenever someone gets out, the number count goes back to one and everyone begins all over again. (This I realized, as the game progressed, was good motivation as those who wanted to remain in the game wanted the numbers to go higher. At one level, all of us love a challenge.)

The ‘game’ seemed simple and I thought to myself, “What fun, these kids should enjoy this! They were all either graduate or post graduate students, had all passed school and could definitely handle basic multiplication tables!”

But the reactions were not “Yay, very easy, let’s play”. The protests ranged from “Difficult!” to a “I can’t play this” to an emphatic “I am bad at maths, leave me out.”

Since I teach basic statistics as part of my testing courses, I recognized the typical statements made by humanities students.

But Joel would have none of it. He just told them, matter of factly, “Apply your mind! Think! Come on! It is only simple multiplication.”

One of the kids there took two minutes, thought about it and said: “There is only 1 number between 1 and 50 that is a multiple of both 5 and 7, so ya, it should be easy.”

Joel heard this, very cheekily offered to ‘up’ the level of the game and said that if they wanted he could ask them to go up to 100 but the group would have none of it, including the girl who thought it would be easy!

Anyway, he got the whole group to say ‘yes’ to the 1 to 50 count, and though a tad recalcitrantly, they agreed. 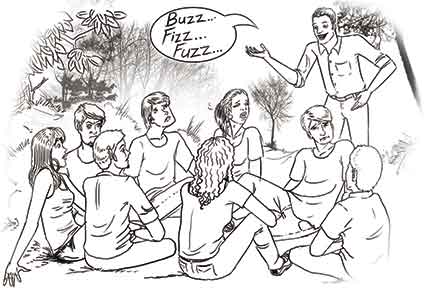 The game began, and out of sheer interest and fascination, I watched. In the first two rounds, those who got the multiples of 5 and 7 got out, and a “Fuzz” shout was never reached. But the game went on as Joel was relentless. This was just fun, but peer pressure being what it is, after the first two rounds, less people got ‘out’ and soon, Joel was able to ‘up’ his game level and take the count up to 100.

I will not insult you by doing your math for you; you can work out how many Buzzes, Fizzes and Fuzzes ought to be ‘uttered, or rather “shouted” in a 1 to 50 or 1 to 100 count. I am not writing this, either, to test your multiplication skills, I am taking that for granted.

I am sure that some version of this game is being played as ice breakers, as stress busters at get-togethers and so on. But I would like you instead to think of this game being played by a teacher who is teaching mathematics or simple arithmetic. The game made me wonder, If I was the teacher, and I was playing this with my students in school, either inside a class, or outside on the verandah or corridors, or in a playground, what could I do with it? My children would be caught up in the game and would forget themselves. The fun of the game, of ‘not getting out’ would take over and they would play blissfully unaware of me being there. Those who were not sure of their five and seven times tables would get them straight, but even that was not what hit me. I realized that it is occasions like this which would provide excellent opportunities for me as a teacher to do some continuous and comprehensive evaluation. Just by watching children engrossed in a game, I would be able to find out which of my students makes careless mistakes, and who has problems with which table (a good example of continuous evaluation) and who has problems in concentration (a good example of comprehensive evaluation). I could make mental notes and then, either re-teach the tables, or make the student aware of her mistakes, “You forgot your seven times tables, didn’t you” or her successes, “You never got out once… mmm, good concentration.”

As a teacher, without conducting an ‘official’ test, I can use such games, and there are plenty of them, (language games, number games, Name-Place-Animal-Thing etc.) to find out what a child can and cannot do, what a child has learnt or mastered or needs help with. I may not ‘interfere’ with the game and teach then and there, but I can make mental notes and use that information to teach later.

Such observations are what continuous comprehensive evaluation is all about, not the entering of the marks for tests one, two, three and four, and quizzes one, two and three in the register.

Observing children while playing, we as teachers will also know which child is a bully, which child helps others, is confident or reticent, etc. We make mental notes and later write them down; with ease, one aspect of comprehensive evaluation gets done.

We need to remember that the monitoring that a teacher does, walking around the class while children are doing an exercise and noting down problems is also continuous evaluation. These ‘notings’ after all, are what the teacher uses to decide whether to give more exercises, or problems or go on to the next lesson.

CCE is about knowing which child has problems with buzzing, fizzing, or fuzzing, and not about who got 80 or 20 per cent in which test.