In the school where I have worked for a number of years we have tried to integrate art in some form in the different subjects so that art is not just a special lesson unconnected with other forms of learning and doing. From ancient times art has included not just the visual arts of painting and drawing; in the Shilpa Sastras 64 art forms are listed, including the performing arts of music, drama and dance, the arts of conversation, jugglery, cooking, weaving and stitching, riddle making, playing with toys and poetry. Carpentry work, gardening and the arts of healing are also mentioned. 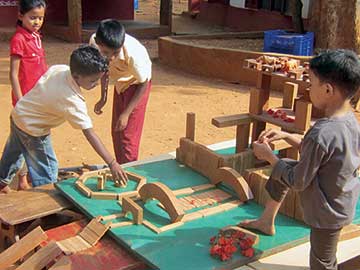 Learning through artistic activities opens us to learning through a physical engagement with materials such as clay, paint, thread, paper, involving our various senses. It also fosters an imaginative, playful, and explorative participation in learning about the world. This is true of all subjects whether language, math, environmental studies, science, or history and geography.

Howard Gardner discusses how we have multiple intelligences but in the school context the logical-mathematical intelligence is given a disproportionate importance. He suggests that we should also value, for example, visual-spatial intelligence, musical intelligence and bodily-kinaesthetic intelligence. Gardner argues that all these other aspects of intelligence need to be fostered.

Drawn into words
We tend to think of language as something only verbal but visual language is also a vital tool for thought. The Russian psychologist Lev Vygotsky writes about how make-believe play, talking, drawing, and writing are part of a unified process. He suggests that visual language is complementary to the written word and that image-making is one vital way that all human beings can express themselves and make and share meaning of their experiences.

One example of how word and image can be brought together is to encourage young children to keep a diary by drawing pictures of their experiences and noting things that are of particular interest to them. The diary may include dramatic events like an excursion, a wedding, or a time of sickness but it may also focus on seemingly small everyday happenings such as the making of a den, playing a game, or the observation of a bird.

Initially, the child may just name some things in his or her picture to describe the different elements such as ‘playing ball’, ‘bus going’ or ‘elephant, sun, bath’. Gradually, the child may elaborate further and give more detailed descriptions. The child may not use full sentences or standard forms of language but the words will be the child’s own and said in the way that is familiar to the child and the picture will reflect the child’s direct experience. In this way children can generate their own texts for reading and communicating with others. The way a child shifts from random pictures to relating the different elements in a more coherent manner often indicates the beginning of storytelling.

Learning to write can be a very mechanical and stressful experience for children if there is too much emphasis too early on the reproduction of correct and perfect forms. If children are given the space and time to explore their own markings whether with a stick on sand or with pencil, crayon, chalk, or charcoal then they will often quite effortlessly begin to sort and sift the differences between picture and word, random pattern and letter, sound and visual symbol.

In Chinese we see very explicitly the link between the visual symbol and the meaning of the spoken word. Arabic, Chinese, and Japanese writing are often done with a brush and the form of the letters has a flow and a texture which have a pictorial element. In many languages letters have been “illuminated” to heighten the aesthetic quality of the written word. It is interesting to note that Rabindranath Tagore’s drawings often came out of doodling round a written text which he imaginatively elaborated on to create a unity between word and image. 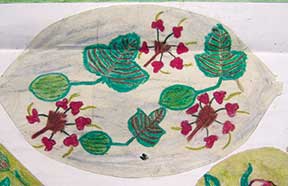 The link between a child’s first spontaneous scribbles and writing can be encouraged so that children can begin to develop a playfulness and inventiveness with the rhythm of repetitive visual patterns. Before children begin to formally write they can explore the possibilities of pattern making with chalk, paint, or crayon. This can later lead to decorative writing in designing a book cover or making their own “illuminated” manuscripts. A variety of books in different shapes, sizes, and styles can be made and children can be encouraged to design and illustrate them.

Decoration is one element of visual representation but drawing also provides a tool for expression. Drawing, using a range of media and techniques, gives the opportunity to experiment and play with new ideas and feelings. Pencils, pens, charcoal, and crayons each have a different quality and lend themselves to different forms from comic strips to colourful scrolls.

A text can come alive if, for example, children are each asked to illustrate one particular scene or character of a story that they found memorable. Children’s own individual stories, or collaborative stories, or the re-telling of a familiar story, or a collection of favourite poems can be shared through both words and images. Drama, role play, clay work, and puppetry are other entry points to a narrative that the child has herself evolved. It is sometimes helpful for children to build up a word picture before they begin so that their images become more personal and connected to experience.

Even a subject like grammar can be made more enjoyable and memorable by using artistic activities. For example, in second language learning a book of adjectives could be made where children characterize the word through the letters of the words themselves.

Playing with the sounds and meaning of words through songs, poems, tongue-twisters, rhymes or riddles offers an experience of language that is more than simply functional. This playful aspect of language usage can be humorous, creative and very satisfying to children and adults alike. Here, repetition often has an intrinsic worth and gives shared delight to both speaker and listener.

These early experiences of the arts become foundational to developing an artistic sense as children mature. Gesture and make-believe play become the basis for dance and drama; a child’s first visual markings and explorations into line, texture, shape, and colour can become the basis for the arts of drawing, painting, writing, and sculpture. The rhythm and intonation of the spoken word is linked to music and song.

Designs, patterns, and numbers
Maths for young children does not have to be dry, abstract, and decontextualized. Even very young children can make designs from natural materials and in doing so effortlessly learn about numbers. Children can make garlands from petals, pods, leaves, and twigs and think about making patterns by paying attention to number, shape, colour, and size. 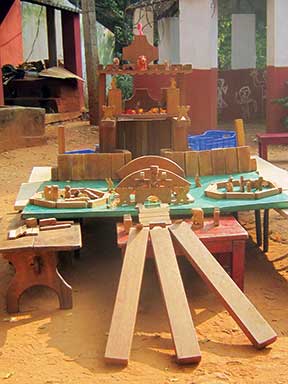 Activities with construction materials can also provide a more open-ended and creative approach to learning about science and math in an integrated and imaginative way. For example, many children enjoy making constructions with wooden blocks and given space and time will create all kinds of scenes and stories round their structures of towers, zoos, palaces, temples, or forts. This brings together not only symbolic and dramatic play but provides an exploration into the ideas of balance, stability and the limitations, and possibilities of different materials and shapes. How high can a tower be built? How can you make a tower less wobbly? Can a lever be made that will dramatically topple the whole structure? Which shapes make a wall more stable?

The essence of maths is concerned with relationships and patterns and children can be inspired to create designs in a variety of ways such as mandalas with natural materials, collages with waste materials and weaving with paper, thread, or fibres. Simple printing techniques using paint, ink, and crayon offer further possibilities. Young children often create harmonious patterns quite unselfconsciously and intuitively. Gradually children can be introduced in a more focused way to ideas of symmetry and tessellation and can look at the environment to see such patterns in nature, in built structures and artefacts. Traditional designs in weaving can provide a rich source of ideas. The rich Islamic tradition of complex geometric patterns and the ‘kolam’ designs of South India can also be an inspiration for children to explore. 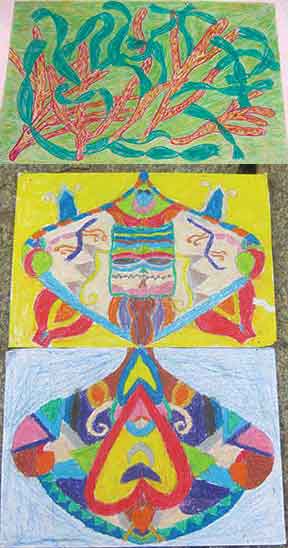 Making three dimensional shapes either using nets or through techniques of origami will help children in a holistic way to grasp the nature of angles, faces, and edges of solid shapes.

Connecting through craft
A key aspect of Gandhi’s concept of Basic Education was correlation, whereby theory and practice are firmly welded together. Gandhi proposed that crafts should be linked to different aspects of learning. For example, needlework, woodwork, book-making provide children with the practical application of measurement and design and practice in the use of various tools. Such activities have a built-in discipline that is needed for making something with care and thought. Cooking and gardening are everyday activities that quite naturally help children to look at how things change or grow and indirectly provide a practical basis to understand elements of the life sciences, chemistry, and economics. 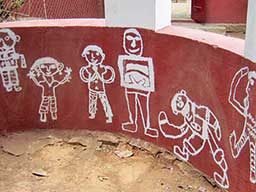 Although there are many aspects of drawing, we usually associate the visual arts with expression and emotion. Yet, drawing can also be a way of looking closely at the natural and human-made environment in a precise and analytical way. Such observational drawing can help children to be aware of details whether it is sketching a particular tree, recording an experiment, representing a building or drawing the parts of a cycle. Such drawings could be both from life or an arrangement of objects to form a ‘still life’. Drawing from life can take many forms and might include asking children to pose for each other to capture movement and action in a quick sketch.

Quite often words are inadequate to describe a process but a drawing can capture different perspectives and dimensions. For instance, map making is one way of representing the world. Initially, children could be asked to draw a pictorial map as though from an aerial view of the way from home to school. This would mean including pictures of the things they see and arranging them to convey direction and distance. This would prepare children for the more complex and abstract task of map making.

As children move form learning about the immediate environment and begin to study about less familiar places and times through geography and history, craft and artistic activities can enrich their learning by imaginatively entering into other cultures and climatic regions. Such projects include making clay models of the seals of Mohenjo-Daro, painting a volcano or exploring flight through the construction of gliders and kites can give a practical and well-informed sense of other ways of living and experience.

Technology has added new and significant ways to explore the world but this should not be a substitute for handiwork that require the touching, manipulating, and investigating of physical materials. The virtual world of computer generated drawings and effects has its own discipline and meaning but they are qualitatively different from the sensual, physical interaction which handling ‘stuff’ demands.

Artistic activities in the school context are not a luxury or mere entertainment but are an integral part of learning, exploring, and communicating. Sometimes teachers think that art is just for the talented few or alternatively an option for children who are less academically able, but artistic activities can provide tools for thought to help us amongst other things to express feelings, experiment with ideas, analyze and process our observations, communicate more effectively and perhaps most importantly connect more closely with people and things around us.

The author has been working in an alternative school for the last 40 years. She has authored a number of books related to language teaching and art education and has worked part time at TISS Mumbai and APU Bengaluru. She can be reached at [email protected].