That smile! I can’t forget that smile. It was not a typical wide and happy, or polite smile. It was a trace of a smile. Her forehead seemingly in the process of relaxing from strain, her jaw was not relaxed yet, and her eyes were sparkling. But a smile it was! It was the joy of insight. The phrase “Aha moment” barely hints at what she experienced. It was an epiphany for her.

I was teaching numbers and demonstrating the value of numbers. I had written ‘1’ on the blackboard, holding a chalkpiece and I said “This is one chalkpiece.” Then I held two and said, “This is more than one; these are two.” Then I held three hairpins in my hand and did the same. Then I asked, “How many fans are there in this room?”, “How many arms does the fan have?” and so on. Then I gave everyone an exercise involving counting, walked around the class talking to them and came near her. She was staring out of the window. I looked to see what she was staring at, and it was a kite flying. She turned around, our eyes met, and she smiled. She pointed to the kite and said, “Woh patang mujhe mile toh mere paas ek patang hoga.” (“If I got that kite, I would have one kite.”)* 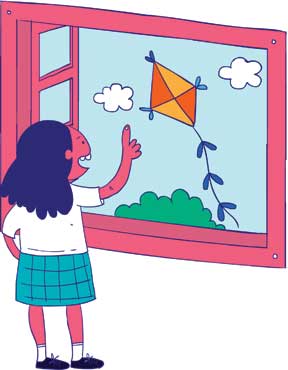 She had expressed the concept of numbers and values, something she had not known or comprehended before. Now if she heard the sound “ek”, it would translate into the value “1” for her, the same would happen if she saw the number written somewhere. Both the sound “ek” and the shape of “1”, acquired new meaning for her. They would form a numerical value in her consciousness. How did the aural and visual stimuli, which she would have seen many times before, now translate into a value? It was not the value alone, but also conventions. “1” and “1” communicate the same value. They used to seem entirely different before, but now they mean the same.

She saw the kite, and her mind did not respond with the image of “1”, but with a value, which is inexpressible in images or sounds. Value is beyond symbols which are mere representations. The value is not contained in the symbol 1, or the things she was looking at. It is in her mind. The objects are secondary when she sees them as “one object”. She knows that she can apply it to any object. She does not have a word or gesture, or a smile to express it; it was an abstraction that registered in her mind. That smile was telling me, “I know. I see ‘1’ everywhere now.”

That is not all. When she pointed to the kite and spoke, she was translating the aural and visual conventions “ek” and “one” into a speculative sentence: If I got that kite, then I would have one kite. She was also predictive and seeing the abstract into the future. Wow! The amount of cognition that happened in that moment is complex.

I am sure that for the next few hours, or even days, she will frequently use this concept. “1 banana. One girl. One head. One table.” All of us do this when we learn a new word; we keep using that word many times for a few days. Hold on! There is more to epiphany than the cognitive part of value, symbol and conventions. She was bubbling with exhilaration of understanding a new concept, and its addition into her consciousness. Exhilaration happened after; what happened before? How did she feel when the concept was being formed in her mind?

What was it like to be learning?
Let me assume that something happened when she was in class that initiated her thinking on the path of learning numbers. The shape of the number 1, the sound of my voice, the murmur of her friends, a child who loudly said, “Teacher, he is pushing me…”, the black colour of the board, the table, smell of things around her, the breeze blowing through the window, sound of a hawker marketing his wares, maybe there was some other memory playing in her mind…. Human minds are not static at any point. Numerous things happen which lead to her consciousness at that moment. It is not mere thinking. I should ask, what was the state of her consciousness? What was it like to “be” the way she was before, and in that epiphanic moment?

Am I being too speculative? Actually no, I really want to understand how she learnt that abstract idea at that moment. What was it like to be her, and what did she do then, and what happened that made her do what she did?

She was aware that she learnt, so if I am able to describe her consciousness in detail – physical, cognitive, affective and all aspects of her consciousness – I might find something interesting about how the epiphany happened. Many things coming together led to that epiphanic moment. Some factors contribute logic (moving from what she heard others say, to arriving at an understanding of the value of 1), some form feelings and attitude towards this logical process, and some others make her feel a certain way about this entire process of learning. Simply put, the state she was in had one part, what she did with the sound “ek”, the image “1”; and an attitude towards it, wonder, doubt, surprise, liking, etc. Similarly, she was perceiving everything around her the way she was then, and things around her determined her consciousness too.

But why worry about feelings and emotions in mathematics! But we have to. We cannot ignore the way we feel about something. That primer on phenomenology that I read a while ago, starts with the basic idea that when we are conscious, all things around us that are already there, become the way we perceive them. We perceive things and even ideas and concepts and form an image that fits into our Self. Our memories, self-image, and the way we see it, determine our perception of it. For example, there are potato chips on this table near me. But I see a plastic cover (which I dislike), with chips packed in a disordered manner (Ugh!).The chips were very tempting when the man was frying them, and I promptly bought them. But they are not tempting at all at this moment. Now I see them with the awareness of the plastic cover, the disarray and that fried chips are unhealthy. My perception of packed chips enters my consciousness attached with all those memories, feelings, knowledge and emotions. At the same time, my consciousness now is determined by the pack of chips too. Now I am someone who regrets buying this pack of chips.

It is the same with ideas and concepts too, whether they are numbers, operations, gravity or inertia. We feel a certain way about things we have learnt. When I remember multiplication I feel an exhilaration remembering how I used to happily multiply two 3 digit numbers in my mind. But when I think of integration, I have a sinking feeling at the pit of my stomach remembering how I struggled to understand it and never did. Feelings, emotions and desires are an integral part of our perception of things around us. It is a two-way relationship between objects and our consciousness. 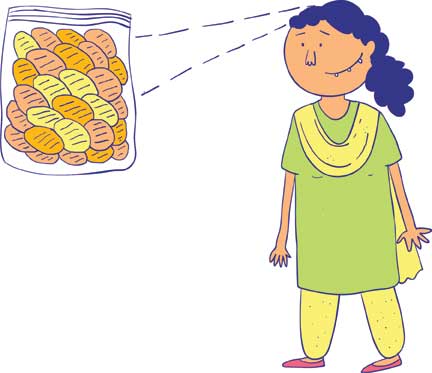 Learning is essentially led by a cognitive process. But this cognitive process is dependent and constantly influenced by the attitude towards it: liking, desire, wonder. This attitude automatically brings emotions into the learning process. At every step of the learning process she has to continue liking it. One stray thought could have taken her elsewhere. If her focus had shifted towards the colour of the blackboard, she would have been contemplating something else altogether. Moreover, at the end she has to also like how she felt when she understood symbol, convention, value in their abstruse form. These feelings, qualia as it is called, determines the process she moves along; and for that she has to be conscious of her consciousness. She has to be self-conscious, and intentionally navigate herself through the process. Only then did it become an epiphanic moment.

Some of us teachers imagine only the intentional part, and the logical sequence, and that informs the way we plan our classes. Some others go to the other extreme and only worry about qualia – how children are feeling – resulting in almost sidelining the cognitive. We either reduce it to cognition, or reduce it to pleasure or joy. Well, some of us only imagine the self-consciousness and decide that this child is not concentrating. She is not willing to concentrate, and we leave it at that.

What if…
What if rather than looking out the window and smiling at her the way I did, I had done something else. What if I had just shrugged, or walked past her indifferently, or said, “Why don’t you do this fun exercise I have given!”. I would have intruded in her consciousness in a disconcerting manner, which would have affected the qualia. It could have dramatically changed the way she was at that moment. She could have ceased to like what was happening to her at that moment, the way she liked it. Though she had fulfilled all epistemological conditions for learning, she would not have liked what she learnt. Worse still, she could have thought, “Maybe what I said is incorrect. Maybe there are more than one things in a kite…”

There is one more important step to the process of learning – I would say the most important part: We always limit our imagination of the process of learning by saying, learning should happen autonomously. In this situation, she learnt all this by herself only. I did not go into her mind and tweak her consciousness. From the beginning to the end, it mattered to her, she figured out how to go about it, she felt good about it, and she learnt the right thing. Every step of the process, every object she added to the cognitive process, driven by her own desire to own a kite, were intended by her own self. The learning had a strong element of her subjectivity. She completed the final, most important part of learning: liking what she had learnt, how she had learnt, and affirming to herself that she had indeed learnt herself. That maintained integrity with her consciousness. That made it authentic!

The smile in her eyes was an authentic smile! The smile was telling me, “I thought of this. I arrived at an understanding. I like it. This is mine. Now this is part of ‘me’”.

Thank you, Prof. Amitabh Bhattacharya for narrating this incident during a Mathematics workshop way back in 2007. Every time I think about it, I get a richer explanation of how the child might have learnt. Needless to say, this is a fictional account written in first person.