Lessons to teach, a class of students to face every day, notebooks to correct, staff meetings to attend, parents and management to satisfy…isn’t this the lot of every teacher? One would surmise that a harmonious and peaceful ambience would facilitate the efficient functioning of a teacher who has to grapple with all these things. One would certainly not recommend unrest. And yet, this is a plea for just that: blessed unrest in a teacher. Where, you may well ask, is the place of unrest? And blessed unrest?

As a teacher educator who works with teachers in schools, I have indeed truly experienced the value of touching that place of unrest within a teacher, allowing it to slowly express itself and gradually, facilitating the teacher’s own exploration of a well-thought-out way out of it. In this whole process, more often than not, I have found that many other (hidden) doors get unlocked, and the teacher gains fresh insights into areas that did not, at first, seem to be linked in any way to the cause of unrest. It would not be an exaggeration to state that there is enormous scope for growth of the teacher’s personality in this journey.

In many parts of the world1, Action Research has been used2 as a means of developing the reflective practitioner, and particularly, the reflective teacher. It is beyond the scope of this paper to review the status of action research for teacher development, so a few references are cited at the end, and three actual cases are described here. I have found in Action Research my answer to the question: how can one customize the route to development for each teacher? I find that the beauty in this process is that the outcome cannot be predicted: why, even the next step cannot be known until one begins to undertake the journey in all earnestness. To illustrate my point, I will cite some examples taken from true cases (some names have been changed to preserve confidentiality) that I have encountered, during my work as a teacher educator.

The doorway to Action Research (AR) is unlocked through some discontent that is experienced by the teacher. While facilitating the identification and framing of a teacher’s AR problem, I employ various means of nudging the teacher to zero in on the burning issues that (s)he is keen on resolving. In my experience, I have seldom come across a teacher who has no discontent at all. [For an account of how one such case was handled by the Principal of a school, refer pages 230-233 of reference 3 below.3]

Interestingly, one’s source of disturbance serves to roll out the road ahead. Moreover, since each one is discontented about different things, the process of development unfolds in a unique manner for each teacher – that is meaningful. Most importantly, the act of framing of the problem turns into a very interesting problem – in itself. As Schon4 has termed it, “The situation is complex and uncertain and there is a problem in finding the problem.” 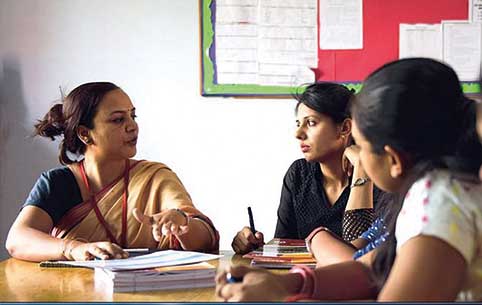 Ratna is a senior citizen who teaches in a residential school in Andhra Pradesh. She was assigned to teach EVS to a combined class of IV and V, after having successfully donned roles like needlework teacher and Dining Hall Manager. However, she stepped into the shoes of a very popular EVS teacher (who had left the school), and had to face the expectations of the little children that she would teach exactly like he had. Further, she had to counter the stereotyping that the children had done: by casting her into the role of a loving grandmother who could “only teach needlework”. From a harried, helpless teacher who just could not manage her class of unruly nine and ten-year olds, she went on (in just four months) to become an innovative and fine teacher of EVS. A dramatic turnaround was perceived by her students (who now declare that they love her teaching), her peers (who now request her to help manage their classes in their absence) and her Principal (who always knew her high degree of motivation, but now, again appreciated her dedicated efforts to steer her class in the right direction). All this became possible through Action Research (AR). Her journey has been captured in the research paper5 that was recently presented at EPISTEME6.

Annapoorna is a teacher in an alternative school. She began her AR by expressing a whole host of self-doubts like: an admitted tendency to constantly question herself, and to be exceedingly self-critical. This made her wonder if she was missing out on enjoying the present moment: is she too much in a “next-next” mode? It also led her to wonder if she was guilty of doing the same thing with her students, too! Upon further prodding, Annapoorna confessed that she had recently been asked by the management to don the role of a mentor, and she was not comfortable with the idea. Perhaps, she admitted, she would have liked to continue being a teacher for one more year, instead of taking over as mentor right now. Interestingly, she also added that she seemed to be missing a challenge in her work, currently. I facilitated her AR and helped her see that mentoring was itself a challenge which was coming her way and that she seemed to be shying away from it. Slowly, over a period of six months, Annapoorna conducted her AR methodically and rigorously, and is now in a position to state: “Now, I would say that I am not too tentative about myself and I am just flowing naturally. I am not being judgmental – especially about myself and, to some extent, about others. I would say that my AR is in a completion mode, as I have taken charge of myself as mentor. I am ready to go ahead and face the fear of giving feedback and receiving feedback as well. Thank you!”

Surabhi is a primary school teacher in an alternative school. Given the freedom that the school allows for students as well as staff, Surabhi began by sharing that she had noticed a steady deterioration in discipline amongst children. She therefore began by framing her AR problem thus: To bring about an appreciation of the importance of discipline in the students of Classes I to IV. Over a period of six months, she discovered through AR that there was a lack of a collective holding of the importance of discipline even amongst the faculty. So even before bringing home the value of discipline to children, Surabhi felt the need to help the primary school teachers feel strongly about it. However, she was (understandably) hesitant to adopt a prescriptive approach, as she wanted the concern to be collectively held for any sustainable change to be effected.

So she began by probing the reasons for the (perceived) difference in the manner in which various teachers reacted (or did not react) to acts of indiscipline by the students. It panned out that most of the teachers felt things were okay, “after all, they are just kids,” that they (teachers) need not take any steps “just yet”. Slowly, through discussions, these teachers began re-examining this assumption – once it was unearthed – and then, they swiftly overcame their resistance to address these issues with children. This manifested visibly as better discipline in previously turbulent spaces such as the dining hall, the library, the Assembly Hall, etc.

What had been the turning point? The question (that emerged in one of their meetings): Is there a paradox between insisting on discipline and the philosophy – as it is commonly understood – of this school? had proved to be very powerful indeed, declared Surabhi, in drawing in the ‘resistors’ as well. She finally observed that her AR had brought things to another level now: as, having successfully wrought a significant improvement in the level of discipline in primary school, she is presently acting on the principal’s request to expand her AR to encompass the middle and senior school as well!

In all these three cases, what began as persistent unrest over a seemingly localized issue led to a transformation at a higher dimension: of teacher-student relationship in the case of Ratna, of self-confidence in Annapoorna, and of a collective understanding as well as authenticity in upholding the school’s vision in the case of Surabhi.

All it took was to stoke the fire of unrest: blessed as it is!

Teachers can also refer to the Cover Story by Rohit Dhankar which appeared in October 2013 titled, “Can Reflective Practice be taught?”

The author is the Founder-Director of Thinking Teacher, an organization that is working towards creating a network of reflective teachers. She can be reached at thinkingteacher22@gmail.com.