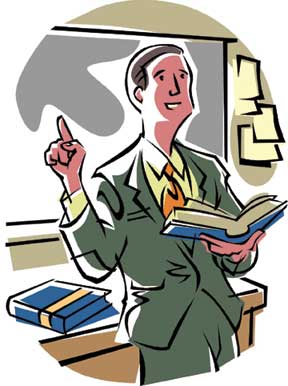 Now what’s different about teaching in the USA? Aside from all the mundane material conveniences of copying, printing, and sourcing library books, which in Indian academia might be termed, privileges, it’s mainly the students that make the difference. Now let’s steer clear of gross generalizations and undertake a comparative exercise based on empirical evidence, quantifying the differences along various parameters. That might perhaps offer adequate accuracy and rigour and give Teacher Plus an analytical-scientific edge. A possible but not likely scenario!

Having monopolized the last word space (and not just quantitatively, check my popularity ratings among the magazine readers), only a subjective rendering of world events must be expected. So when asked again, what’s different about teaching in the USA?, I am likely to roll my eyes and eventually agree to speak about it (as the editing staff is rolling their eyes at how cleverly I have so far said nothing substantive to justify this use of space).

American undergraduates, the ones that manage to attend eminent schools, some with solid parental funding, others with lifetime loans, often manifest a sense of entitlement that has no equivalent in India. Individual cases are more pertinent here than data collected from large-scale surveys. For instance, when given an assignment about self-reflection and critical thinking to discuss an important event in their life, a student chose to narrate her tale in the form of a poem. Now poetry in and of itself when written by masses is bearable, but this particular poem in question deserved a yawn and half, which essentially translated to a humdrum B in gradespeak. She contested the grade, asserting her poetic authority as validated by her parents and teachers since the time she put pen to verse. After listening patiently to her controvertible evidence, I smiled and explained that I was no expert on poetry and that I was the reader-grader of this assignment, that her poem “didn’t speak to me” (read: it hurt my eyes), and that obsessively rhyming every line sometimes butchers the delicate constitution of a poem. After some negotiation about changing the grade, I told her she was more wedded to the grade than the poem, and that she should rewrite it without a rhyme scheme while solely depending on metaphors and imagery. Of course, there was no follow-up.

Another student emailed me on the day of the submission of a take-home midterm to inform me of his broken laptop and delayed submission. While there was no request for extra time (he took it for granted that extra time is offered in such emergencies), he wanted me to respond “ASAP”, which I did. I told him he could have a day extra, and use campus resources to finish the assignment. I heard from him 3 days later with the submission and the happy news that the laptop was not fixed, and if I needed a hard copy, I should let him know “ASAP”. Again, I stretched the strings of my patience, and sent him a polite email saying I could not accept this due to inordinate delay. His response I am tempted to reproduce verbatim, but let me paraphrase instead. It began by reminding me of the nature of his emergency that warranted an ASAP response (much like the unavailable first-aid), and that as for me, the Teaching Assistant, my job was to serve his needs and accommodate his requirements, while also promoting his learning. The ‘reprimand’ transported me to colonial times… I escalated the matter to the professor and after some discussion, it was decided that, the student in question, had not submitted the assignment on time, and thus failed of natural causes.

Now, more such stories have to remain untold given that only 500 words written by me can make it to print. Also, as they say for all that we deny ourselves these days, the economy is bad.