It’s 8 am in the morning, the first day after summer break at Maria Montessori Grundschule in Stuttgart, Germany. A few days ago, I had requested to be an observer in the classes to build my understanding of the methodology and classroom processes adopted by the school. Frau. Angelika Müller-Zastrau, the headmistress had readily agreed and invited me. While waiting in the lobby, my eyes fall upon a bulletin board with pictures of teachers and facilitators at the school. Two beaming faces catch my attention – Ben, a handsome Labrador and Chaplin, a wise-looking Basset Hound.

A few minutes later I find myself in the quietest primary classroom that I have ever seen. It’s a day after the break. Yet, with minimum instructions each child gets to work independently finishing their activities one after another. At a very prominent position in the classroom, Ben rests on a blue mat. When the decibel levels in the class increases, Ben looks up, children notice Ben’s discomfort and the noise fades. Ben goes back to rest. I sit speechless.

Over lunch Frau. Müller explains, “Yes, Chaplin is the first dog in a school at Stuttgart. Ben joined him later. Our school has been using classroom and school dogs to work with children. Dogs have helped our children learn responsibly, helped shy children come out of their shell and calm nervous children in the classroom. It has been a transformational journey. For all of us.”

Germany’s schools opened their doors to dogs in the late 1990s. It’s now grown into a School Dog Program where trained dogs are brought into schools as facilitators and therapists. In India the concept is still new. “Yes, we don’t yet have school dogs but we do have therapy dogs who work with children in schools,” says Rohini Fernandez, co-founder of Animal Angels Foundation. Animal Angels Foundation works with special needs children and adults with mental illnesses using animal-assisted therapy.

Personal journeys
“The idea of having a school dog came to me from a colleague who wanted to train and bring her dog to school through the School Dog Program. That’s how Chaplin became a part of our lives. When Ben came to our family, he was notorious. Given his temperament, we hired a special dog trainer. A few days into the training, Ben became calmer. One day, the trainer took Ben to the school she worked with and noticed that Ben transformed in the presence of children. She came back to me and told me that Ben has the potential to work with children and can become a school dog. Working with Ben, integrating him into our lives and the school has been one of the most exciting journeys of my life,” says Frau Müller who recently published an illustrated storybook Ben that details Ben’s transformative journey from being an anxious, impulsive dog to an understanding and peaceful friend.

Unlike Frau Muller, Ms Fernandez always knew she wanted to work with animals, especially dogs. “My parents disliked pets, so I never grew up with one. It was while I was studying psychology, in the USA that I came across the term ‘animal assisted therapy’ and I knew this is what I wanted to do.” Since then Ms Fernandez has moved to Mumbai and established the first animal assisted therapy centre in India. 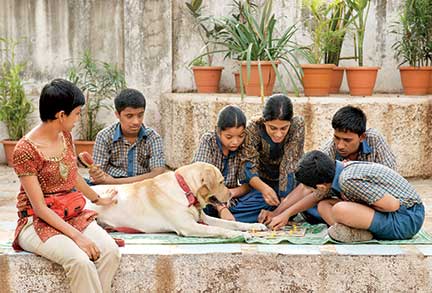 Dogs as therapists
Over the years dogs have been used as therapists across the world, especially with children. “Ben helps facilitate sessions for special needs children and children who are shy or lack confidence. Dogs provide an emotional support system for the child. They are non-judgemental and open to them. This unburdens the child of performance pressure and makes it easier for the child to break the ice in a classroom and participate,” says Frau. Muller. Ms Fernandez quotes an example, “We were working with a particularly traumatized child who had witnessed her parent commit suicide. After the incident she had stopped talking. No amount of counselling was helping her until we introduced a therapy dog. She slowly started talking to him.”

Dogs are known to have a calming effect on children with autism. They also help motivate children with locomotive disabilities and speech impairments.

School and classroom dogs
Unlike therapy dogs who work with specific clients, school and classroom dogs are a part of the school system and everyday classroom sessions. They are assigned specific tasks. Chaplin in the Maria Montessori is a classroom dog. He accompanies the teacher in the classroom and stays through the session. His very presence has a calming effect on the children. The children can go out with him, pet him, feed him, and play with him during recess. It builds a collective responsibility between the classmates. When they share the affection and care for a ‘class’ dog, a bond forms among the classmates and this strengthens their ability to work in a team. On the other hand, Ben is a school dog and accompanies the headmistress, through her rounds in the classrooms in the school, her meetings, and talks. He has a larger presence in the school and is known by every child and parent.

Dogs from Animal Angels Foundation are attending school dogs, who visit the school for a few hours during the week to work with a specific group of children. They conduct classroom sessions on a need basis.

So what does it take to be a school dog? The dog must meet the following basic criteria to be trained as a therapy dog:

Both Frau. Muller and Ms. Fernandez agree that being with dogs also makes children more responsible of their own behaviour and sensitive to the needs of the dog. “You need to set the rules for the children too”. The children are taught to take turns to pet the classroom dog and never to overwhelm them. They are taught to ask for permission, pet gently, and say goodbye so that the dog understands that they are parting. “These basic rules need to be followed to make sure that the dog stays calm, comfortable, and is able to work well,” says Frau. Muller.

As I wrap up my day at Maria Montessori Grundschule a teacher tells me that the children are excited about an idea that they came up with. They want to write a story with Ben as a detective and the other animals in the school, Chaplin, the chicken, the rabbits and the fish helping him solve a grand mystery. The children then want to enact these animals in a play that’s inspired by the story for the school annual day. I can’t help but smile and pat Ben for all that he managed to achieve at the school. He now is a part of the children’s growing imagination.

The author is an educationist from Bangalore. She can be reached at lakshmikarunakaran@gmail.com.