When Bollywood takes on an issue, people listen…at least for the short space of time they are in the cinema hall. Nothing touches us like a movie can, with all its melodrama and overstatement, it has the potential to tug at the right chords and make us see things that even the most hard-hitting of factual presentations cannot. 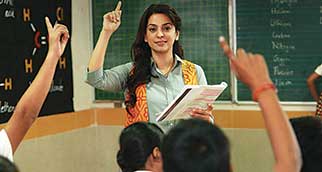 The film “Chalk n Duster” is by no means a great film by any of the accepted standards of movie-making (film critic Rajiv Masand calls it one of the most “forgettable” films of the year!). It has a predictable story, overdone and sometimes cheesy dialogue, a painfully extended climax, and some pretty plastic performances. Of course, the main roles, played by veterans Shabana Azmi and Juhi Chawla Mehta, to a large extent salvage the film, which makes the very valuable point that teachers need to be respected and rewarded for the work they do.

But despite its flaws, I did enjoy the film (although, I must admit, the too-long finale á la KBC did make me wish my seat was closer to the exit), if only because I’m a sucker for anything that celebrates teachers. And I could see that the audience was rooting for the teachers too, all through the film. In fact, when we were walking out of the hall, my mother (who used to be a schoolteacher and who must still carry that aura) was stopped by someone who asked if she was a teacher and insisted on giving her a congratulatory handshake!

Apart from the larger comment the film takes on, the commodification of education and the marginalization of teachers, its most endearing feature is the way it takes us into the lives of the two lead characters, with all its complexities and richness, whether it has to do with domestic relationships or the household economy. Commercial cinema usually turns characters into unidimensional beings who are shown only as far as the story requires, losing the fullness of their personalities. So you have the stereotypical “noble” teacher, a jhola-carrying, bespectacled, impoverished character, or the stereotypical “mean” teacher, the severely dressed woman who peers sharply from behind her metal rimmed glasses, or the bumbling teacher, who is the butt of jokes. “Chalk n Duster” attempts to break some of these stereotypes but maybe builds others – the conniving administrator and the unscrupulous businessman. But as someone else in the audience commented, we need to hit people with simple, hard stories that make the point. And the film does do that, in a way that makes you feel good…about being in the profession.

That’s enough reason to watch it, in my book!