I was entrusted to teach social studies for grade VII and Telugu as a second language for grades IV and V. After a few weeks of school, our principal wanted me to take up the third language (Telugu) for grade VII as well.

These were a bunch of high energy kids, and they were becoming very difficult for the current teacher, who was handling them along with her other classes. I agreed and started taking the classes.

In my group of children, four were from Telugu-speaking families – three were residents of Singapore, they hardly knew any Telugu, and one was from South Africa, who could speak but was very weak in writing. He barely managed to read. But he was really very interested in learning the language. Three other children were from Kerala, and were absolutely not interested in learning Telugu at all. One boy was fairly better in reading the language. Two boys were from Tamil Nadu, of who one was interested in learning to only speak Telugu, while the other was totally disinterested. One child was from the US, so she was new to the country, too. All these students felt compelled to choose this subject, as they had no other choice.

I was told that they should be able to read and write at least the alphabet. With this heterogenous mix, I was really wondering how I would handle the class, which was also a resistant bunch, to top it all! I took it up as a challenge.

I sat with them individually and found out their level of interest in the language. Except two, the whole class expressed interest in conversing in the language. The two exceptions were not even inclined to converse! All of them had one question: what do they benefit by learning this language? “After all, we will not be using it after we leave school.” In the absence of any other choice, they found themselves locked in this situation. 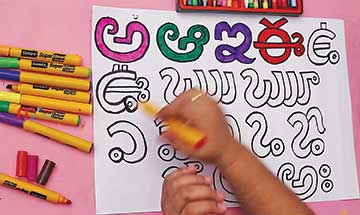 So, I began engaging them in short conversations. But these were very awkward, what with all sorts of accents and vocabulary! I tried convincing them that this language would enable them to communicate with the maids. This drew the unanimous response that they will manage through body or sign language, or better still, teach their maids English.

I persisted by reading out short stories, and these caught their interest. Slowly, they began comprehending the texts. I chose interesting geographic information and topics of general interest like tribal life, amazing facts, and one-minute stories from children’s magazines. They started listening carefully.

I gave them the alphabet and asked them to give me words that started with the same letter. Now this turned into a game and slowly they got drawn in. Some of them chose to focus only on proper nouns like names of people and places. A few of them came up with interesting words.

Then we had a school assembly, and the second language children from grades IV and V performed a few skits and recited a few poems in Telugu.

Seeing this, the third language (Grade VII) children expressed a desire to perform some skits. I was surprised, perplexed and even horrified – how was I to manage the situation? But the batch turned out to be very good. When I asked them how we could achieve this, they came up with an idea that they would translate and then transcribe the English script, and learn the dialogues. I immediately took to the idea, and to my delight, so did the whole class. My conditions to them were –
1. They should bring the story with the dialogues, which I would help convert into Telugu.
2. They should learn the pronunciation properly.
3. Any negligence vis a vis the language will not be tolerated.

They agreed and the class was divided into three groups.

The enormous effort that they put in and the way in which they diligently worked on the project took me completely by surprise. They first selected the story and wrote out the script in 3-4 classes. Each group had one Telugu-speaking student and so, that child was asked to translate the script into Telugu. Since they had not yet mastered the Telugu script, the dialogues were simply transcribed in English. They then learnt the meaning of the words so as to deliver the dialogues with expression, and I taught them the right accent with correct pronunciation. All this took 8-9 classes. They learnt it fairly well, and, by the end of the term, they performed the skit during the assembly. The performance was a success and even drew the appreciation of the Telugu-speaking staff. The principal also was very happy.

That’s how my seventh-grade children turned around my Telugu classes – the same classes that I was groping for a way to conduct! I learnt a lot in the process.

Now the children miss the classes so much, that they want me again for their third language class.

The author is passionate about teaching. She can be reached at ratna.kumari@gmail.com.