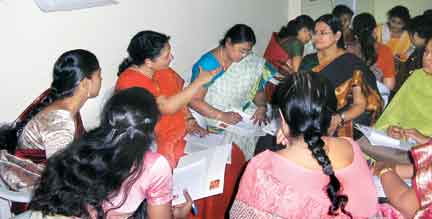 Decades ago when I started out as an editor for a publishing house specialising in school textbooks, the constant demand from sales colleagues for ‘key books’ – referring to the answer key for the exercises in the textbook – used to get to me. Many others in the editorial department were likewise, plain irritated or at times, even infuriated. Surely teachers would not and should not require them, or so we believed.

Most of us had studied in schools catering to the privileged, and we hardly had any understanding of the ground realities in Indian schools. Only when we moved out of the confines of the elitist editorial framework and actually met teachers, did we begin to get the picture right.

It was a revelation that most teachers who taught English had majored in other subjects in their degree courses and wanted to be doubly sure that they were not teaching ‘wrong’ English, especially incorrect grammar. That is where the ‘key’ came in, to countercheck their understanding. Chastened thus, we viewed the situation with a lot more understanding and less snobbery. Similarly, culturally ‘alien’ stories found no resonance with many children because they just did not relate to them. We had chosen a story about two boys, one black and another white, who were not in the least aware of their ‘difference,’ and contrasted it with the condescending attitude of the ‘white’ mother, who thought all blacks needed hand-me-down clothes, were poorly educated and did only menial jobs. The reason for our choice of the story in a text for eighth graders was to make them aware of discrimination in our own country based on caste, class, and colour, but it was just not acceptable. Now with better awareness of what would go down well with the students and teachers, we planned teachers’ editions with notes and guidelines for the teacher. This was the first step in ensuring that materials were both teacher and student-friendly.

The workshops that were organised for teachers brought home to us the constraints that teachers faced, especially in private schools. The management was naturally interested in retaining the numbers, and no influential parent could be opposed in any way. Strangely, this meant that they could not leave out any part of a textbook, or even change the order in which they taught the contents! Some parents wanted to ensure that the book was completely ‘taught’, because they had paid for it! More active ones went through the corrected notebooks, and found mistakes the teacher had not corrected, or worse still, which she had inadvertently made! Parental interference was the reason, quite a few teachers cited, for rushing through portions and ‘finishing’ the book, even if the load was a tad heavy for the end user. Thus, we learnt to plan the book in relation to the teaching periods available. We calculated this taking on board the number of working days available in a scholastic year, and the time that a teacher would require for testing and revision as well. 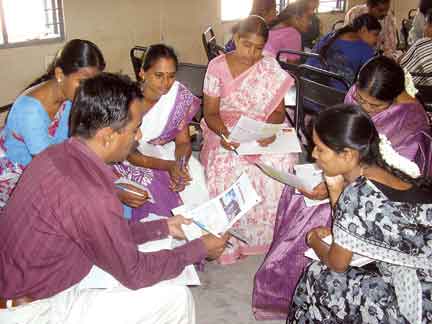 The interaction that we enjoyed with the teachers at these workshops also gave us ideas that we could share with other teachers. Nissim Ezekiel’s Night of the Scorpion was transformed into a skit in one of the schools, and the name of god ‘buzzed a hundred times’ had the students chanting verses from scriptures across religions! It also gave us an insight into the children’s ready and equal acceptance of various faiths.

Our imagination was too limited to allow us to picture the harassed teacher desperately attempting to do the impossible. We continued to believe that we had everything right in the books, and all that the teacher had to do was teach! Some of the ‘creative’ activities turned out to be unmanageable in extremely large classrooms, and teachers wanted ‘worksheets’ that kept the class under control. I recall a prose selection we had used for jumbled reading. A non-fiction text was divided into three parts, and the learners were to be put in groups and asked to read only one of those. Then they had to put the whole text together, explaining the part they read to their partners or counterparts who could complete the piece. When this was attempted in the classroom, it turned out to be a holy mess, because the teacher had no control over the chaos, and the pupils, in excess of 50 got nowhere. The teacher explained the scenario to me, and said that all her resources went into deciphering how she could retrieve the text, and just ‘teach’ it! Here we learnt a lesson in classroom management. Worksheets that gave a breather to the student and the teacher were made available. We also included lesson plans that a teacher could use, especially if she were new to the subject or the career.

The information technology revolution across the country increased the demand for audiotapes and CDs as teaching aids. Students, parents and schools embraced the exciting new change with open arms. Here again, many teachers helped us decide the kind of help that a learner could use. So, the poems were read out, and the difficult and ‘foreign’ words pronounced, for the benefit of teachers and students.

The explosion in the field of digital learning again makes us revamp and fit content to suit the technology-enabled classroom. Increasingly, the younger generation is attracted to the visual media, and we have to channelise their interest to benefit their learning as well. Teachers with abundant classroom teaching experience are involved in the creation of such e-learning materials, working in tandem with illustrators and animation experts. Thus, school textbook publishers are always dependent on the feedback and assistance of teachers to make textbooks more practical and, at the same time, educational. This symbiotic relationship is constantly evolving, and we hope we reach more and more teachers and learners in all parts of the country, to usher in better learning for future generations!

The author is Executive Editor at Ratna Sagar P Ltd, New Delhi. She can be reached at nagalakshmi.bala@gmail.com.