Towards the last section of Rabindranath Tagore’s Kabuliwallah, Rehmat, the kabuliwallah, is sent to prison for murder. After years, he is released and comes to visit Mini, the little girl he had known and befriended long ago. But Mini is a young woman now, and today is the eve of her wedding. Dressed in bridal finery, she barely recognizes Rehmat, her old friend who used to give her dry fruits and nuts and with whom she had chattered so merrily in her childhood. It is then that Rehmat realizes his own daughter, whose handprint on a crumbling piece of paper he has held close to his heart throughout the years of his prison sentence, is likely to also be an adult, and a stranger to him now.

I have had the advantage of reading the original story in Bengali and know how poignant this part of the story is. When I found it missing in a coursebook that was being assembled (“curated”) for std. 7, I was reminded of the marketing representative’s instructions – after “important subjects like science and mathematics” English books “should not have long chapters” or “be a burden.”

To lessen the burden of a less important subject like English, apart from deleting the soul of the story to make it shorter, what are some of the other measures that are taken?

Anonymous authors simplify the text of books that have copyright/reproduction formalities attached to them. Gone are the witticisms of Lewis Carroll, the delicate descriptions of Oscar Wilde, or the excitement of Sir Arthur Conan Doyle. Having diluted (“simplified”) the text, these authors create questions based on their versions of the classics. Then, following, but not adhering to the “competition books” in the market, authors can set out to add (“not burden”) extra information (“general knowledge”) that the design team will interrupt (“make appealing”) with varied fonts and colours throughout the text flow. 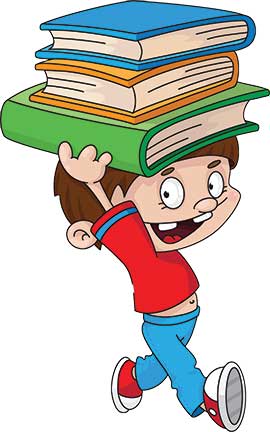 A student reading such a textbook is provided with blurbs full of “general knowledge”, such as for example, when the film of Kabuliwallah was made and who acted in it. Or maybe an internet link with a beaming emoticon suggesting where nuts are found in India. Or maybe some unusual information about flowers in Kashmir, which was Rehmat’s home.

There is, of course, no harm in knowing more, but unfortunately, this further interrupts the pleasure of reading a piece of literature which has already been butchered. If we complain that students today cannot concentrate, we certainly do not help them by using such distracting, irrelevant content in course books.

A course book or reader with poems and stories is often “mapped” standard wise (grade wise) to a workbook, which is meant to reinforce what is in the course book. However, because the workbooks are supposed to sell independently as well as with the course book, it is only the grammar content that is “mapped.” Grammar exercises are usually games and crossword puzzles and there are blurbs and bubbles to fill in. Doubtlessly, this is also done in the general interest of not making English a burden, but it goes nowhere in terms of consolidating the learning of the passage if the workbook is used along with the reader.

So we have now an array of nearly-identical books that sweep the market, each vying wildly with the other and all being referred to as “competition books.” If this term means what I interpret it to mean, these books all run the same race. They roughly have the same number of pages, they cover the same topics with supposed variations and they are colourfully illustrated so as to make an accordion view attractive. As books have come to be seen as products like any other, competition books come packaged with workbooks, teacher guides, CDs (which I have not seen or heard) and goodness knows what other paraphernalia.

Perhaps advertisers have advantages in naming biscuits “Delishus” and announcing ice-creams that bring “Happyness,” or to tell us of “Klassic” buildings. (Would the biscuits taste any less delicious, or the ice cream bring less happiness, or buildings be less classic if the spelling was correct?) English, a language which is now bereft of adjectives, thanks to the all encompassing “a” words (“awesome”, “amazing”) the sheer laziness of attention to detail (“whatever, “whoever”) the continuous stop gap of “like” and uncorrected diction (“instance” for “instant,” “consent “ for “concerned”) now shows itself in textbooks for schools, in words such as “do-able” along with expressions such as “what all,” “cool” and “cute” introduced as early as standards 1 and 2. In the std. 3 and 4 readers that I was going through, there was a design for an “invite” to a birthday party that students had to fill in. Clearly the word “invitation” is many letters too long to learn.

“All languages develop over a period of time,” I was told.
No doubt.
“And we have to remember that these books must reach places where English is not spoken well. The books must be easy.”

Yes. But by that logic, why would extracts from Shakespeare need to be reproduced in original in the std. 7 and 8 readers? Especially, because everything else is simplified? Will students who have come upon easy versions of other texts be able to comprehend Shakespeare in the original?

So, here is the syllabus that books sell on – diluted passages in language that is developing, disconnected matter, fragmented grammar, and Shakespeare in original.

The author is an educationist and children’s writer based in Mumbai. She can be reached at bublabasu@gmail.com.