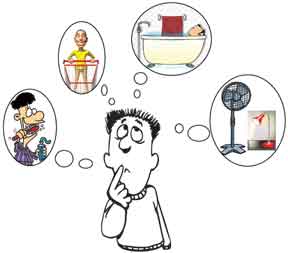 When a colleague of mine introduced me to a little story book called Mr Forgetful, I read it with great delight and amusement. It seemed like the perfect thing to share with children, both for its simplicity and its capacity to induce laughter. On my second reading, I was struck by the idea that one story could inspire many different stories. This led to a project for students of Standard VI at Muktangan as part of their continuous and comprehensive evaluation. Here are some pointers to help you try out the same project in your school.

Read out the title of the story to your students – Mr Forgetful. Ask them to think about the title and guess what the story might be about. The objective is to get them to reflect on how a title can often throw light on the plot. Elicit answers and put them up on the blackboard in the form of a mind map. If something sounds silly or weird, do not reject it outright. You have offered students an opportunity to use their imagination, and they might want to let it run wild as they predict what lies in store. It is often great fun to hear the amazing range of things students come up with. There is a lot of scope for laughter in the classroom as they share their thoughts. And there’s just so much more material for stories of different kinds to take shape!

Having sparked off your students’ curiosity, read out the story slowly and carefully, pausing wherever required, modulating your voice in keeping with the emotions being expressed. This will help them appreciate the nuances of the story, the little details that create impact and hold them captive as listeners. Do not explain anything at this point. As a teacher, this is a difficult urge to resist – the urge to explain, for fear that the student may not understand. And in the bargain, we sometimes over-explain, and foreclose the possibility of any surprise. It’s true that not all students may challenge themselves to listen between the lines, make meaning on their own, and trust their individual interpretations. However, there is no harm in beginning to challenge everyone a little bit so that they are nudged outside their comfort zone to learn. Just read with expression. Questions, if any, can be answered later. Ask them to listen carefully, to not get stuck if they don’t understand the meaning of a particular word. Encourage them to guess the meaning from the context.

The author worked as a member of the English faculty in the Language Department at Muktangan from June to December 2011. He can be reached at chintan.backups@gmail.com.