Everybody loves a story! In fact, “God made man, because he liked to hear a story!” So say the Africans. And God in his wisdom made a sound decision!

And so men have been weaving and telling stories since they learnt to speak. And even before that, by drawing and painting on the walls of their cave homes. These stories have been retold, passed down, adapted and translated over and over, without losing any of the infinite variety. 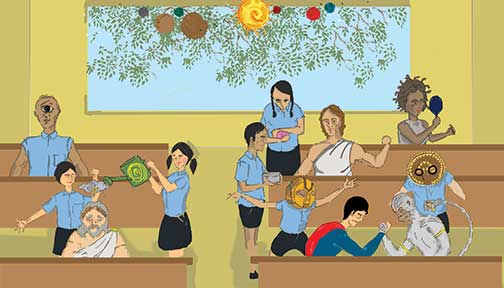 Myths and legends along with folk tales and fairy tales form a part of these ageless collections of stories. It is difficult to differentiate between a myth and a legend… it is easier in fact to point out what is common to both! The main difference has to do with how far the story is close to the actual event. What we call legends are generally stories that have a historical event or person as their starting point. Myths are sometimes based on legends but are altered in a way that makes them useful to teach people how to behave or to give an explanation of the world around.

So then, are we saying that legends stretch and myths distort facts? And if that is so, why on earth should we teach them to our students? This brings us to the recent and very interesting best seller ‘Myth=Mithya’ by Devdutt Pattnaik. In Pattnaik‘s words ‘Behind the mythology is a myth. Behind the myth, a truth: an inherited truth about life and death, about nature and culture, about perfection and possibility, about hierarchies and horizons. This subjective and cultural truth… is neither superior nor inferior to other truths. It is yet another human understanding of life.’ Joseph Campbell, the great American mythologist says explicitly that the point of the myth is that it is “not a lie – it is a metaphor, a way of reframing the truth” in a way that is easier to understand.

The teaching of mythology provides many varied benefits to students of all ages. The biggest benefit lies in bringing students in contact with a variety of world cultures while comparing those cultures to their own. Similar stories may also appear in different cultures, reflecting traditional shared beliefs that can be discussed and compared. The wide variety of myths and legends means that they can be used in all kinds of contexts, at all levels of language competence and with groups of different ages. They are usually easy to follow and understand. They often use clichés and stereotypes. There are typical sets of immediately recognizable characters that appear in many tales: a brave knight, a king, a witch, a chief, or prince. They reflect, in a simple way, the idea of good and evil. Many contain a moral, which can be used in assessing the understanding of literature. This makes such stories good for developing skills of inferring meaning from context.

The author teaches History and English at the middle and senior school levels at Modern High School for Girls, Kolkata. She can be reached at [email protected].