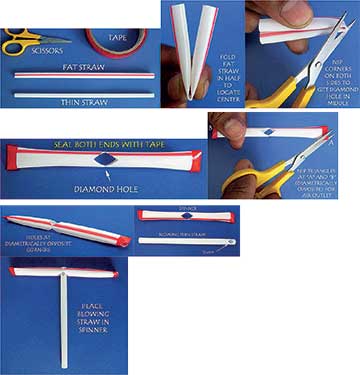 Materials required: A thick straw, a thin straw, a scissor, and a tape.

Experiment: Fold the thick straw in half so that you can get the centre of the straw and now cut the ends. You will now have two diamond shaped holes in the straw. The thinner straw should fit easily (loosely) inside this hole. Place the straw so that holes are facing up and cut two corners of the straw. Seal both these ends with a tape. On each of these ends make triangular cuts on the diametrically opposite corners. This is the straw that spins and we will call it the spinner.

Now, take the thin straw. Cut out a diamond shape at one end of this straw. Note this will not be a hole as in the thick straw on both sides. This is a hole only on one side of the straw. We shall call this our blowing straw.

The straw spinner is ready.

Things to take care: The thin straw should fit loosely. Try keeping the blowing straw facing down vertically with your mouth on top and spinner down when you blow. This will make the spinner stay down on the hole of the blowing straw.

Further explorations: This is a great experiment to explore further. 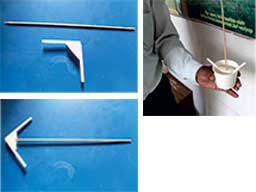 Materials required: A straw, a wooden stick, scissors, tape, a glass of water.

Experiment: This is a great and yet extremely simple toy that children can play with. It illustrates some basic concepts and is great toy to have fun in the class. This is a 2-in-1 toy.

Put the blower in the mouth, dip the other straw in the glass of water and blow hard. A wonderful mist or spray will come out. It is great toy to play with in summer.

Now insert or attach a stick on the rubber piece so that this stick divides the 90 degree angle of the straws in two equal parts. Hold the stick, dip the joint of the straws in water and spin the stick. This becomes a sprinkler as the water will come out of the other end of straw like a sprinkler.

Explanation of mist/Spray: As you blow through the straw, the air rushes out with great speed. Some path of the air is blocked by the other straw so the air goes over this other straw with even greater speed. This leads to a low pressure over the other straw and water rises in this straw. Rising water hits the air and becomes a mist/spray. The creation of low pressure due to high speed air is according to Bernoulli’s principle. This is the same principle which says that we should not stand near a fast moving train as low pressure created there can suck us towards the train and consequences can be extremely dangerous. 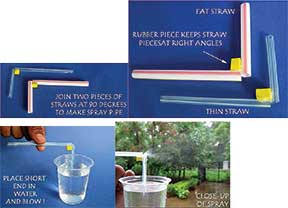 Explanation of sprinkler: Spinning things tend to fly out. So when we spin the stick, the two cut straws spin with it. They have some water inside since they are dipped in water. This water experiences centrifugal force and this force makes it try to go outside. Hence it rises up the straw. The more it rises, the higher the force that it feels since it is farther away from the centre and so it goes all the way to the top and flies out of the straw like a sprinkler.

Materials required: A piece of straw, a potato.

Experiment: This is an interesting game/challenge to pierce a potato with a straw.

Cut a straw of medium stiffness at an angle and try to pierce this inside a potato. The straw will bend and will not go inside the potato.

Explanation: The extremely quick and sharp movement of the straw gives a very large force. If we were to twist and push gradually the force delivered will be much lesser. So you will not be able to do it.

Also, the straw has a very little surface area which contacts the potato. Hence the impact is large. The area of contact of the straw with the potato is the circumference of the straw times the thickness of straw, which is very less. Hence the amount of potato that the straw has to pierce or push is much lesser. If we try the same thing with a pencil, the amount of potato to be moved is much more, so we won’t be able to do it.

Misconception: There is a misconception that it has to do with the air trapped in the straw. You can actually do this experiment without closing the straw. You just have to do this extremely fast. So the trick is the impulse and not the trapped air. Now it might help, but on impact the air will get compressed so the part of the straw which is piercing is without any air. The part of the straw that is remaining outside will have air (compressed) and will make the straw much stiffer. But this does not lead to piercing of the potato.

The author is an active and peripatetic member of Arvind Gupta Toys. He travels all over the country giving demonstrations of the toys. He can be reached at manishjain@gmail.com.