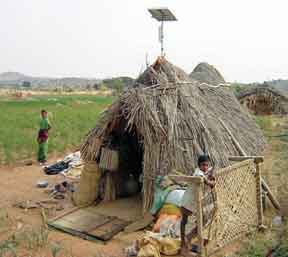 A majority of the world’s 1.6 billion un-electrified population lives in India. More than half of the women and children who die in the world because of indoor air pollution are Indians. These statistics are not being presented for shock value but to put reality right up front. It also puts the 8-9% growth of India into perspective. Now let me throw out one last statistic for the reader – at least 500 million people in India survive on one dollar or less per day. Most, if not all, are the very people who do not enjoy the benefits of energy services that most of us in urban India and rest of the world take for granted.

The growing disparity in energy consumption, which has resulted in the increasing divide between the rich and the poor is socially, economically, and environmentally unsustainable for India. Repeated studies around the world show that maps of conflict zones and maps of energy and economic poverty overlap. Educated Indians – and those we are responsible for educating – should take note of these problems rather than sweeping them under the carpet or believing that market forces and market capital will provide the solutions. Market forces and market capital have never in history solved the basic needs of the poor, in any country.

Poverty, a major threat
The greatest threat to India and the world today is poverty. It is a major threat to social sustainability – the basic fabric of the eco-system needed for all businesses to flourish. Dig deep and one will realize that lack of access to reliable energy is critical to pulling people out of poverty. Access to energy means education, economic development, cleaner living conditions – all aspects many of us Indians take for granted.

The author is co-founder of SELCO INDIA and an Energy Engineer from IIT Kharagpur with a Ph.D from the University of Massachusetts. He is a recipient of the Ramon Magsaysay Award, 2011. He can be reached at harish@selco-india.com.