One of the most popular folk games being played in South Indian homes and farms even today is the game of Chennamane, Aluguli mane (Kannada) or Pallanguzhi (Tamil) or Vamanaguntalu (Telugu) or Kuzhipara (Malayalam). As most folk games go, it is played with a variety of materials and diverse rules. It is no surprise that the game has several local variations and has evolved independently in many geographical locations in India and elsewhere in the world.

Background
As the legend goes, Sita, the wife of Rama was held captive in Ashoka Vana by Ravana, after her abduction. To pass time, she invented and played an interesting kind of Aluguli game called the Sita’s Solitaire. Curiously, it is an absorbing game with interesting mathematical patterns and the purpose of this article is to explore it and suggest ways to use it in schools. 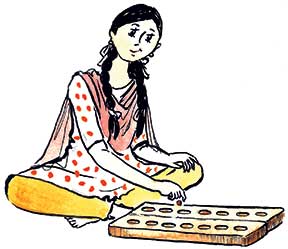 The game
The regular aluguli mane board looks like this.

The board has 7 + 7 holes. A certain number of seeds – usually tamarind or a similar seed – are placed in each hole at the start and the first player picks up all the seeds from a hole of his/her choice and starts sowing one at a time in the holes moving clockwise/anticlockwise. He/she stops at some hole depending on the rules of that game and the second player gets the turn and the game continues.

The author was a mathematics teacher at Rishi Valley School and is currently the Director of Suvidya Educational Centre, Mysore. He can be reached at sngananath@gmail.com.