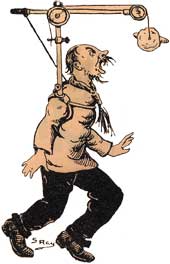 Last August a workshop called Tools in Schools was held in Kolkata, which brought into focus the use of movies as a pedagogical tool. Teachers demonstrated how various subjects could be taught using film clippings, including clippings from popular films. In my presentation, I showed clippings of some popular films and briefly discussed how certain topics in Physics may be taught using these clippings. Subsequently, in collaboration with Prof. Partha Bandyopadhyay, I conducted a session with 60 high school students from different districts of West Bengal to test the efficacy of this method. In this article I describe the outcome of this exercise.

M-A-C-H-I-N-E, the blackboard proclaimed in big bold letters.
Prof. Dubey took out a chalk from his pocket with a flourish that celluloid terrorists reserve for hand grenades, and underlined the word ‘machine’ approximately six times.
“Machine, the basic reason for existence of any mechanical engineer. Everything you learn finds applications in machines. Now, can anyone tell me what a machine is?”
“It is anything that reduces human effort. Anything. So, see the world around you and it is full of machines.”
It was really amazing. Airplane, stapler, spoon, car, blender, knife, chair – students threw examples at the professor and there was only one answer – machine.
“Fall in love with the world around you,” Prof. Dubey smiled for the first time, “for you will become the master of machines.”
“Sir, what about the gym machine, like a bench press or something?” Ryan interrupted the bonhomie.
“What about it?” Prof. Dubey stopped beaming.
“That doesn’t reduce human effort. In fact, it increases it.”

Subha Das Mollick is a documentary filmmaker and a teacher of media and film studies. Earlier she has been a Physics teacher in Mother’s International School, Delhi and St. Xavier’s College, Mumbai. She can be reached at subha.dasmollick@gmail.com.

Partha Bandyopadhyay is a Professor of Physics at City College, Kolkata; a passionate science popularizer, he used to anchor the science programme Quest in Doordarshan. He can be reached at pbandyo@gmail.com.