There have been a series of events in the last few months in Delhi that have had a strong element of cultural protest – exhibitions, films, music, performances – apart from talks and speeches, seeking to attract a diverse audience including children. So, I trotted off to some of them with my son, Imran, with the biggest attraction for him being rock music, a relatively new passion that finds expression in his learning to play the guitar and listening non-stop to bands his parents don’t know much about. 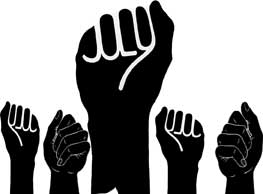 One of the musicians who performed at some of these events is a young man from Manipur who goes by the name of Imphal Talkies. Singing protest songs in the manner of western folk musicians of the Sixties, Imphal Talkies sings and plays both the guitar and the harmonica. The harmonica is attached to a contraption around his head that allows him to play it while using his hands for the guitar, Bob Dylan style. For an almost 10 year-old, that was a feat worthy of deep respect.

At one of these events, I noticed the musician in the audience as I was leaving, and so I mentioned it to Imran the next day.

Me: I saw Imphal Talkies at the back of the hall when I was leaving.
Imran: Oh! So, he always comes to that kind of event.
Me (pausing): What kind?
Imran: You know, the kind where you are against something…
Me: Against what?
Imran: Against the government, something bad they are doing. There’s a word, na. I can’t remember it. With a ‘p’ …
Me: Protest?
Imran: Ya! That’s it. Protest events. He always comes to them.

That conversation made me think as much as it made me smile. Childhood is so much about learning to conform to somebody else’s vision of the world. As parents, even as we desire for our children’s independence in thought and action, we do seek to bring them up in line with our beliefs. The thought that they may (perhaps, will is the more realistic word!) not conform to our vision of them is the one that most of us struggle the hardest with. And so, perhaps, it’s worth considering the act of dissent for a moment.

For children growing up in colonial India, the act of going to school itself meant an exposure to dissent, as they walked past groups that were picketing or burning foreign goods. There are records of middle class school children participating in the call for boycott, for many at the risk of being expelled from schools. Dissent was a part of everyday life, a question you engaged with, regardless of the position that you or your family finally took. In today’s times of increasing conformism, dissent is a shrinking commodity. With the mainstream paradigm being embraced so whole-heartedly, dissent has become something that the “other” engages in. Life, for most children in our mushrooming mall-cities, is about being cool, not being a geek. It’s about wearing certain kinds of clothes, throwing certain kinds of parties, seeking certain kinds of careers. The market talks to them about this, peer pressure reinforces it and parents mostly acquiesce to it. Even school spaces are about conforming – about learning discipline and following rules. So, where are children to learn about dissent? Where are they to learn that it is a critical element of democracy? That it is just as important a lesson as learning to be disciplined and not breaking the law. That we need to follow rules but also to learn to question them. That their conformism is tied to some distant act of dissent.

Or is that something that we have left for the children of Jagatsinghpur, Orissa, for whom dissent is an everyday engagement. As they lie down on the hot earth under the blazing sun and refuse to allow entry to government officials who seek to take over forestland and villages for a mega steel project, these children are no mere audience at a protest event. They are engaging with the larger structures that govern their lives, the very same structures that govern the lives of children in other parts of this country, children like Imran. While some dissent, others consent. Which will Imran choose?

The author is a documentary filmmaker and writer based in New Delhi. She hopes that her work makes children think about the world they want to live in. She can be reached at [email protected].