Could it be an escape? An escape from the daily lived reality? From one’s material existence? From one’s thoughts and insecurities? Could going to a new place, breaking from the routine be about escaping the routine? Not quite, it has proven to be quite the opposite for me. 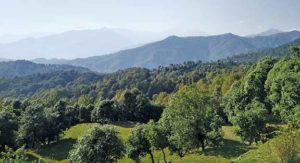 Finding myself in an unfamiliar space, among people I don’t readily recognize and without the security of a set routine to fall back on, I can be and do nothing but be completely present to that moment of unfamiliarity. And in doing so, I am witness to my most authentic self; be it the anxiety in my stomach or the gushing energy in my eyes as I take in my new surroundings. It isn’t an escape; it is getting away from the physical space, yes; but not getting away from myself. It is about immersing in a slower rhythm and listening more intently to my thoughts and emotions. Travel isn’t a necessity to allow for this. Travel just makes it manifold easier to do this. It makes it easier to shut out the excuses and the distractions that come in the way otherwise.

I remember an evening in the mountains from a recent visit. Shifting continuously on rather prickly grass on step-fields, I looked ahead as the setting sun set the sky in gentle flames beyond the mountains; some of it reflecting off distant snow-capped mountain tops. The tinkling of a bell as a few cows grazed leisurely began to reach me clearer along with the breeze, heavily scented with the approach of rain. I began a quick-paced walk back to my tent as the breeze got stronger behind my back. And suddenly, it struck me that I could run. It sounds rather obvious but it hadn’t occurred to me and until that moment, I had been trying to gracefully walk. I broke into a crazy run, jumping along step-fields, crunching the grass beneath and running into a few cows still grazing as the rain caught up on us! And there I stood, soaking in the first few drops of rain with the cows and rather frantic birds before I broke into my wild running again. It was exhilarating!! To have so much open ground to keep up a good chase with the rain and to experience the sudden downpour threw me back into the highly intertwined web of the universe after a really long time. For the rest of my time in these mountains, I found myself breaking into a sprint at the slightest opportunity, and often for no reason at all – simply because there was a 360º freeway to do so! 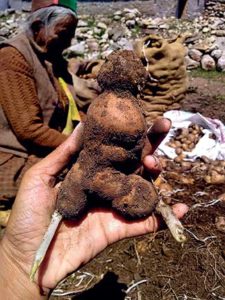 Another day, falling asleep in the morning sun in a rather secluded temple compound, I heard a muffled conversation in the distance. Looking over the compound wall, I saw two very old women in an open field; one sitting with mounds of potatoes around her and the other in a shallow pit picking out and adding to the mound of potatoes on the surface. My friend and I walked up to them and asked if we could help. They readily agreed. These were potatoes that had been harvested and stored underground over the cold winter. Over a few hours of chatting about mountain life and friendship, we sacked up about five huge sacks of potatoes. These would then be transported by the only bus that came to this village to the next big village where they would be sold or transported to further villages/towns. The two women, well into their 80s were friends from childhood. One of them was married and lived with her son and daughter-in-law; the other never married and lived by herself a little uphill from the field. We were invited to wash up and get a taste of the potatoes we had just helped stack. Houses here, all had an open courtyard of sorts to sit in, open to the sky and the fields or by-lanes around. One of the women got out a mortar and pestle; one could see that it had been used over the years from the smoothened edges. She crushed together a mix of chillies, dried herbs, raw onion and salt, making for an exquisitely flavourful paste which went perfectly with the bland boiled potatoes. Together, the four of us downed almost a cooker-full of potatoes! As neighbours walked by and stopped for a quick chat, they were presented with a handful of potatoes for the way. And so it was that we had a most beautiful morning of working with the land, sharing a meal and conversing with two incredible women.

Travel offers this – it offers one with an experience and one can choose to keep the essence of that long after the travel. A potato brings back memories; in cooking or eating it, I go back, if only for a moment, to the morning spent digging them out, covered in cold wet mud. Every now and again, I find myself taking a moment to share the present experience with life around me, be it a slight breeze or the warmth of an approaching winter sun. The routines of our lived everyday experience could benefit immensely when interspersed with frequent pockets of travel to places and people that don’t fall within the periphery of our everyday. It is a great wide world out there and there is plenty to experience and in the process, identify more deeply with the world within oneself.

The author has been working in the field of education as a teacher for four years. She is currently freelancing and working with children on socio-emotional skill development while indulging in making art, spending time in nature and reading leisurely. She can be reached at [email protected].