Lately, newspapers and the media are full of stories based on surveys (such as PISA and ASER) which continually point out the failure of our schools in ensuring basic reading, writing and numeracy skills amongst children, as well as speak of poor learning and the lack of learning with understanding. One can argue that such surveys only encourage us to look at solutions which are more performative than substantive. 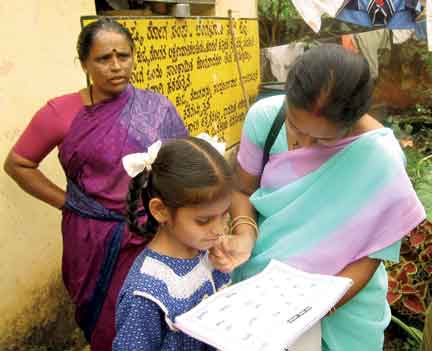 Let us elaborate on this by making two observations. First, the issue at hand is more about the cognitive and sociological aspects of learning than the economic dividends that good schooling and education is deemed and meant to deliver. One cannot but wonder if all the hullabaloo is merely due to the economic fallout of poor and deficient education. Second, while establishing appalling standards of learning, most surveys also suggest the lack of credibility of the centralized exams conducted by the state or by teachers themselves in schools. For example, the Tamil Nadu Matriculation class X exams. It is a well known fact that 95% of the questions asked are those which are exactly the same that appear at the end of each chapter in the board-prescribed textbook. Therefore, in many schools teachers coach students to memorize answers, and thus it is no wonder we have these wonderful pass percentages so proudly but thoughtlessly advertised both by government and private schools as an ‘achievement’. Also, the evaluation schemes and standards are so tweaked that students are awarded marks even for answers which can barely be recognized as pertinent and reflecting any clarity or understanding.

All these in one sense are ways of dealing with and resolving the problems posed by poor performances. It is for this reason perhaps that many private organizations conduct these surveys based on their independent assessments and further an increasing number of private schools are seeking affiliation with IGCSE, the British equivalent of CBSE, whose evaluation and certification is seen (but not necessarily ‘true’) to have greater value and credibility.

Teacher training
Thus, the acquisition of mere reading and writing and some basic mathematical ability as established through such dubious state exams could mean little. But literacy and learning with understanding, though certainly desirable, is an abstract and a slow process and its efficient ‘delivery’ depends on many variables. Teaching is one very important variable, a fact which several policies now recognize. But what value is attributed to teaching as a profession and what value are teachers seen to add to society? Not just in India but several studies in Europe and America as well have repeatedly highlighted, how teaching has been feminized and proletarianized. Given how we tend to view and regard both the working classes and women and the kind of low competency, low value work such groups are associated with, one can only imagine its implications in a domain as vital as teaching. Thus, seeking to train teachers with more ‘child centred’ and ‘experiential’ pedagogies without accounting for the larger social and cultural context in which the school teaching profession is embedded will be superficial and palliative at best.

Further, we need to ask if these surveys also factor in education as facilitating social and political consciousness? A recent survey by Wipro Applying Thought in Schools did include this aspect where it was shown, among other disturbing revelations, that it was quite all right for many kids if girls were not sent to schools and in their view immigrants and outsiders needed to conform to a state’s dominant culture. But notwithstanding this exception, all these surveys and their readings have to be appropriately contextualized and their epistemic premises unravelled to understand their full implications. For ‘poor’ ability in maths and science may mean bad news for an economy linked to the market where it can reduce their employability in a consumerism inducing service and manufacturing industry. However this lack, more than compensated by a greater social and political awareness ensured by schools can still engender a more harmonious and cohesive society and indeed development as well. The problem of course is that social and political awareness and consciousness is not prioritized in our schools.

True, inability to read, write and add up is not something that is merely about employability and is as relevant and equally important for raising the political and social consciousness of the masses, something that one is pleading for here. But the question is, apart from these skills of reading, writing and numeracy, children and even adults learn using their sensory-motor operations and the kind of cognition it facilitates, in manipulation of tools and objects which in domains such as farming, weaving, carpentry, lathe machine operations, masonry etc, lend themselves to a learning which is also enabling and productive. But these appear in our school curriculum merely as ‘extra’ and ‘something useful and productive’ at best but never as central and core to the curriculum. Our economy, while veering more and more to the services and indeed moving away from the secondary domain of manufacturing (not to speak of primary economies of agriculture) have rendered such skills and abilities non-remunerative and useless. And its effects are seen in our education and schools which are geared to cater to the needs of the new economy. 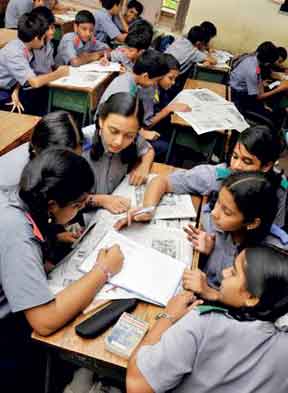 Curriculum intervention
In this regard what one would imagine to be more appropriate would be an educational intervention in the form of a curriculum, incorporating in part Paulo Friere’s and Mahatma Gandhi’s educational ideals and pedagogy. Such a curriculum needs to factor, contextualize and clarify the ramification of a student’s (and adult’s) existence, profession, role and status as they emerge in the given social relations whose explication can politically enlighten and empower-especially the oppressed and the dispossessed-in ways that do not inferiorize the latter’s cultural and economic milieu from which their identity emerges. Here education does not necessarily mean competition, class mobility and community escape but becomes empowering as it also invests it with possibilities of socio-economic change in contrast to ways in which our routinized educational system aligns merely with employment prospects and particular kind of employment at that, which in the discourse of common sense is seen as ‘liberation’.

At certain levels such a perspective may appear elitist and Brahmanical for it suggests and implies that people from the rural and labouring classes alone continue their toil and live on subsistence levels whereas kids of parents who benefit from working in services like IT and managements of fancy MNCs would go on to lead a life of perceived material comfort that the money working in such domains is seen to provide. Given the cultural capital that middle and upper class living presents and the economic opportunities available to these classes, such an educational prescription may continue to perpetuate the demographic divide. But let me provide two points to clarify my stand here.

First, poor academic record in itself does not preclude possibilities of criticality, social awareness and political consciousness. Second, even a sizeable percentage of upper and middle class kids despite the ostensible advantages embedded in their social milieu, perform better in domains other than what is considered to be purely academic and in realms which are perceived to provide ‘merely working class’ jobs. From my own experience as a school teacher in private schools catering to middle classes for more than 10 years, I would imagine many of them doing exceedingly well and better in domains of the ‘manualist’ blue collar than the more seemingly cerebral or ‘mentalist’ domains of engineering, medicine and management they aspire to or are compelled towards. Even the domain of arts, music and theatre, more present and accepted in our schools as the ‘co and extra curricular’, than farming or carpentry or weaving, is opted for by a small percentage of students. 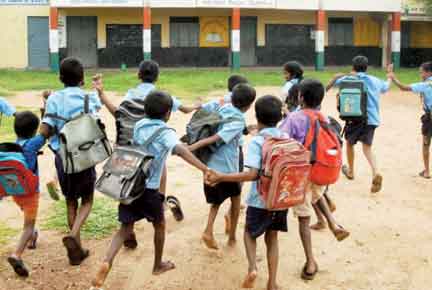 The fact is that apart from making such labour-intensive but perhaps less alienating vocations unattractive to potential takers, any physically demanding vocation is considered to be inferior, ordinary and useless in our perceptions, an illusion which is ironically perpetuated by our schools across economic divides. This affects the thinking of working classes as well, in whose aspirations only ‘good schooling’ – in the ways we popularly define schooling) seems to provide an escape from deprivation.

This then is another context that explains the pressure on children to ‘perform’ in domains considered acceptable, honourable and legitimate for a ‘better’ and ‘secure’ life of material comfort. Also seeking to measure the ability levels in the so called co-curricular domain, as CBSE’s CCE (continous and comprehensive evaluation) does and make a virtue of it reflects the absurd levels to which we are eager to quantify learning in domains as indeterminate as art, music or theatre, which are meant to awaken in us the innate sense of aesthetics and its appreciation. Such quantitative proclivities suggests our society’s obsession with seeking credentials and credentializing all domains of work and learning through certificates, diplomas and degrees facilitated by a rigid, time bound, inflexible curriculum which privileges certain forms of knowledge(s) and modes of knowing and learning in which a plethora and myriad forms of assessments and evaluations occupies pride of place. In all this we have to be a ‘success’ at all costs and every cost, anywhere and everywhere.

A new paradigm
The thing is the kids and more importantly their parents themselves need to be so ‘counselled’ to accept their child for who they are and the propensities they have. And, more fundamentally, it means the political economy that governs our society – where domains involving labour and physical inputs like farming which have been rendered uneconomical – needs to be suitably worked upon to become something we can call viable. In other words, we need to move to a new paradigm where rather than education being tailored to the economy, we look at models where economies are also tailored to suit the educational and cognitive/emotive needs and concerns of the masses. We seem to be anxious to build a society/nation that is competitive and is an world economic power based on its factories, IT companies and banking might but in the process, a majority of its people, both adults and children, fall behind due to perceived academic deficiencies.

Institutions like Bunker Roy’s Barefoot College come to mind. This initiative has, at several levels, laid before us the possibilities of non-structured and non-formalized schooling and learning. The ethos of the Barefoot College needs to inform our educational policies and forms a model which needs to be replicated across the country.

The author is currently pursuing research as a doctoral student at Jawaharlal Nehru University, New Delhi, exploring issues related to teacher identities and teacher mediation of textbooks. He can be reached at [email protected].