There is a moral panic about screen time today. Is it good or bad? What kind of screen time is positive and what may be detrimental? Is it right for certain states in India to ban online learning? How much screen time is recommended? What are the best practices and safeguards necessary for maintaining the physical and mental wellbeing of children during the virtual mode of learning?

Every generation faces disruptive technologies, yet why does today’s version seem like the end of civilization? It is not as though humans have not panicked before. Enlightenment, literacy, the industrial revolution – all brought fear and uncertainty to us but we managed to shift gears, metamorphosed and moved on.

Jean Twenge, psychology professor at San Diego State University and author of the book iGen, says this time is different because it’s “much more sudden and pronounced” than previous generational shifts. Tristan Harris, former design ethicist at Google opines that “This is about the war for attention and where that’s taking society.” The image being evoked is that of “a thousand engineers” on the other side of the screen, working on “persuasive design” to snare our young.

It may be true that more valuable memories can be created by spending time with friends and families. It is also feared that teens begin to lose the socializing skill with too much screen time. And then, there is Computer Vision Syndrome involving dry eyes, blurry vision, soreness and light sensitivity. On the other hand there are action video games that are considered good for hand-eye coordination. There is enough and more out there about harm reduction. Sit about 20 to 26 inches away from the screen. Dim the overhead light to reduce the glare. Get some sunshine and exercise. Take frequent breaks. But how about the Gen Z (born 1995 to 2015) many of whom feel their more authentic selves online?

The story of human civilization has followed a linear path. A truth surfaces, then science takes a while to catch up with it and the rest then fetch up having debated and angst and made peace with the new truth. And this newness is closer than we think it is.

Google’s Expedition App, an immersive teaching and learning tool is already here, a harbinger of the virtual reality lessons. There is a picture of the near future emerging Matrix like, bolstered with augmented reality, complete with 3D printed houses and robots for house companions. Delivery by drones, hyper loops for inter-city transportation, advanced prosthetics such as an arm with a built in flashlight, cybernetic implants for leg strength, exoskeleton suits that will make the wearer stronger, faster, taller, Spiderman suits, polymer gel leggings… mankind is inching up towards computer consciousness, the deep mind. There is no getting away from screens, in other words. 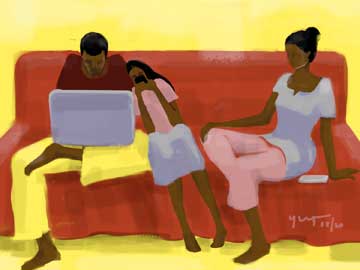 It is only the policy makers that stand between Cyborgs becoming a reality in 25 more years or less. We are currently living in a connected world; the spirit of information networks shapes our everyday experiences. The metaphor for our consciousness is the language of digital technology. Do we not say “hardwired” for empathetic connection? Why then are we conflicted about letting our kids move into the reality that we have already collectively fashioned? We want to be the gatekeepers to their progress. We forget Kahlil Gibran on chidren: For their souls dwell in the house of tomorrow, which you cannot visit, not even in your dreams. The future belongs to them.

Has childhood ever existed in a vacuum? There has never been a one size fits all, neutral version of the perfect developmental experience. The new generation grows up in context. It plays in ways that will count as preparation to participate in economies. Their mandate is to live productive and fulfilled lives within specific cultural norms. The onus on them is to construct their identity narratives using the tools of the time. The classic wooden toys for instance, grew out of Friedrich Fröbel’s 19th century kindergarten movement. The board games and stuffed animals were products of the Industrial Age. I grew up on the spinning top and clay dolls with nodding heads! These objects taught kids to see themselves in ways that aligned with the spirit of a particular time and place.

The question to ask the experts is, “What is the evidence against screens precisely?” Gaya Dowling, a researcher at the National Institutes of Health, USA used MRI brain scans to conclude that kids who engage in digital play for more than seven hours a day have thinning cortexes. This revelation was followed up with an ambivalent rider, “That’s typically thought to be a maturational process, so what we would expect to see later is happening a bit earlier.” That’s really the crux of the problem. Is such research really studying the kids or just the demographic statistics? Data has come to be used to manage behavioural outcomes. But kids are not just data points; their well-being would involve a more philosophical approach.

What is happening today is being likened to a “natural kind of uncontrolled experiment on the next generation”. There simply is not enough data to support any definite conclusion or warrant the fear mongering going on around us. And what there is of it is being subjected to the new principle of “statistics actually can change what you see.” The quality of the science used to determine whether or not screen time is good, the large data sets and statistical methods employed, the ethics of data sharing by researchers looking into the question may have allowed for anomalies to be claimed as significant conclusions.

As a matter of fact, smoking marijuana and being bullied were more closely linked with decreased wellbeing than was tech use; at the same time, getting enough sleep and regularly eating breakfast were more closely tied to positive feelings than screen time was to negative ones. Let’s hasten to clarify though that not finding a strong association doesn’t mean that screen time is healthy or safe for young people. Perhaps the risks are being balanced by huge rewards. A screen-related activity may be beneficial or harmful depending on who is doing it, how much they’re doing it, when they’re doing it and what they’re not doing instead.

Ask the kids, ‘What are you doing on the screen? What makes you feel good? What makes you feel bad?’ We may well find that the slightly negative effect of technology use isn’t as bad as say, having a single parent or needing to wear glasses. It is not our job as parents and teachers and concerned adults to protect them from an uncertain future. What we can do is to teach them how to apply the old human values – kindness, compassion, ethics, and etiquette – within the new technological contexts.

If the devil is in our smartphones, we needn’t worry; the instrument is projected to become extinct in 2025. The answer to the question therefore, of whether screen time is bad for kids is “It depends.” And that means figuring out “On what?”

The author is a former teacher/journalist, published author with a background and training in media, having worked in advertising, public relations, documentary film making, and feature journalism. She can be reached at neerja@neerjasingh.com and https://neerjasingh.com.