B Ramdas and Rama Shastry

As I write this the government has already begun to whittle down various aspects of the RtE Act under pressure from different sections, especially the elite private schools. A number of amendments are on the anvil to be passed in the monsoon session of the Parliament. As time goes it will get watered down to one more piece of beautiful legislation. 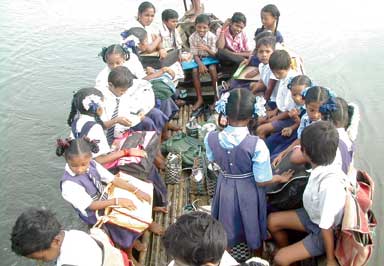 The fault lies in the fact that it was not thought through enough and so the mechanisms to implement it were never given serious consideration. After all, education is a state subject and so, any central legislation has to be finally worked out in a manner that can be implemented by the local governments. The states have begun to frame their rules. The emphasis appears to be on regulating private schools that are not recognized or if they are, to ensure that all the norms specified are fulfilled with regard to teacher qualification and infrastructure requirements. In fact, the Act has now put a lot more power in the hands of the authorities concerned. However, none of this has affected government schools where a majority of the children are studying, and failing, and dropping out.

As early as July 6, 2009, Dr. Pushpa Bharghava, then the Vice Chairman of the Knowldge Commission wrote to the Prime Minister expressing his apprehension about the way the Act was framed. To quote. “…The Bill ignores the historical fact that the decline in the standard and quality of government schools which were excellent till the late mid-1960s, started with commercialization of school education that led to the affluent sending their children to private commercial schools… The Bill will, de facto, open the gates for government subsidizing private profit-making schools for the rich and the affluent, instead of ensuring quality school education for all…. The 25 per cent reservation of seats in private commercial schools for poor children of the neighbourhood as provided in the Bill is, given the present situation in the country, bound to be a farce with only the school benefiting by the money from government towards their fees, and no benefit in return to those who need it most. There is no way that any existing provision can prevent this from happening…”

Vinod Raina underlined that the three conditions specified under the schedule in the Act viz: infrastructure, teacher qualification and government recognition cannot be waived and that they are required to be complied with by all schools.

Prof. R. Govinda of the National University of Education Planning and Administration (NUEPA), who was also involved with the framing of the Act, acknowledged that infrastructure could be a real issue and maybe there would be scope for case by case relaxation. He also said that, trying to dilute the need for teacher qualification could prove to be a Pandora’s Box. He pointed out that there was a five year window which could be used to influence the National Council for Teacher Education (NCTE) to come up with an innovative contextualized teacher education programme. In the area of curriculum and pedagogy, he felt that, there was a lot of freedom still, as long as one followed the basic State Curricular Framework. He was, however, wary of the idea of a National Council for Alternative Education and felt that a locally authenticated body would be more appropriate. He indicated that Alternative (M&I-meaningful and innovative) school stakeholders should engage with the process of formulation of RtE rules in their respective states.

It appears that some states like Bihar have just a handful of trained teachers. There is no way such states can staff their schools in the next five years without relaxing the norms.

It was suggested that educators should engage with the states to change the present confusion with the word curriculum which is often taken to mean syllabus, textbooks, etc. – and bring in the NCF notion of curriculum to ensure that schools can have greater freedom in use of content, pace of learning, etc. Our concern, however, is whether the local education official will be able to appreciate this. Would he or she have read the NCF?

Whether one can find space for innovation within the present system is doubtful. The likes of Tagore and Gandhi had the possibility of experimenting even during the British Raj. Today they would have to comply or shut down. Already such schools are being asked to conform or to stop enrolling new students. In a country as culturally and economically diverse as ours we need to have programmes that are creative and meaningful to these communities. After the meeting some of the representatives from the alternative schools had a discussion and have decided to create a platform for such schools called the India Forum for Innovative and Meaningful Education and to establish this need with the authorities.

Note: The National Commission for the Protection of Child Rights (NCPCR) has been given the task of monitoring and addressing grievances vis-à-vis the RtE Act. The Ministry of Human Resource Development has asked that a dedicated cell be created under NCPCR for monitoring RtE. (www.rtemonitoringcell.info).

The authors are with the Viswa Bharati Vidyodaya Trust, Gudalur. For queries on the RtE Act you can reach them at indiafime@gmail.com.