Do we really recognize inequality? Or are we so submerged in it that just like fish aren’t aware of the water they live in, we too have become immune to the environment of inequality we inhabit?

I hear you say ‘no’ in your heads. Of course you would know discrimination when you face it. Isn’t there a huge outcry against the violence that women are being subjected to across the country? Aren’t women more vocal about their rights now, than ever before?

Let’s look at ourselves – women teachers. Do we face forms of inequality or discrimination in our professional lives? The answer to this question you will say of course varies from individual to individual, school to school. But before you dismiss this question as ‘not applicable’ to yourself, let’s think harder about what are the possible manifestations of discrimination against women teachers: 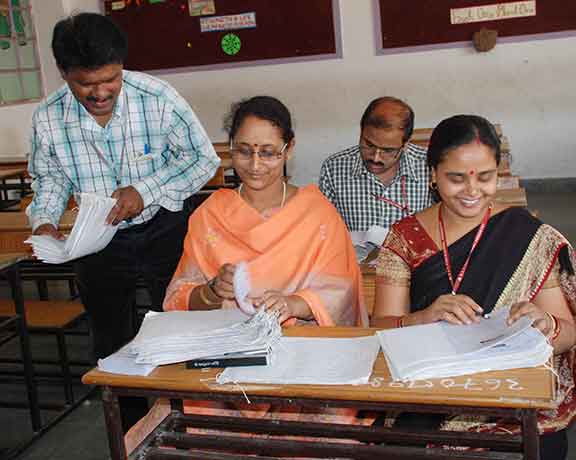 Not all of the above are necessarily true for all schools, but these realities exit in varying proportions across schools in our country. While a lot of attention is being paid right now at the policy level to the number of girls enrolled in schools, and a subsequent effort in increasing the number of female teachers, there is scant attention paid to the experiences of women teachers. However, what is of greater concern is, are teachers themselves observant of such trends and do they critique them? Let’s take up the first question raised – Do you notice how the primary sections of schools are populated by women teachers, and the number of male teachers increases the higher up you go?

Clarricoates (1981) quotes Irene Payne who stated, “the organization of the school ‘can show in microcosm the way that society is divided on the basis of gender: it can show the economic relations of gender’ so that the sexual division of labour replicates that of the larger society”. Clarricoates (1981) also talks about how in the professional hierarchy of the school, “women cluster at the base of the pyramid… [and] are seen more as child-minders rather than as “high status teachers”…” (p. 189). Of course, all of us know it is but obvious and ‘natural’ that women teach at the primary level!

The reality of Indian schools maps on to Clarricoates’ description quite neatly. The primary schools are populated by women teachers in both government as well as private schools. Recent Indian statistics suggest that it is the private schools which have a higher number of women teachers in comparison to government schools overall (http://unesdoc.unesco.org/images/0021/002122/212200e.pdf , http://en.wikipedia.org/wiki/Education_in_India). The government teachers have far more men working in middle and high school since the government pay scale is higher.

As a starting point, it is important to turn to feminist theory, which reveals how within patriarchal societies, women’s labour is in fact employed and exploited, but never acknowledged or compensated. This is particularly true for private schools, which do not have to follow the government pay scale, and pay extremely low salaries to teachers who put in a lot of time and effort into their work. Primary school teachers in fact put in extreme hard work in terms of the physical aids they prepare along with the emotional labour involved in looking after very young children, but are remunerated the most poorly. Is this because mostly it is women who choose to become primary school teachers? Or even because this level of schooling is seen somehow akin to “mothering” which is women’s “responsibility”? We must ask ourselves this question.

You might say, even if this is the case, and all of this is true – what can we do about it? The least we can do is to take cognizance of the reality that we have become immune to. We as teachers hold essentialist notions of gender and reinforce gender stereotypes by saying things like – “women are more caring”, or “they have the maternal instinct” and can hence look after younger children better than men. We need to analyze what we say and how we think – we must also remember that these are the notions we are passing on to our students consciously or otherwise.

Of the various ways in which the patriarchal set up of society affects our lived experiences, the relatively new space of private schools – both elite and otherwise – tend to be extremely exploitative of teachers’ labour. While many teachers complain about the low remuneration doled out, there is no understanding of this as a phenomenon whereby schools are trying to increase their profit out of the low teacher salaries they pay. Teachers’ unions do not really exist in the country (outside of the government system), and there are hardly any active fora for teachers as professionals to get together and discuss issues relevant to them.

This space aims to take up such issues and discuss them. This perhaps might be disturbing, but it is time that Indian teachers get a bit ruffled. The famous American philosopher Henry Giroux hopes for the teacher to become a ‘public intellectual’ – someone who can work towards the goal of social justice and equality. Well, as the cliché goes, charity begins at home. Perhaps women teachers in India could begin by taking a hard look at their reality and decide for themselves whether they would like to live like fish – oblivious of the water they live in, or like human beings who would like to fight for the cause of equality and justice – starting with themselves.

The author works in the field of education. She is doing her Masters in Education from Tata Institute of Social Sciences, Mumbai and is interested in the areas of gender, language learning, and teacher development. She can be reached at simranluthra@gmail.com.