Despite the prohibition on corporal punishment under legislative instruments, we continue to hear of many unfortunate instances of inhuman, degrading treatment meted out to young children as a form of correctional or disciplinary measure in schools. Apart from clearly violating a child’s rights, such punishments lead to depression, low self-esteem, anxiety, suicidal tendencies, and aggressive behaviour in children. Therefore, there is an urgent need for absolute prohibition of such disciplinary measures.

Degrading and inhuman forms of corporal punishment – contemporary cases
Corporal punishment is an everyday reality in India. How often have we not read about them in newspapers? Children in Visva-Bharati, Kolkata (Hindustan Times, Jul 09, 2012) made to drink their urine. A 14-year-old student in Perambalur, Tamil Nadu subjected to a similar punishment (Hindu July 21, 2012). In Anaparthy, Andhra Pradesh, a child of six years made to go through the same ordeal (First Post, Nov 23, 2012). Two school children tonsured for absenting from class by a leading school in Bangalore (Indian Express, 2nd February 2015). As many as 250 school children locked for hours without water or adequate space in Kerala for not paying the school fees (TNN, Feb 5, 2015).

Legal prohibition on corporal punishment
There are many legal safeguards seeking to protect children’s right to life, and their right to free and compulsory education between the ages of six and fourteen as enshrined under the Indian Constitution – Article 21, 21A of the Constitution respectively. The Directive Principles of State policy under Article 39(e) Article 39(f) mandates the nation to prevent abuse of tender age children, to ensure/promote/protect the right of children to develop in a healthy manner and in conditions of freedom and dignity and protection against exploitation.

National statutory provisions
In keeping with this constitutional laudable objective, there are specific statutory enactments, which strictly prohibit corporal punishment – ‘physical punishment’ and ‘mental harassment’ – under Section 17(1). Another important/significant statute titled the Commission for Protection of Child Rights Act 2005 (CPCR) Section 13 (c) provides for setting up of child commissions at both national and state levels. These commissions act as grievance redressal bodies that accept complaints related to violation of child rights including corporal punishment. They have also been vested with the necessary powers to inquire into a violation of child rights and recommend initiation of proceedings. The RTE Act under Section 32 (2), (3), (4) gives SCPCRs the appellate authority to receive appeals from a victimized child and refer such appeals to concerned higher authorities when the grievances are not redressed by the local authorities as mentioned under the Section. Thus, there is a harmonious reading of the RTE Act and NCPCR Act for effective check on the violations of children’s rights including corporal punishment. The National Commission for Protection of Child Rights (NCPCR) has issued Guidelines for Eliminating Corporal Punishment in Schools with suggested measures to control the same.

Landmark court judgments safeguarding children
The judiciary has laid down progressive judgments safeguarding the right of children to education, development, and prevention of corporal punishment in keeping with the constitutional, legal provisions of Indian legal instruments. In Unnikrishnan v. State of Andhra Pradesh, (1993) 1 SCC 645) and In M.C. Mehta v. State of Tamil Nadu & Ors, (1996) 6 SCC 756) the supreme court upheld the right of children to education up to 14 years of age and in another case, the Gujarat High Court, in Hasmukhbhai Gokaldas Shah v. State of Gujarat, (17 November 2008,) stated that “corporal punishment to child in present days is not recognized by law.” 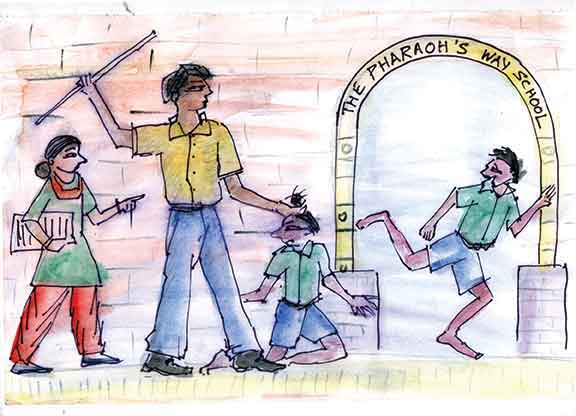 Criminal measures and punishments
Apart from the above specific statutes, there are criminal laws addressing such offences, which include within its ambit such acts of corporal punishment and also provides punishments for the same. The Indian Penal code 1860 under illustrated sections namely Criminal Force (section 350) Assault on criminal force with intent to dishonor a person (section 355), Punishment for assault or criminal force (section 352), provides for intentional use of force to any person against a person’s consent for causing injury, fear or annoyance to the person must be punished with imprisonment for a term which may extend to three months or fine extending to Rs. 500, or with both and in the latter category punishment is provided as imprisonment for two years, or with fine or both.

Suggested measures
In the face of all these varied national, international, legal provisions, judicial decision-making, there is a need for better and effective measure for controlling the menace of corporal punishments. Therefore, it is necessary that a greater awareness is generated among the teacher, school authorities, and school children about the available legal rights or entitlements, legal forum, legal instruments to protect the rights of children and prevent abusive or inhuman practice. There is a need for capacity building of children and empowering school authorities to enable them to address their grievances before the appropriate commission. Use of better harmonious methods of dispute resolution, psycho social counselling for students by the teachers are other measures that can be adopted. The NCPCR also recommends conducting periodic training programmes for developing better understanding among teachers and regular awareness programmes for teachers. The Commission has also proposed conducting an annual social audit on physical punishment, mental harassment, and discrimination which may be made accessible to the authorities, the parents and to civil society. It may be rightfully said that in the best interests of the child and the greater good of society such acts should be put to an end.

The author is pursuing her Ph.D at the National Law School of India University (NLSIU), Bangalore. She has done her LLM with specialization in human rights and holds a PG diploma in social work. She has been an assistant professor at the School of Law, TISS, Mumbai. She has gained research experience in child law while working at the Centre for child and Law, NLSIU. She can be reached at [email protected].