India’s education system, perhaps not unlike elsewhere in the world, has thrown up various questions over time. A key question has been if the schooling in India prepares children for the world of today. The Programme for International Student Assessment (PISA) is a test that is conducted every four years by the OECD (Organisation for Economic Co-operation and Development), in which 15 year-old students are assessed for real world application of their learning. India was one of the participants in the year 2009 and was ranked 72 out of 73 countries. Although the aims of all tests and results can be debated, the results of the PISA test forced educators in India to introspect if our education system was preparing our children for a world that didn’t exist.

The progress that India has made in high enrolment of students, its economic success in the recent past and a few achievements by global Indians becoming heads of multinational corporations overshadow the poor quality of education generally imparted in schools that millions of students attend. The magnitude of the problem can be daunting and it’s at such times, that localized examples can help us uncover what works. 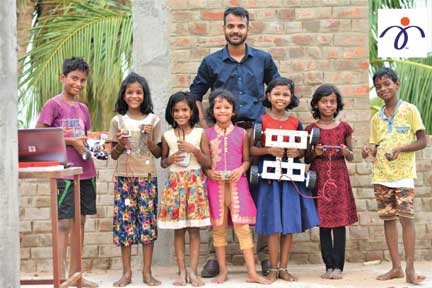 Navonmesh Prasar is one such example that is widely covered by the digital and print media for its role in helping improve education in rural Orissa. The Internet is full of praise for Anil Pradhan who started Navonmesh Prasar in 42 Mouza, a cluster of villages in Orissa. Pradhan, who is a civil engineer by qualification, and was employed by corporations in cities, returned to his village to make a change in the lives of rural children. The idea of returning to one’s village and starting a school that focuses on innovation can be revolutionary. In an email exchange, Pradhan shared about the work that is being done by Navonmesh Prasar, the place for a humanities education in a school that focuses on science, the education of girls and finally how the school has been able to innovate for itself during the pandemic.

Pradhan and Navonmesh Prasar
Anil Pradhan grew up in Baral village of 42 Mouza and had to make the long commute to Cuttack for his education. On completing his schooling, Pradhan enrolled in an engineering course and spent his time in the robotics society. The learning environment enabled Pradhan to be part of a team that created a satellite that could monitor the large Hirakud Dam and try his hands at other robotic creations. Pradhan says that this inclination to take apart machines and appliances and rebuild them existed when he was a child and was strengthened during his college years and early career. It is this passion that he now wants to pass on to students in the village of Baral through the International Public School for Rural Innovation (IPSRI), co-founding Navonmesh Prasar School for Innovative Learning (NaPSIL) with Vaishali Sharma, setting up maker labs and conducting training programmes for other educators. All these initiatives are conducted through the vision of Navonmesh Prasar Foundation whose aim is to instil a love for innovation and scientific thinking in students. Pradhan says, “I was born in a remote village where the education I received was not up to the mark as per my parents and thus they shifted to an urban place so that I can receive quality education. After 12 years, when we returned to our native place, I found the education quality was pretty much the same as what I have left before. Hence, I really wanted to do something to improve the situation of my place.” Just like one of the educational programmes teaches children in IPSRI to take apart machines to learn how to bring them together, Pradhan’s living away from his village for 12 years brought him closer to the problems of the students of his village. Pradhan has been likened to the character of Rancho from the movie, Three Idiots because of his return to his village to transform education there. Pradhan has received several accolades from the government and serves as a mentor on various government education projects.

Complex social problems and science education
Several programmes are conducted in IPSRI like those that use waste to innovate, understanding electricity through the use of machines and also self-directed learning through taking apart appliances and putting them together. Pradhan believes that school equips the students to solve real-life problems through science, technology and innovation. However, societal problems are not solely a result of a lack of science or technological advances but are complex issues steeped in a history of injustice, exploitation and greed. Plenty of examples exist where effective scientific innovations cannot be implemented because of a lack of political will. Climate change, another example, is a result of several years of exploitative economic activity that ignored the destruction of the planet. How does IPSRI provide students an understanding of the social contexts where the scientific and technological solutions can enhance all lives equitably? Pradhan states that the school teaches students, holistically, through practically involving students in value-based activities. Students are taught about cleanliness, for example, by keeping their surroundings clean. They are taught about reducing plastic waste by reusing plastic containers to grow plants or making bottle bricks for innovative construction. Through the email exchange it was not clear if social studies are taught with the same enthusiasm as science and technology although Pradhan shared that keeping experiential learning in mind, the school welcomes students from different castes, genders and economic backgrounds and such intermingling has the potential to contribute to greater understanding of people who are very different from us. Pradhan stresses that as an institution, they make sure that there is no sense of superiority or inferiority among students in any way.

Gender, science and technology
Navonmesh Prasar’s focus on science and technology prompted another question. Science and technology is plagued by another problem – of it being male dominated. Numerous studies have shown that girls’ proficiency in science and technology is underestimated leading to the current crisis where jobs in technology have few women. Along with the overarching problem of shortage of workforce, because of the lack of women’s participation, other social issues such as safety and consent are problems that technology users are beset by. Schools are often the first place where girls are left out of science conversations either through a lack of role models or simply the bias that science is not for girls. This was indeed a problem faced by Pradhan earlier. He says, “When we started in 2015, I would be lying if I say that it was really easy and smooth to enrol girls. We faced challenges in terms of convincing the communities and parents to send their daughter to school, especially to a school where we taught them to use a 3D printer, CNC Laser Cutter, drilling machines, welding machines, soldering irons, and other mechanical tools and equipment.” Going deeper, Pradhan points out, “There are these social norms that prevent girls from receiving this kind of education, or taking on jobs that are perceived fit for men. Several girls have already dropped out of normal school and that raised a big challenge for us to make girls and communities aware of education and skill development.” Today, IPSRI’s total student community has 60 per cent girls. In fact, Sharma, the co-founder of NaPSIL, a new school of Navonmesh Prasar, has prioritized seats for girl students.

The pandemic and the school’s innovation for itself
The lockdown during the pandemic has exacerbated the problem of accessibility of education. Reports by various agencies and civil society organizations have revealed that girls are the hardest hit because of the lack of gadgets they can use for their online classes. IPSRI has been able to overcome this problem because they adopted tab-based learning even before the pandemic. These tabs are now useful in these times and students’ familiarity with the devices has allowed for reduced interruptions in attainment.

To return to our question about quality of education and the daunting challenge of educational equity, Navonmesh Prasar, seems to be demonstrating how localized initiatives can be the revolutionary answers to some of the bigger questions. Pradhan’s deepest belief is that education is a gift that should not be a burden but should be spread and multiplied, which he does through Navonmesh Prasar.

The author is the co-founder of InteGRAL, a gender focused research firm based in Asia. She can be reached at fiona.vaz@gmail.com.