I am part of a small community learning space for children called ‘A Little Grove’. Currently we are a group of 20 children, the youngest being a four year-old and the oldest 19. At ‘A Little Grove’ we attempt to create a small space, where children are free to explore their own interests and concerns, free to discover their meaning of life. It is an attempt to create a democratic learning and living space for children wherein different ways of knowing and learning are not only respected but also encouraged. Children not only decide what they wish to do in the space but also take part in deciding how the centre functions. Each child is unique; hence we do not follow any fixed curriculum. Everyone here is encouraged to follow their heart and carve out a curriculum and time-table for themselves.

In many ways the space is a lot different from a regular school. However, one thing I particularly like is how, because we do not have classes, children of mixed age groups can be seen working, learning and living together. When I was in school, I had spent most of my time with children from my age group. Hardly would I get to be with those younger or older than me. I would attend classes with children who belonged to my age group, play with them and also have lunch only with them. How mixed age group children learn with each other is something that I would like to particularly touch upon when we are discussing the need of counsellors in schools. 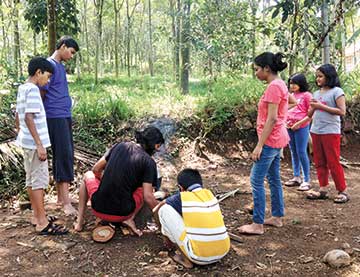 In a situation wherein children of mixed age group spend time together, learn and live together, we get to observe a lot of interesting things happening. We see children of different ages having food together, playing together. Frequently we get to see how the older children take care of the younger ones, teach them some things that they need to learn and how the younger ones invariably go to them whenever they are stuck with something.

I particularly remember one such instance. We all had gone out for a walk into a nearby forest. We had walked to a place with a small pond and lots of trees around. The children were playing. Some of them sat down to do their drawings. It was almost time to go when a four year-old came to me and said that he had soiled his pants. I did not know what to do. Back at the centre, an akka who worked with the younger children helped in such situations. She was not there with us that day. I thought I would take the kid back to the centre and get him cleaned there. Just when I was about to pick him up, an eight year-old girl came and asked if there was any problem. I explained the situation to her. She immediately took charge and asked me to get water from a nearby pond. Within no time she had washed the child and his pants. All through this exercise I was merely observing her. This happened three years ago but the incident is still fresh in my mind. A number of times we get to see how, without being told to, children take care of each other. The older kids easily assume the role of an older brother or sister to the younger ones. The younger ones feel like they are taken care of.

Around four years ago, a student came to our centre. He was a little different so no school would take him. He had the habit of copying everyone around him, talking to himself and so children from his class would make fun of him. After he joined our centre, for a month, I tried finding ways to engage with him, trying to understand him more. However, I was not able to build a relationship. Then one day when I was struggling with him, trying to get him to colour something, two older girls came to me and said that I was not giving him the right thing to do. It was when they were playing with him that they discovered that he has this wonderful talent for making intricate drawings. He could draw things from his memory. For instance, a temple he had visited and sketch it just like he had seen it. Ever since, he has been enjoying discovering his talent; making beautiful pictures. It was not that children did not make fun of him at the centre. They did. Some new children who come still do. However, I saw that some others, mostly older children, once in a while, intervene and try to make them understand how he is a little different and needs to be taken care of. Four years ago, when my grandfather passed away, I went to my village and spent about a month living with my grandmother. There are two things I noticed. All through the time I was there, not for a moment was my grandmother alone. She always had people of different age groups with her, her friends, from all over the village sitting with her and listening to her. They would finish their work early in the morning, and then come and spend the whole day with my grandmother, telling her stories, not allowing her to feel low for even a single moment. Children would be around her playing with her. I saw that she was taken care of. She had a community of people to support her, take care of her. The second thing that I noticed was this deaf and dumb friend of my father and uncles, our neighbour. I saw how my uncles were communicating with him in sign language. I asked them, “When and from where did you learn sign language?” They did not have an answer. After sometime they told me, “Well he is just like our brother. We grew up playing together. And we learnt.” He too, was not alone but part of a community wherein he felt no different. 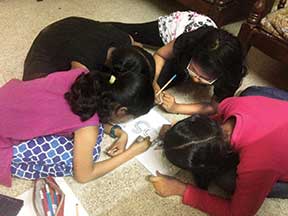 The reason I draw a parallel between what I saw in my village and in the centre is that both suggest that we all are interdependent, that we all need each other young and old, poor and rich, people of all different kinds to learn, live and grow with. It tells us how we should be working towards a more inclusive society, a society that brings people of different kinds together. The moments that you spend with a younger person who needs help with something, an autistic or a physically impaired child who is so different and yet special in her own way, you learn so much more about yourself and connect with the compassion within. Today, however, we are trying to segregate people into boxes. We put children of the same age group together in a classroom. We have a separate school for the blind, for the deaf and dumb, for autistic, for anyone who is a little different from our definition of normal. By doing all this, I believe, we create a very unnatural world. In this segregated world we take away from the child an opportunity to learn how to be truly caring, compassionate towards others, an opportunity to understand that every being is unique and special in his or her own way. It is in these situations, I believe we tend to rely more on help from special professionals like counsellors and psychiatrists to sort out things that we have messed up. In no way do I mean to undermine the role counsellors and psychiatrists play. They help heal what is broken, try to devise ways to help children reconnect with peace within.

The more we try to work towards an environment that helps our children grow into nurturing, loving and happy people, the less would we need to rely on counselling sessions. Helena Norberg Hodge, director of Economics of Happiness, spent many years living in small communities in Ladakh. She writes, “I saw that even among young people there wasn’t a need to show off, to act ‘cool’… I remember being impressed that a 13-year-old boy wouldn’t feel embarrassed to coo over a little baby or to hold hands with his mother and grandmother and share stories. Economics of Happiness for me is all about restoring human connections… connections that today are broken and about caring and loving each other.”

We have to ask ourselves whether we are able to find a nurturing, loving and caring environment in our schools today. We can further question whether in the current schooling system, where all children of similar age groups are put together in a class, is it even possible to create such an environment? If not, then we will always be in need of counsellors and psychiatrists to help our children in whatever ways they can.

The author is part of a community learning centre called ‘A Little Grove’. He sometimes writes here www.earthisnotround.wordpress.com. He can be reached at 27amitd@gmail.com.