When I was on a Peace and Conflict Studies fellowship in 2013, I often found myself bewildered by the term ‘conflict zones’. The tendency to reduce certain parts of the world to the conflicts they were struggling with seemed to deny people and communities the other human experiences their lives were filled with.

I could also glean a sense of condescension coming from the view that there are two kinds of countries – those with conditions of conflict, and those with conditions of peace; the former belonging to the so-called third world. In peddling this simplistic distinction, something crucial was being erased – the role of nations in stirring up conflict in regions other than their own.

Also, while it is easy to spot conflict in Palestine or Afghanistan, it can be difficult to notice in Sweden or the United States if one is using the same measures or indicators. Conflict is everywhere. Really.

What do we mean by ‘conflict’? I often find it useful to invite responses from students instead of giving them a definition that works for me. In this case, I would frame the question, “When you hear the word ‘conflict’, what are the various things that come to your mind?” I would ask each student to give me just one word, and put up all of those on the board for the entire class to reflect on.

The list created by the students might feature some, most, all or none of these words. They would bring to the activity what they have experienced, read, heard or observed. I would not be surprised if the same activity led to many different kinds of lists in diverse contexts, depending on region, age group, and other factors. Though the experience of conflict is universal, its specific manifestations in the lives of people are likely to vary. The nature of each conflict is determined by the needs, actions and perspectives of the stakeholders or the parties involved.

It might be a good idea to ask students why they decided to contribute a particular word. The reasons they share would help construct a picture of what makes them think of conflicts in a certain way. They would also benefit from listening to each other, and understanding what informs the thinking of their classmates.

Unfortunately, a lot of the literature on the theme of conflict is from adult perspectives. It is difficult to come across published material that foregrounds children’s voices. Children suffer immensely in situations of conflict, and it is vital that we support them to share their voices.

Here are some insightful expressions from children around the world. Their words need to be invited into classrooms that discuss conflict. 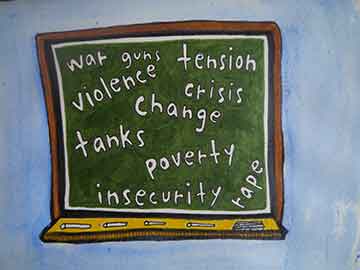 “I don’t believe that the big men, the politicians and the capitalists alone are guilty of the war. Oh, no, the little man is just as keen, otherwise the people of the world would have risen in revolt long ago! There is an urge and rage in people to destroy, to kill, to murder, and until all mankind, without exception, undergoes a great change, wars will be waged, everything that has been built up, cultivated and grown, will be destroyed and disfigured, after which mankind will have to begin all over again.” – Anne Frank

“The winter was incredibly cold, and we could not see any way out of the war. It was also terrible to hope for cease-fires and be happy whenever we heard of peace agreements being signed, and then feeling that terrible disappointment when they were broken. Nothing worse than hope being brought up and then have it crash down.” – Zlata Filipovic

“Dear Mr. Andropov, my name is Samantha Smith. I am ten years old. Congratulations on your new job. I have been worrying about Russia and the United States getting into a nuclear war. Are you going to vote to have a war or not? If you aren’t please tell me how you are going to help to not have a war. This question you do not have to answer, but I would like to know why you want to conquer the world or at least our country. God made the world for us to live together in peace and not to fight.” – Samantha Smith

It might be valuable to get students to do some background research about the children these quotes are attributed to. Some examples of guiding questions are: Which country is this child from? In what circumstances did she say or write those words? How did she personally experience the conflict? One quote can become the starting point of an exciting journey to explore how children live in another city, country or continent.

Since the experience of conflict is universal, it is essential to remember that we cannot be teaching about wars, structural inequalities, and civil unrest, and not engaging with conflicts in the classroom, the staff room, the playground, the school bus, and other spaces connected to school. These conflicts might not involve missiles or hand grenades but they are conflicts nonetheless. These spaces do often involve physical, structural and cultural violence, and it would be foolhardy not to acknowledge the same.

A school has several stakeholders, and each one experiences conflict in relation to other stakeholders, regardless of whether they are students, teachers, parents, counsellors, heads of department, janitors, administrative staff, trustees, etc.

Newspapers, magazines and online publications feature reports and articles about conflicts in schools. Some of these could be brought to class, and students could be asked to read and find answers to the following questions: Who are the stakeholders in each conflict? What are the needs or values they consider important? What is their perspective on the conflict? How do they act in response to the conflict? Does this response acknowledge and/or fulfill the needs of all stakeholders? Which stakeholder do you empathize with the most, and why? How would you respond to the conflict if you were in that stakeholder’s position?

Here are six pieces that teachers could use for this discussion.

Many of us have not been brought up to recognize and express our needs, so it may be difficult to name needs in the above situations. What I have found immensely useful is the downloadable deck of Needs cards (http://www.opencommunication.org/NeedsCard.pdf), which I was introduced to by Peggy Smith, a certified Non Violent Communication trainer from Maine, who was one of my dialogue facilitators at the International Seeds of Peace Camp in the United States in August 2014. 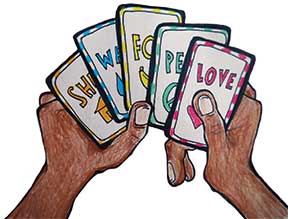 The deck can be downloaded and copies can be made, or students could be encouraged to make their own decks using paper that is sturdy and can last for a while. The deck also includes some blank cards so that people can keep adding to their needs/values vocabulary.

Conflict is not something that happens outside of individuals. It is something that gnaws at us from within. It brings up lots of different kinds of feelings. Sometimes, we can feel something happening but we are not fully aware of what it means to us. The Open Communication website also makes available a downloadable deck of Feelings cards.

It can be difficult to appreciate the significance of a Needs and Feelings vocabulary because it seems to be all about language, and not about conflict. In fact, language is deeply connected to conflict. Identities are expressed through language. Demands are made using language. Naming, shaming and blaming are all done with the help of language. Similarly, we can also use language to articulate what matters to us. We can employ it to bridge barriers and seek solutions.

We cannot escape conflict but we can learn how to respond to it in ways that do not involve violence – to ourselves and to others. When we learn to acknowledge and express our own needs and feelings in healthy ways, we can become more open to understanding the needs and feelings of others. We may not agree with them but we can hear where they are coming from. That is a major accomplishment. It may not resolve the conflict but at least transform our understanding of it.

There are some beautiful songs that build on the themes of communication, dialogue and empathy. It would be wonderful to sing them along with the students, reflect on the lyrics, and journal about how the lines connect with our own experience. My favourite among these songs is ‘Walk A Mile in Another Man’s Moccasins’ by David Mills. I learnt this one at Asia Plateau’s Making Democracy Real gathering in Panchgani in January 2014. The words are given below:
“Walk a mile in another man’s moccasins,
Walk a while in another man’s shoes,
Before you leave him condemned forever
Put on his boots there’s nothing to lose;
Live a day with another man’s family,
Live a day by another man’s side –
Years of hurt can end and a foe become a friend
As you find that he is just the same as you inside.”

This song puts me in an introspective mood every time I hear it sung. It reminds me that difference or diversity, by itself, is not a problem. It becomes one because of how it is viewed and engaged with. This song also makes me realize that conflict is not something to run away from. It may hold some very important lessons.

The author conducts workshops focused on creative writing and education for peace. He is the founder of People in Education and Friendships Across Borders: Aao Dosti Karein. He can be reached at chintan.backups@gmail.com. Visit www.facebook.com/fabaaodostikarein.

The disruptive child
Breaking it right
All knotted up inside
Barriers within build barriers without
Identify, listen and empathise