I had this beautiful idea – celebrating diversity in our traditions. All students were nicely sharing something they did to celebrate their festivals. “We eat modaks on Ganesh chaturthi.” “We are poor but we always get new clothes on Id.” “I help my parents cook langar on festivals and some holidays.” “We share sweets with all our neighbours.” “My mother makes the most amazing dhansak.” “Our neighbours love the sheer khurma (seviyan kheer) my father makes.” “So you people eat vegetarian food also?” “Yeah yeah, and you people pray to stones na.”…

Then it was total chaos. One nasty jibe after another, one insult after another. Rather than celebration of diversity, it became celebration of intolerance and hatred. I did not imagine there could be so much prejudice in those little children. I screamed, “Shut up! Everybody shut up! Class is over,” and ran out of the class. I tried to look angry so that they would not see me crying.

Celebrating diversity indeed! As if by calling all differences as diversity, everything automatically becomes good. We conveniently use examples of differences that are beautiful and heart-warming: clothes people wear, languages they speak, work people do like woodwork, cattle herding, repairing motorbikes, farming, post offices. This will help children understand diversity and learn social studies also. Yeah! Try doing that in a class.

Some people worship idols, others consider all material things divine, some claim it is sacrilegious to represent God in any form. Some believe there is no God or Divine. I am lying if I say all religions are fundamentally the same, or there is unity in diversity. There isn’t! If I believe God should not be represented in any material form, idol worship is sacrilegious. If I am vegetarian, eating meat is immoral.

I was not able to deal with so much intolerance. How I shouted! How I walked out of the class! I have never done this in my entire teaching career. What could I do? There is no way these two belief systems will reconcile with each other.

Oh no! What am I saying! I am democratic. I respect people from all religions, all cultures, all traditions. How can I say these two cultures will not reconcile with each other? Surely, they agree on so many things. He said, “You eat vegetarian too!” so sarcastically, but he loves seviyan kheer. I remember he ate so much kheer during Ramzan. The other boy goes with his friends to the temple and even holds their bags when they are inside praying. He does not pray to idols, but he does not mind other people praying. What happened to them today?

There are many common values shared by different religions. God exists and we worship God. If they agree on that, then how each of them represents God, how they pray is less important.

Aah one problem is when they see one practice, they forget other beliefs that the same person holds. Worshipping idols is one practice in their belief system. There are so many other beliefs that this guy completely agrees with. In fact, he practices those same things himself. Praying to God, for example. That is common to both belief systems. They only use different methods of praying.

What about atheists then! They do not pray, but they do not stop others from praying. They respect the other person as a human being. So, respecting other human beings is a value common to all cultures and belief systems.

However, this is not enough. Let me draw a Venn diagram. Groups of people share a common belief system. Each belief system has many traditions and practices. These practices are based on some fundamental values. There are many values that are common to all belief systems. Wait a minute. Are these fundamental values common to all belief systems in a society? Maybe not. But if there aren’t any common values, how will they live in the same society? If they accept that they are part of the same society, they have some common values. At least they have one value: solidarity.

But there should be reasons to have a feeling of solidarity. What could they be? Respecting other human beings is definitely necessary. That means if anyone disrespects or causes harm to other humans, it is injustice. Therefore, a common definition of justice is necessary too. Wow! Am I thinking like John Rawls! Yeah, I am repeating his ideas. What was that term? Overlapping Consensus. Even if different groups of people have different belief systems, there have to be some common values and a common definition of justice. This is what he means by overlapping consensus, without which he says a democratic society cannot be. 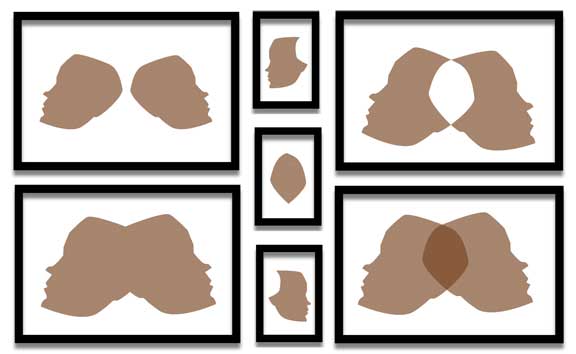 He uses a different term for diversity. He calls it “reasonable value pluralism”. Plural. Aah he says there are many value systems, not just one. Diversity immediately brings differences to our mind. Whereas, plural is only understood as ‘more than one.’ He qualifies ‘plural’ with an important adjective: reasonable. It means everyone should have reasons for holding some values and they should be reasonable, i.e., we should be able to reason with them. They will have a reason, reason(s) they think any human being would accept.

This Venn diagram is very restrictive. It seems to impose some values on everyone. Should I imagine it as a spectrum of values? But this will not work. In a spectrum, even though the difference between values is blurred, it does not show what will bind everyone together. Everyone should accept some fundamental values, as we need overlapping consensus and agreement on some principles of justice.

So, what do I have now? Value pluralism, reasonable but differing values and common accepted values. So pluralism is bounded. Everyone has to accept some fundamental values. They can have any other values they want, except something that goes against the fundamental values. If any belief system has a practice that violates fundamental values, then they are wrong. We should be able to say, “You are wrong, and you have to stop this practice.” But how would that happen? We first ask them for reasons why they have that practice. They give reasons, which will help everyone decide if they are right or wrong. We have to evaluate practices using fundamental values accepted by everyone. For example, if their practice disrespects some people – a particular caste, or some religion, or some gender – then we can say, “We are Indian and this practice is against the fundamental values that Indian society holds.” These common values are in the Constitution of India.

Aah but everything is not right or wrong. There is the grey area called tolerable! What is ‘tolerable’? Tolerance means we don’t agree but we are OK with others doing it! Tolerance has a negative aspect and positive aspect. I have moral reasons for objecting to a practice, but it is immoral of me to reject or stop others from doing that. For moral reasons, I should accept an immoral practice! But that is paradoxical! How can I be moral and immoral at the same time! I should have acknowledged and accepted that the student who criticized meat-eating, was morally offended. If I do not do that, I am being unjust. At the same time, I have to acknowledge that the other boy is morally offended by idol-worship. I only saw intolerance and I was too busy criticizing the intolerance.

Why do we need this category called tolerable? To make sure we do not feel forced to accept all differing values, we have to check their tolerance level. If any practice violates individual autonomy, disrespects some individual(s), does not follow the accepted common principle of justice in our society, then they are not tolerable. Eating meat, idol worship, atheism are tolerable. Why? Fundamental values again: respect others’ right to freedom in the way they want to live.

Teaching tolerance
It is all so clear to me now, but why couldn’t I manage today’s class properly? The way I reacted, I encouraged the intolerance and hatred, rather than encouraging them to think. They could see that I felt, “You are not reasonable. You are intolerant.” I was being intolerant of intolerance; because my mind was made up already.

They did not even pause and ask why he worshipped idols, or why they eat meat when they can eat seviyan kheer. Both of them came from a dogmatic stance. My belief system is right, and I will judge your beliefs and practices based on my belief system. But a dogmatic stance makes the “other” completely different from “me”, sometimes even reduces the “other” to lesser than “me”. Then there is no possibility of dialogue, leave alone reflection or reconciliation.

I wish they had completely agreed with the other belief system, even if it made their own belief system seem inferior. No! This is the opposite of dogmatic, but equally problematic. Respecting someone else should not mean disrespecting myself. At the same time, they should not adopt a shallow, “sab chalta hai” (anything is fine) attitude. How do we solve this situation?

They should be seeing controversial practices from an independent viewpoint. Rawls calls this the Original Position. When we are dealing with justice, we should not see who the person is, what belief system he is from, what belief system I come from. We should imagine that we do not have an opinion about the situation. He calls this adopting the Veil of Ignorance. This is required for at least two reasons. One obvious reason is for us to be unbiased. Secondly, agreement or opposition should be an autonomous decision. We have to consider others autonomous too. Rawls says we should consider everyone as free and equal, properly informed and reasonable. If we have that attitude, the most obvious thing to do is to respectfully ask the ‘why question’.

I should think hard before I do activities like this in class. First of all, I have to adopt a neutral viewpoint in my mind, as if I don’t know what is right and what is wrong. This should be seen and heard in the look on my face and the tone of my voice and my body language. The most important thing is to create an environment where everyone has a sense of solidarity and everyone thinks of themselves and others as reasonable and rational. That is my job as a teacher. In a classroom everyone should feel empowered to speak their mind, without worrying about opposition or ridicule. Only then should I get into contentious issues like value diversity…oops value pluralism!

References
• “Toleration in Conflict: Past and Present” by Rainer Forst
• “Justice as Fairness” by John Rawls

The author teaches Philosophy of Education at Azim Premji University. He can be reached at <[email protected].