Every year, on the first of February, the Finance Minister of India presents an account of the proposed expenditure and expected revenue of the government to the entire country. Several articles on the Union Budget, as it is called, are then published in the newspapers primarily by economists and business journalists. However, we strongly believe that more of us ought to engage with this exercise by the government, and especially those of us who are teachers. The Gross Domestic Product (GDP) is an outcome of social processes and therefore its allocation to various sectors is a matter of social accounting, as it were. 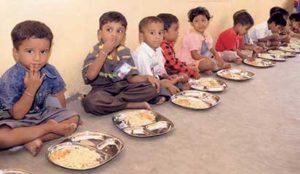 A close engagement with the Union Budget tells us the importance our government ascribes to education vis-à-vis defence, physical infrastructure like roads and trains, etc. It also gives us an indication of how much the government wishes to spend on: school education relative to higher education, mid-day meals relative to scholarships, teacher training relative to teacher salaries, and infrastructure relative to recurring payments (for electricity, power, water, and so on). This information, in turn, helps the general public as well as the teachers in government and government-aided schools and colleges to assess the extent of support, or mostly, the lack of it, for public education by the government.

The rationale for public education
Since the question of provisioning falls within the ambit of economics, let us briefly examine the two dominant answers. One group argues that since education is like any other commodity (oranges, toothpaste, etc.), its provisioning is best done by the market. The other group argues that education is a public good and therefore the market will ‘fail’ in its pricing as well as production, and hence, education should be provided by the government.

The public good argument also gives primacy to the market; the argument is that since the market fails, let us ask the government to provide education. Can we think of the provisioning differently? If education is to be accessible for all, the cost must be such that it is accessible to an unskilled worker who earns minimum wages. As a matter of fact, Adam Smith, contrary to the popular opinion, argued that the cost of education should be such that even a ‘common labourer’ can afford it (see Thomas 2019).

Of course, this is not to imply that the government, without proper democratic and decentralized consultations, should decide the contents of the curriculum. After all, if education is partly about understanding power and institutions, questions will necessarily be posed about both the historical and contemporary workings of not just the ‘market’ but also the ‘government’. In a way, education ought to provide us with the means to understand and question the status quo.

Seeking profits is a central characteristic of profit-maximizing firms. Should education be supplied by profit-maximizing firms? No, because they price education in such a way that the poorer sections are unable to access it; this is perhaps especially true of the ‘international’ schools today. Another route is perhaps by limiting the quantity of education because it is not profit-making for private schools to expand capacity beyond a certain point. The latter route could also be to ensure that only children of certain castes and classes access the education they provide.

Finally, since education (both secondary and higher) is important for intergenerational mobility, in a caste-based society like India, those we elect to govern us must ensure not just universal access to education but also its quality. Historically, education was denied to the lower castes and women. In 1848, Jotirao and Savitribai Phule, both from backward castes, opened a school for women because they, like others from their community, could not access education. And given the persistence of such exclusion in various ways until today, children from lower castes face significant hurdles in accessing school education, and girls find it difficult to pursue higher education. While public education has helped reduce such exclusion, there is a long way to go in terms of education being ‘inclusive’ in the classroom and the curriculum.

Our expenditure on public education
As is to be expected, countries which recognize the fundamental importance of education, spend adequately on education infrastructure, teacher salaries, teacher training, and so on. However, there is no magic number – X per cent of the GDP or total budgeted expenditure – that we can adopt from countries such as Bangladesh or Finland because our needs are different and varies with time. Instead, the number should be arrived at by looking at per child expenditure and the number of children which varies across the different states and Union Territories (UTs) depending on the existing school infrastructure and the long term vision. 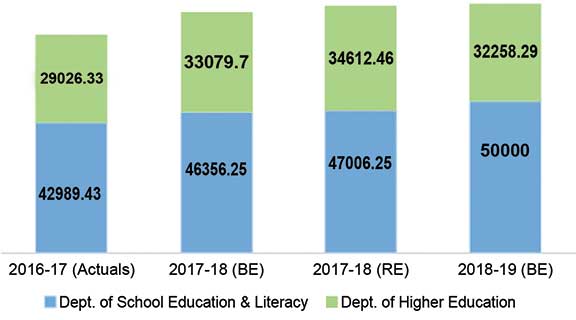 Just like taxation reflects our collective socioeconomic vision, so does the allocation of government expenditure. The following graph (fig. 2) gives us an idea of India’s total public expenditure on education as a percentage of GDP and as a percentage of the total budgeted expenditure. From 2012-13, there has been a gradual decline in the resources we have devoted to education. And, over 2007-08 and 2014, the average annual private expenditure per student increased by almost a factor of three from Rs. 2461 to Rs. 6788 (NSSO 2016). These expenses relate to course fees (exam fee, lab, library fee, etc.), books, stationery, uniform, transport, and private coaching. Put together, they suggest a withdrawal, albeit gradual, of the government in education and the rise of profit-making schools (see fig. 4). The deplorable combination of the decline of public education and the increase in costs of education makes education financially unsustainable for most of the poor.

Our allocation of the education budget
In this section, we provide an account of how the money is allocated to various heads at the state level. To get a sense of the wide inter-state variation, we examine the nature of allocation in Uttar Pradesh and Bihar; Bihar allocates more towards teacher training and infrastructure than Uttar Pradesh. Moreover, as a percentage of the Gross State Domestic Product (GSDP), Bihar allocates more for education than Uttar Pradesh (ABE 2012-15, p. 12).

Fig. 3: Allocation in our education budget 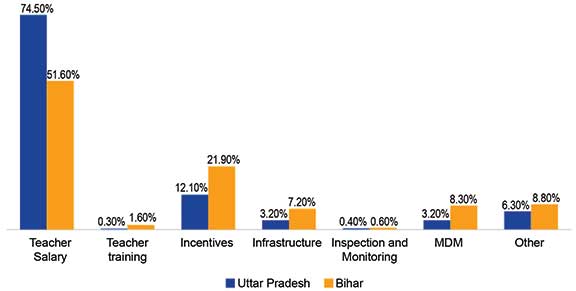 Source: How have states designed their Education budgets?, Centre for Budget and Governance Accountability (CBGA) and Child Rights and You (CRY), 2016

From the breakup of the budgets, we can see that the majority of the pay goes towards teacher salaries. While this is not a cause of concern, the fact that there is inadequate expenditure on maintenance of school infrastructure (toilets, labs, libraries, hostels) and on teacher training is very worrisome. It is not surprising that most of the public expenditure on education goes towards teacher salaries because the teacher is central to the imparting of education. However, we also need to ensure that the teachers get enough time to discuss classroom pedagogy with other teachers and experts. Since the salary is a compensation for not just teaching but also preparation, the teacher ought to be provided the time to prepare every day; in other words, if the teacher is teaching (and doing administrative work) for eight hours a day and five days a week, the learning of the students will be adversely affected. And moreover, our government school teachers should not be burdened with any other government duties such as those related to elections, health, other department schemes, panchayat meetings and so on (for a detailed study, see Reference 1).

Almost the entire government spending on education is devoted to maintenance – of school teachers and existing infrastructure. This means that India is not adding enough schools (and even labs and hostels) every year. Is it because the government believes that it should not be providing education? Is it also because the policy makers and politicians believe that education should be privatized?

Fig. 4: The fall of public education

Fig. 4 seems to suggest very strongly that the government is not interested in the provision of education.

Conclusion
The charts and tables used in this article illustrate the importance of accounting more generally, not just in the area of education but also in health, environment, and other social arenas. The manner in which data is collected, classified, and analyzed can yield useful insights. Hence, the process of accounting and budgeting is not simply a tool but a political act – an activity which helps us understand and contributes to improving our collective socioeconomic vision.

It is clear that government expenditure on education is primarily aimed at maintenance and lacks a long-term vision. However, in such a situation, a cut in government spending on education is even more worrisome because (1) it forces contractualization of the teachers, (2) it reduces the meagre resources devoted to capacity building such as teacher training, and (3) conveys the impression that education should not be publicly provided. This impression, it must be noted, arises from a lack of vision and funding, and not due to any intrinsic fault of public education.

As Bertrand Russell observed in 1916, “All that is necessary to this end is a greater expenditure of money, to secure teachers with more leisure and with a natural love of teaching.” However, a higher volume of spending on public education is not sufficient, the funds have to be released in a timely manner, and it should be spent on both maintenance and for enhancing capacity.

Alex M. Thomas teaches economics at Azim Premji University and Varun Nallur works with the Bengaluru District Institute, Azim Premji Foundation. They can be reached at alex.thomas@apu.edu.in and varun.nallur@azimpremjifoundation.org respectively.

A question of sustenance
Budgeting a small school