PK Srinivasan, or PKS as he was known, was a dreamer with his head in the world of mathematics but feet fi rmly on the ground. He was an ardent admirer and practically a devotee of the Indian mathematical genius Srinivasa Ramanujan. 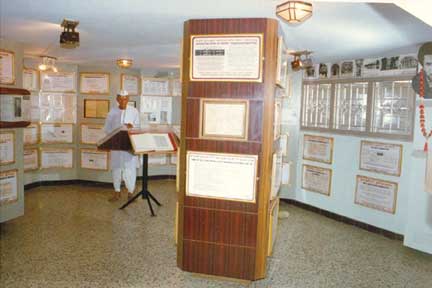 This is what he wrote in a preface to Volume 1 of the Ramanujan Memorial Number: Letters and Reminiscences he helped publish in 1968; “(the dream is to set up a) Ramanujan Memorial Foundation with the object of setting up a permanent memorial to Ramanujan in the shape of a multistoried building in Madras, housing a planetarium, mathematical exhibition wings, auditorium, library and showrooms displaying applications of mathematics in industry. It will be a house of entertainment par excellence for the layman and it will strive to make mathematics almost as popular as dance and music. We solicit generous support and help from the readers and institutions all over the globe for translation of the dream into reality.”

He had to wait for almost 25 years to atleast have a room for the memorabilia of this great mathematician and finally could accommodate it in the premises of the Avvai Cultural Academy, Royapuram, and the man who helped him realise his dream, at least partially, was Shri A.T.B Bose, a businessman interested in education.

The story of PKS’s fascination with Ramanujan and how he came to collect letters and other memorablia related to Ramanujan and how these came to be housed in the Ramanujan Museum in Chennai is a story worth recounting if only to show the power of dreams and a single-minded devotion to a cause.

PKS was introduced to the life and works of Ramanujan in 1948 through a book on “Indian Scientists’ published by G A Natesan & Co. The life sketch of Ramanujan moved him and created in him a desire to discover more about the genius.

At that time, PKS was working as a mathematics teacher in Muthialpet High School in Chennai. Through his innovative methods of teaching, PKS managed to kindle an interest in mathematics amongst his students.

PKS felt that Ramanujan’s life taught you that it was possible to reach great heights of achievement irrespective of your background if only you are true to yourself. This was something he wanted all his students to realise. He was one of the founder members of the Association of Mathematics Teachers in India (AMTI) in 1965 because of a conviction that mathematics teachers needed to have a professional platform to exchange ideas.

In 1954 PKS met Janaki Ammal and S Thirunarayanan, wife and brother of Shri Ramanujan. Subsequently he also met Ananda Rao, who was a contemporary of Ramanujan in England. He was fascinated listening to the many small and hitherto unknown incidences in Ramanujan’s life. This meeting and subsequent contacts with relatives and friends of Ramanujan encouraged PKS into thinking about collecting letters and reminiscences related to Ramanujan’s remarkable life.

In 1962, the Government of India announced the release of a special commemoration stamp marking Ramanujan’s 75th birthday on 22nd December. PKS decided to use this opportunity to bring out a memorial number on Ramanujan, containing letters and reminiscences.

With the help of his students, both former and current, he formed a committee for this purpose in October 1962. They then set about searching for contacts and institutions in India and abroad that who were connected in any way with Ramanujan.

The committee placed ads in local papers, interviewed people who had known Ramanujan and gathered letters. When he got a response to an ad or found a contact, he would immediately follow up. Often he found himself just patiently sitting while some one rummaged around in an old trunk for some half-remembered letter. Sometimes he would bring in a stenographer skilled in both English and Tamil to record a conversation.

Around the time of Ramanujan’s birth anniversary, a celebration was held in Madras to which many of Ramanujan’s relatives those who were close to him were invited. PKS exploited this opportunity by stationing former students at the entrance to the hall to solicit comments, correspondence and reminiscences.

He also visited Ramanujan’s old house in Kumbakonam and with the permission of the then tenant, searched an old almirah which had not been opened for many years and found a letter Ramanujan had written to his father from England.

Through such untiring efforts, by December 1962, the committee had collected a substantial amount of letters, documents and photographs.

On December 22, 1962, a special function was held at the University of Madras for the release of the commemorative stamp by the Governor of Madras. The committee was invited by the Mathematics Department of the University, to display their Ramanujan collection. In the special function the Vice Chancellor openly acknowledged the contribution of the committee. PKS also took a group of about 300 students and teachers in a procession from Muthialpet School to Mount Road Post Office, carrying placards of homage to mathematicians of India and bought first day covers. Because of these activities, the work of the committee became more widely known and it was able to secure many more contacts and materials.

After a delay of many years, in 1968 Ramanujan Memorial was published in two volumes; the first volume was mainly biographical while the second described his mathematical work.

These two Volumes had an impact internationally when mathematicians and biographers used these volumes extensively and mentioned them in their works. Many of them, particularly Robert Kanigel who wrote ‘The Man Who Knew Infi nity’ and Prof. Bruce C. Bernt, who researched ‘Ramanujan’s Lost Notebooks’ visited PKS at his residence and found him sharing his long cherished dream of setting up a Math City with child like enthusiasm and details of how he went about collecting the original letters, etc. with a missionary zeal.

PKS met A T B Bose through one of his old students. Bose was a businessman from North Chennai who had an engineering degree from Guindy Engineering College. Due to his deep interest in education and culture, he had decided to establish a cultural centre on a piece of land given to him by his aunt, since he felt that North Chennai was in dire need of a centre for cultural activities. Avvai Cultural Academy was thrown open to the public in November 1991 and had a meeting hall, an open air auditorium, rooms for organising activities, a library, etc. Avvai was the grand old lady of ancient Tamil literature.

PKS invited Bose to his residence to share his long cherished dream. Bose had a thrilling experience seeing the original letters and photographs related to the great mathematician’s life.

PKS’s meeting with Bose materialised in the latter agreeing to give one of the rooms in Avvai Cultural Academy for the Ramanujan Museum and Math Education Centre.

In March 1993 at a ripe old age of 83 Mr. C. Subramaniam, Ex-Finance Minister of India, took it as a privilege to travel to Royapuram to inaugurate the Ramanujan Museum and Math Education Centre (RM & MEC) at Avvai Cultural Academy.

Among the many articles on display in the Ramanujan Museum are:

Bose used his technical acumen to ensure that the exhibits were aesthetically mounted and illuminated and preserved with proper air-conditioning. The originals are displayed in such a way that one can touch them and therefore can remain preserved.

At the age of 70, PKS offered to be the Resident Curator-Director of the Museum. As the Curator-Director he stayed in a single room on the terrace. General public and the academic institutions utilized the opportunity to visit the museum by participating in workshops and conferences organised by him through its Math Education Centre wing.. He felt that a total change in math teaching methodology in the classroom and math climate in the school and the society at large was an urgent need for the Knowledge Society.

Many eminent mathematicians from the United States of America, Belgium, The Netherlands, Australia, New Zealand, Finland, Canada, Poland, Germany, Austria, France, Italy, Japan, China and Singapore have visited this museum. However, it is a sad reflection of the priorities of our society that very few schools and people from Chennai visit the museum.

PKS organised math workshops for teachers, even for parents, students and teachers together, for media. His efforts led to the Tamil Nadu government declaring Ramanujan’s birth Anniversary on 22nd December as Creativity Day.

Ramanujan Museum and Math Education Centre continue to organise workshops to propagate mathematics. It has also been trying to popularize the use of the Math Kit in schools all over India. The museum now has a separate PKS Gallery.

For all that he achieved, PKS’s dream of having a Math City in the Ramanujan Memorial Foundation still remains unfulfilled.

S Sundaram is the Principal of K D Ambani Vidyamandir in Jamnagar. He is deeply interested in enabling students to learn Mathematics and in education for the 21st century. He can be reached at kdavprincipal.jamnagar@ril.com.

Nirmala Raman is an Education Consultant working in the area of Primary Math. She is the daughter of Late Shri PK Srinivasan and is engaged in making a documentary on him. She can be reached at nirma98@yahoo.com.