For the last two years I have been going around the country visiting different schools and trying to understand the meaning of education/shiksha. Last year, during a visit to a small, innovative school in Jaunpur, a village near Mussourie, I was informed about an interesting experiment a teacher had conducted with the children. The results of the experiment had raised a lot of questions in my mind. Last week, I decided to conduct the same experiment in the school, I was working with (a small school near Dharamsala).

I drew two portraits on the blackboard, one of a typical village youngster, wearing a kurta, shorts, and slippers and the other of a city guy, clean shaven, neatly pruned hair, wearing a suit, tie and shoes and then asked the children to tell me something (qualities) about them. I conducted this experiment with two different classes and the results observed were exactly the same as those in the school at Jaunpur. 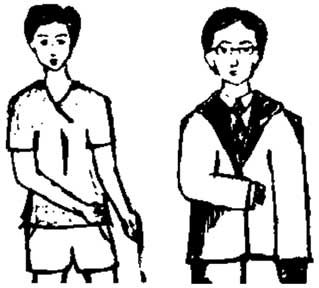 They looked at the portraits for a while and then started telling me about them. Given below are the words I wrote on the blackboard –

Despite having expected similar results, with each word that was added to the list, my mind grew more and more numb. Most of us would have expected the same. Some of us would have more or less answered the same too. However, I am sure we would also agree to there being something profoundly wrong with this kind of generalized judgment being made not only by adults but by children aged 12-14.

The experiment raises many questions –

When we delve a little deeper into the realms of education (today perceived as only schooling), we see many lacunas, one being associated with the curriculum. We see a child in Ladakh, a child in Kerala, a child in Bihar and now the Tibetan students in India, all studying the same curriculum, the same history and geography textbooks, which have nothing to do with their own culture, their own place and their own language and traditions, the traditions that at some places change after every 50-100 km and not at the state boundaries.

No wonder a child from a village (who goes to school) gradually starts to look down upon his fellow beings from villages, his own native areas (to a certain extent develops the same attitude towards his grandparents too). While on the other hand, his respect for city dwellers and their gizmos continues to grow manifold. He would rather go work in a BPO and live in a small one room apartment in a city than till his own field in his village. Isn’t it but natural that these traditions, values, knowledge systems, which were being passed on from generation to generation since thousands of years are getting wiped out?

The second subsequent question that comes to mind is – if so then why is this happening? Why are we trying to paint every child with the same colour?

Maybe that’s because the current system (with growing industries and corporate houses and supporting structures like banks) needs more people with specific knowledge and does not really value the different traditional beliefs and knowledge systems. And our education system, with its de-contextualized and partly irrelevant content, is continuously gearing itself to produce such people. It is believed that the industrial revolution bred the current educational system (not only the subjects, but the structure), which partly aims at providing more conformed people who talk the same language.

I tried to explain to the children my thoughts on education, on how education is much more than schooling. I did so by telling them stories about how wise our grandparents and people from villages are (despite not having ever gone to a modern school), how reading, writing, and doing arithmetic is only a small (and not indispensable) part of being educated, and how every person and every profession should be given equal respect. One of the stories that I told them was a real incident that I was told about during my visit to the same school in Jaunpur –

“It was the month of March. In a small school in a village, a teacher was teaching children about rainfall. The children were asked to go back to their parents and grandparents and ask them about the changing monsoon conditions and learn about rainfall. Next day, the teacher asked the children if they had learnt anything new.

One little boy got up and said that his grandfather had tears in his eyes when he asked him about rainfall and showed a desire to learn from him. (It is a rare thing for a child going to ‘Modern School’ to ask his grandparents to teach him something.)

A little girl got up and said that her grandfather says that it will rain heavily this year. Her grandfather had showed her a bird’s nest on a tree. The nest was made deep inside the tree. He told her how the birds are very good at understanding nature. They are able to predict and make their nests accordingly, on the top if it’s not going to rain much and deep inside if they feel it will rain heavily.

That year they say it did rain hard. The little girl was so proud of her wise grandpa.”

“We cannot say. We need to spend some time with both of them and know them better. Only then will we be able to comment on their qualities.”

… but at the end, the little glimpse of this huge wave of (mis)understanding that is being pushed and propagated has left me numb and depressed …

The author is currently working at Centre for Learning, Hyderabad. He can be reached at 27amitd@gmail.com.