Jyoti, one of my students, called surprisingly, after almost six months to share her achievement in the recently conducted Under-13 School Girls League. She was very excited because she had been selected for the centre of soccer excellence (a programme run by Football Delhi in collaboration with Indian Super League Club, Delhi Dynamos). Jyoti was introduced to football in class 2 in her municipal school in spite of the fact that the school could offer only concrete spaces or a classroom with no benches as a play space. She was a goalkeeper and diving on a concrete space is unrealistic, hence her friends padded up all the mats in the classroom for her as a practice area. Amidst all the challenges, she continued until she moved to class 5 and the “pressure” of studies led her to drop out of playing football. Still two years later, when there was an opportunity, the footballer in her was sparked again. A child embracing sports irrespective of the constraints faced and even after two years of staying away from the sport is evidence of her competency.

What if Jyoti had continued playing? Or what if Jyoti’s school had a proper play space and despite challenges, why and how did she excel? To reflect on these questions, a bigger question needs to be asked, “How do we perceive sports/physical activity as a society?”

Playing is instinctive and children naturally engage in play but the structuring of it in the form of a physical education curriculum or through a format of different sports and its rules is something of a complex puzzle piece. In the context of the public education system, physical education has always been acknowledged and the broader objectives articulated.

“Sports and Physical Education are an integral part of the learning process, and will be included in the evaluation of performance. A nation-wide infrastructure for physical education, sports and games will be built into the educational edifice. The infrastructure will consist of play fields, equipment, coaches and teachers of physical education as part of the school improvement programme. Available open spaces in urban areas will be reserved for play grounds, if necessary by legislation, efforts will be made to establish sports institutions and hostels where specialized attention will be given to sports activities and sports related studies, along with normal education.” – National Policy of Education 19861

School or the larger education system being an integral part of the society mimics similar patterns about approaching play. Traditionally schools have annual sports days and at a district or state level there are school wise championships which provide sporting exposure for children. When we as a society talk about sports, we talk about sports stars, medals and trophies and Olympic glory. But ironically, our total medals tally in the Olympics is 28 in 34 appearances averaging less than a medal per appearance. The challenges are deep-rooted and our narrow outlook as a society towards physical education as competitive accomplishments has exacerbated that.

A recent study done by Active Healthy Kidz2 revealed that approximately 15 per cent of children (from a sample size of 3.8 million children and youth) met recommended standards of minimum fitness. It also notes that only one-third of children and youth are accumulating the minimum recommendation of 60 minutes MVPA (Moderate to Vigorous Physical Activity) per day. So it is a paradox that we have a competitive performance-centric approach and the levels of minimum fitness, participation, achievements are not promising. The need is to bridge the participation and performance outlook which are deeply interconnected. Based on our Khel Khel Mein Foundation (KKMF) experience in working across schools and communities in Delhi since 2014, there are three key aspects which need to be addressed:

Long-term pathway: As in academia, there is a 15-18 year pathway (12-14 years of schooling and 3-4 years of undergrad) with objectives in each stage of child development; similarly in sports, a long- term framework is essential and in this context LTAD (Long Term Athlete Development) framework is an apt reference point which lays out seven key stages for an individual to progress in his or her sporting journey.

The framework takes into account the physical, emotional and social development of a person and more importantly, makes him/her active for life which has a larger socio-cultural influence. Another key aspect is to have clarity of multiple terms with overlapping perceptions such as sports, physical education, play, games. Here the concept of “physical literacy” needs to be looked at which is defined as: “As appropriate to each individual’s endowment, physical literacy can be described as the motivation, confidence, physical competence, knowledge & understanding to maintain physical activity throughout the life course.”4 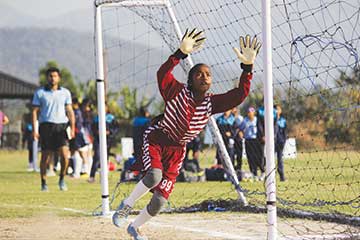 To enable physical literacy, multiple games can be used. Some of these games can be directly representative of any particular sport. PE has to be redefined from its current idea of regimented drills, marching and annual sports days. There needs to be consistency of access for children being engaged in rigorous physical activity everyday either through games, free play or any particular sport depending upon the resources. From our experience of working in schools in Delhi to enable the minimum recommended playtime within school spaces for an average school strength of 200, there is need for a space of roughly 60m X 50m and two coaches/PE teachers considering the coach to player ratio is 1:20 and a team based sport such as football or kabaddi is the medium.

Redesigning competitive exposure: Competitiveness is an inseparable part of sport but to channelize the same constructively needs redesigning of the structures. In our association with Paris Saint Germain foundation (the social responsibility arm of the famous European football Club PSG) during the KKM League, we learnt from them to design the point system based on equal weightage of results (match score) and fair play (behaviour on the ground) for Under-11 and Under-14 age groups. Even in the situation of a final game, the team with higher fair play points win. In 2012, the English football association also had restricted publication of results and league tables for teams in Under-7 to Under-11.5

We have also conducted our leagues based on “football3”6 model. This refers to a restructuring of traditional football/soccer rules to bring social and developmental benefits to participating youth and their communities. The model incorporates three “halves”: pre-game discussion, football match, and post-game discussion and the rules of the game partly being decided by both teams based on the kind of outcome they want to achieve. For example, in a mixed gender match, one of the rules can be ‘a goal will only be considered when players from both genders have touched/passed the ball.’ 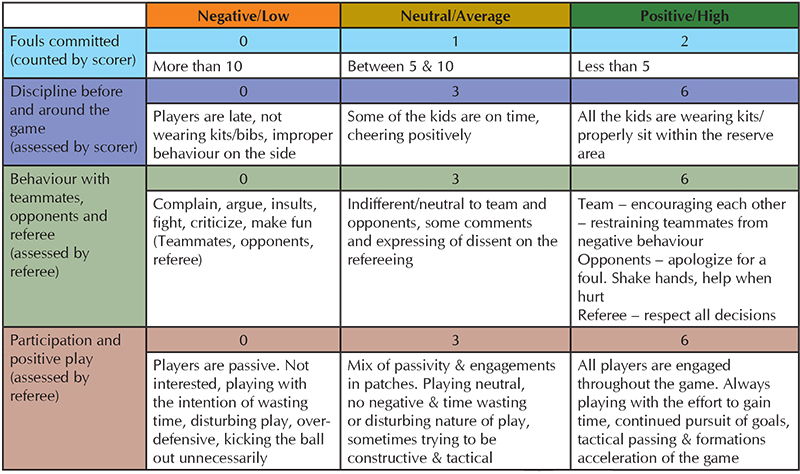 Also, if we look at competitive exposure time we are way behind what a top performing nation in any sport needs. Even if we consider after school programs in academies, we are behind. At Dinamo Zagreb, one of the leading football clubs in Croatia (finalists of 2018 World Cup) their youth teams accumulate more than 600 matches by the age of 17-18 in comparison to 150-200 in our youth competitive structure at top level. 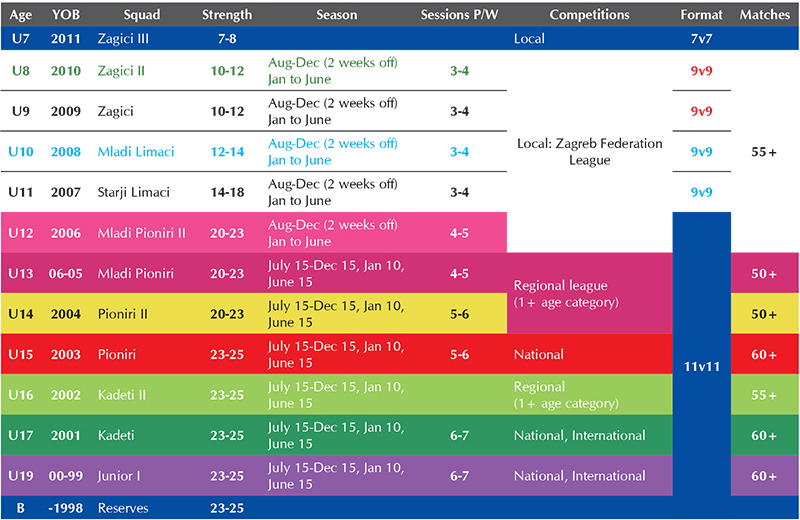 With short-term competitive structures and winning being the only focus, often the “tallest” or “strongest” students are selected and labelled as “talents” clearly making a distinction between who can and who can’t, thus demotivating a wider set of children and youth from opportunities in the competitive arena. This phenomenon is called the Relative Age Effect. 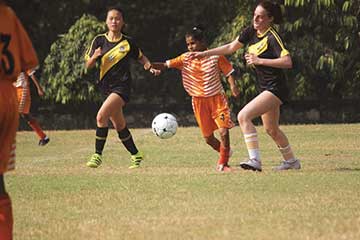 “RAE is basically a bias of selecting the oldest kids in an age group while de-selecting the youngest so that the older kids are over represented while the younger kids are underrepresented. A player born in early January is almost a full year older than one born in late December. During the teens, even a few months’ more or less physical, mental and emotional development and technical training can make a huge difference on a player’s perceived quality. The resulting rosters will show heavy emphasis on the early part of the year – with a majority born in the first two quadrants of the year.

We confuse maturity with talent. And we confuse talent because we don’t know what it is.”8

Establishing a year-long competitive exposure structure which is designed around performance, excellence and sportsmanship will be the game changer. While school games happen on a different schedule involving multiple sports, the individual sports specific championships at national or state level are generally the pathways to elite athletics. The interconnectedness of both these formats is necessary.

Parental involvement in sports: The final aspect I would point at will look at sports in a holistic way and how it can be evolved as an ecosystem instead of confining it in institutional spaces of school and sports excellence academies. In any sporting nation, it’s a cultural pattern. Parental and peer support is critical in participation of children in sports.

At KKM, we work with parents actively throughout the year to ensure continued participation over the years for a child. In the context of low-income communities, the dropout rate of children from our after-school program is approximately 22 per cent and the primary cause being parental concern of balance of academics and sports. There are gender-based barriers as well.

Parents, not being aware of the short-term and long-term benefits associated with physical literacy and sporting exposure leads to low level of participation both within school and after school spaces. There are programmes in Japan and China where parents are being informed about how informal play at home in their supervision and involvement can help children. 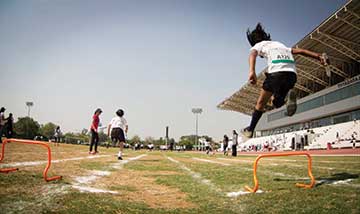 “I try to draw a big distinction between coaching and teaching. Separate the idea of a parent teaching something rather than coaching. I don’t like to use the word coaching for parents because I believe we teach our kids and so we can prepare them so that when the coach receives our kids he or she can start coaching. It’s a collective environment”. – Tom Byer” (Former professional footballer from New York)10

There are evidences that parent involvement and encouragement at an early age supporting play/sports has a long lasting effect in terms of excellence.

A national strategy for physical activity for children and youth with increased focus on parental awareness is necessary. The current perception of sports needs to be expanded into a holistic one while the competitive aspect needs localization and redesigning to achieve holistic outcomes. Finally, the need for a long-term curricula is imperative. A holistic and long-term approach involving all stakeholders will help students like Jyoti continue their sporting journey for life.

The author is the co-founder & trustee of Khel Khel Mein Foundation, an organization with the vision of nurturing a sustainable sporting culture in the most challenging communities. He has over 11 years of work experience across diverse domains of sports, education and business development. He has been a Teach For India fellow and prior to that worked with Larsen & Toubro and TATA Motors. He is passionate about sports pedagogy, community development and women’s football. He can be reached at [email protected].